Paul Mason, 59, who was once dubbed the world’s heaviest man, arrived at Gatwick from his home in Boston a month after revealing his weight has risen from 19st to 35st.

He shared a photo of himself on the plane sitting in economy. The 59-year-old said: “Well my flight back to UK went well.

“Just like thank all my friends for making this happen. And Gatwick assistance staff who went out their way to help me. Good Job.”

The ex-postman, originally from Suffolk, had life-saving gastric band surgery nine years ago when his weight left him bed-bound and firefighters had to free him with a forklift truck.

He later had two free operations at New York’s Lennox Hill Hospital to remove around 60lbs of excess skin. But his weight has now spiralled out of control again. 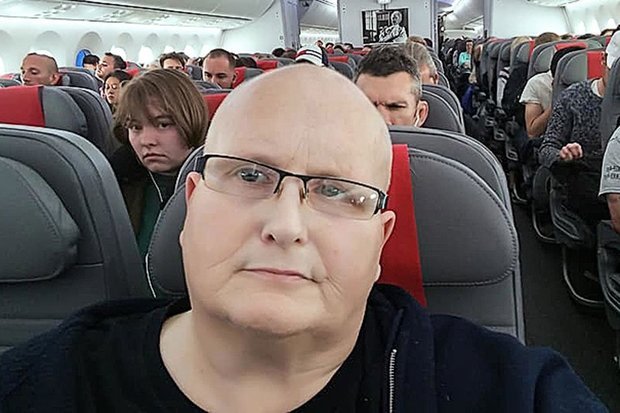 He said: “I need to return to the UK where I will be eligible for the assistance I need to get my life back on track.” It is estimated that his treatment will cost £108,000.

Paul, who moved to the US five years ago, used to live in a bungalow in Ipswich, where he spent his days in bed before the gastric band surgery.

He needed a hoist to lift him out of his bed and would watch TV in the living room where he slept.

The home was fitted with 5ft-wide doors and the bathroom had a reinforced toilet seat and bath.