Home » World News » Why stereotypes could be bad for us 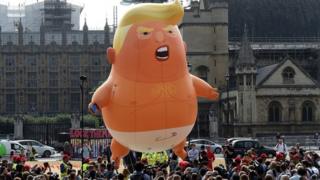 Historians may puzzle over how the UK’s Brexit debate sometimes resembled a battle between snowflakes and gammons.

“Snowflake”, used dismissively to suggest younger generations might melt if confronted with the harsh realities of life, was readily applied to the stereotypical urban Remainer.

Meanwhile, the caricature of Brexiteers as older men, cheeks ruddy with outrage, led to the insult “gammon” – an unflattering comparison with the pinkish cured pork associated with dining in British pubs.

Creating such cartoon versions of political opponents is hardly limited to the UK.

A recent study of Americans suggested Republicans vastly overestimate the proportion of Democrats who are atheist or agnostic at 36% – four times the reality. In turn, Democrats estimated 44% of Republicans made more than $250,000 (£192,000) a year. Only 2% do.

The role of social media

We develop these stereotypes partly from personal experience. But just as often, they are formed by what we hear from friends, family and colleagues.

Stereotypes are further reinforced by social media, where we can gain likes and followers by calling out opponents.

Research suggests polarisation can increase voter turnout, which may encourage political leaders to further sharpen divisions. The media, propagandists, and foreign agents can profit from fanning these flames.

It all creates the impression of two deeply disconnected groups in societies around the globe – the left and the right.

How we overestimate our differences

Yet, while polarisation in many nations appears to be at historically high levels, research by the More In Common initiative – an international body studying polarisation – suggests people vastly overestimate political differences.

Prof Anne Wilson, a psychologist at Canada’s Wilfrid Laurier University, says: “Misjudgements of the other side aren’t arbitrary: people are more likely to overestimate the proportion of opponents who hold the more extreme or unflattering views linked to their party. But we also see blindness to common ground.”

As an example, she says the portrayal of US gun control as a “two-sides” issue obscures shared beliefs. This includes strong support among both Democrats and Republicans for background checks and a higher minimum age for gun owners

A season of stories about bringing people together in a fragmented world.

Finding empathy for others

People can be reluctant to mix with those they assume to be different from themselves. But without these interactions, we lose the capacity for reality checks and to see the humanity in others.

Language can fuel polarisation. When people use moral and emotional words on Twitter – like “evil”, “lewd”, or “sin” – messages spread more virally within (but not between) their social networks.

But some of our research, led by Mina Cikara, a professor of psychology at Harvard University, found that when people are shown images suggesting the social networks of different groups are quite overlapping, empathy for members of the opposing group increases.

The benefits of co-operating

Democracy is built upon on our ability to vigorously disagree but ultimately find sufficient common ground to forge a consensus.

If left and right co-operated, societies might be better placed to address challenges in areas like health care, the climate, education or terrorism.

Teaching people about how often political polarisation is overestimated might help, suggests research by Prof Cikara and Jeffrey Lees.

Prof Cikara says: “People are smart and responsive. When we let them know that they were wrong about how upset the other side might be in response to a policy, they also updated how much they said the opposing party is driven by malicious obstruction.”

When members of different groups are reminded that they hold important identities in common – for example as part of a nation, or international community – relations improve and co-operation emerges.

In studies, we have created new groups in the lab from a simple flip of a coin. We had people join a team that included members of their own racial group, as well as members of another race. Within minutes, participants showed lower levels of racial bias.

By using functional magnetic resonance imaging – like the MRI scans doctors use to detect brain injury, but tracking changes in blood flow – we monitored activity in regions of the brain that indicate emotions or perceptions.

The brain data, in particular, suggested that when people understood themselves as part of a common group, they began to see one another as individuals.

When people feel stereotyped, they are less likely to listen and conflict escalates. By signalling that you see someone accurately, you can take the first step towards restoring a sense of common humanity.

What you can do to change the way you see others

A recent example of this came from former US Navy Seal James Hatch, who described his experience of enrolling as Yale’s oldest first-year undergraduate, aged 52, last year.

This analysis piece was commissioned by the BBC from experts working for an outside organisation.

Over the weekend, the release of Guns Akimbo was put into question after its director Jason Lei Howden launched a vicious Twitter