Colombo, Sri Lanka: As Sri Lankans waited hours in line for fuel, sweated through the springtime heat during daily power cuts, and watched the value of their incomes erode.

Sri Lanka was supposed to be a post-war success story, a fast-developing economy committed to healing after decades of conflict. Instead, it is the latest democratic nation backsliding into authoritarianism, under the misguided policies of a ruler who critics say is more focused on protecting his family’s political dynasty than the country’s fledgling institutions and economy. 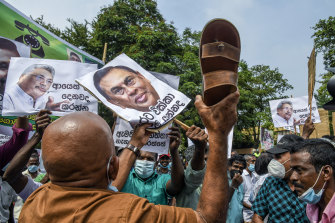 Thousands demonstrate against the government of Gotabaya Rajapaksa, seen in signs at left and right, over power cuts and the lack of essential products in Colombo.Credit:Atul Loke/The New York Times

“This crisis was not created by me,” President Gotabaya Rajapaksa said in an address last month, urging the nation to “have faith” in his actions and blaming forces beyond his control.

Tens of thousands of protesters are now swarming the streets of the capital, Colombo, and clashing with security forces outside the ruling family’s official residences. They are running low on essential goods and patience — and demanding that the president step down.

To ensure his family’s political future, Rajapaksa, 72, has undermined the criminal justice system, jailed dissenters and quashed the opposition. He has drastically expanded his presidential powers, stocking the government with his relatives, fellow military men and right-wing monks aligned with his law-and-order mindset. 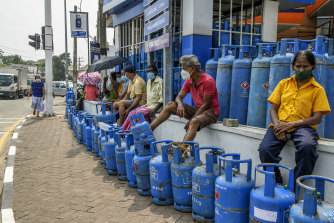 It has left the country ill-equipped to deal with a growing economic and debt crisis. Its coffers are all but drained after the island nation was closed to tourists for much of the coronavirus pandemic and after a series of policy missteps. This week, the government said it was suspending payments on its international debt, a signal that economic conditions could get worse.

Now, it is trying to conserve cash for emergency supplies of fuel and other basic goods. The fertile country that produces some of the world’s most sought-after tea is facing widespread food insecurity. And protesters are filling the streets of Colombo, many of them young professionals who had taken for granted that they would have steady electricity and internet service, access to imported coffee and cars, as well as a promising future.

Shathurshan Jayantharaj’s fleet of delivery trucks came to a halt when diesel supplies dwindled. Jayantharaj, 25, has been protesting in Colombo nearly every day against what he sees as the incompetence of the Rajapaksa-dominated government.

“We might have achieved a lot, but we are losing it all right now,” he said. “This family does not know what it is doing, and they’re taking us all down with them.”

Campaigning for office in 2019, Rajapaksa promised to restore safety and solvency to a country still reeling after more than 250 people were killed in a series of suicide bombings on Easter Sunday that year. His war-time record gave him credibility. 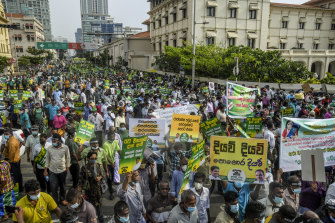 As defence secretary when his brother, Mahinda Rajapaksa, was president, he and his family were hailed for ending the country’s civil war in 2009 and for creating an economy that became a model for other nations seeking to rebuild. He benefited from the public outrage over evidence that the government at the time had ignored warnings about the terrorist attacks.

Rajapaksa won in a landslide election.

The atmosphere almost immediately shifted. The lead detective for the Criminal Investigations Department, or CID, which had been spearheading investigations into the Rajapaksas, fled to Switzerland. Prominent journalists, diplomats and other security officials rushed to leave.

Their fears were not unwarranted. Rajapaksa has expanded the use of an anti-terror law that the European Union and United Nations say has led to “consistent and well-founded allegations” of human rights abuses to jail hundreds of people. 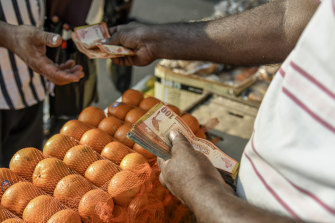 Hejaaz Hizbullah, a prominent Muslim human rights lawyer who challenged Mahinda Rajapaksa’s power grab during a constitutional crisis in 2018, was among them, jailed on charges of hate speech.

After more than a year and a half, Hizbullah, who denies the charges, received bail in February. He wants to speak for those he says are unfairly incarcerated under the terror law, but fears retaliation.

“I’m an accused and it’s stifling,” he said.

Rajapaksa also established a Presidential Commission of Inquiry, a tool that critics say has been used to reverse court judgments, pardon political allies and shield the family from allegations of wartime atrocities.

Shani Abeysakara, the CID director who worked on the handful of human rights cases that made headway under the previous president, has found himself before the commission more than 40 times.

In Rajapaksa’s first month in office, Abeysakara was demoted to the personal assistant of a provincial police chief. He was later arrested and jailed on charges of fabricating evidence in the case of a former high-ranking police official close to Gotabaya Rajapaksa who was convicted of murdering a businessman. The police official was acquitted of the charges last March.

Rajapaksa has also centralised power in the president’s office, giving himself the ability to appoint and dismiss ministers, preside over formerly independent commissions and set economic policy with few checks and balances.

He used his newfound powers to turn the Sri Lankan government into something resembling a family firm, appointing his three brothers to the most plum ministerial posts: Mahinda as prime minister, Chamal as minister of defence, and Basil as finance minister.

When Basil Rajapaksa took the post, the economy was already highly leveraged with dollar-denominated debt. It was also running low on dollars to buy essential imports, such as medicine and fuel.

Despite the challenges, the new government cut taxes and started printing money, hoping to generate local industry. Instead, people spent the extra cash importing cars and other foreign goods. Then, when the pandemic hit, the country’s two prime sources of dollars — tourism and remittances from Sri Lankans living abroad — collapsed.

In order to save dollars, the government started banning imports. In April 2021, the Rajapakas declared that Sri Lanka would immediately shift to organic farming, imposing an import ban on fertiliser.

The shock — and the condemnation — were swift.

“There is a saying that a famine comes after an epidemic,” said Muditha Perera, a rice growers’ association president. “However, the famine which is going to occur was invited by the government and not a natural one. This government has deliberately destroyed the country’s agriculture.”

The government has received donations from China of rice, a staple, and paid a premium to import additional supplies of it from Myanmar.

Basil Rajapaksa acknowledged the country was “facing a dangerous foreign exchange crisis,” but he ignored economists’ pleas to seek help from the International Monetary Fund. He also refused to answer questions about the country’s balance sheet with members of parliament, including those from the ruling coalition.

The Rajapaksa government finally bowed to pressure to let the rupee float, and it quickly sank. Not even Gotabaya Rajapaksa’s announcement last month that his government was in talks with the IMF for a bailout has helped it recover.

The Finance Ministry has suspended payments on about $US7 billion in debt to bondholders, institutions and countries that have lent the country money. Warning of a potential default, the country is trying to negotiate with creditors, and will have trouble borrowing until an IMF agreement is reached.

“We are getting paid the same as we did before, but everything costs a lot more now,” said 28-year-old Lozaine Pereira, a freelance filmmaker who was among a noisy crowd pushing against the barricades at a protest outside the prime minister’s residence this month. “Just living day to day has become a struggle.”

As the protests gain steam across the country, the Rajapaksas are increasingly vulnerable.

Many of the president’s relatives resigned en masse from their government posts last week, in a seeming effort to appease the protesters. But the demonstrators have continued to gather, setting up tents and portable latrines along an oceanside park in Colombo for the long haul.

The Rajapaksas’ usual hard-line tactics — denouncing opponents and jailing critics — are proving less effective against a spontaneous wave of discontent among a public that is harder to silence.

“The same people who voted him into power are on the streets asking him to get out,” said Brandon Ingram, a creative director at an ad agency in Colombo who has joined the protests. “So, is he going to leave?”

This article originally appeared in The New York Times.