Free speech fears over hate crime crackdown: Warning over new law to tackle anti-trans slurs… but there will be ‘protection’ for right to say you can’t change sex

The Law Commission set out proposals including measures that would lead to tougher sentences for stirring up hatred against transgender people.

The Government’s official advisers on legal reform also proposed granting special protection from prosecution for those who express ‘gender critical’ views, such as feminists voicing doubts that a man can change his sex to female.

But despite that concession, critics warned the drive towards ever-more proscriptive hate crime laws was damaging to free speech, with one saying the proposals risked a form of ‘state fascism’.

Under the Law Commission’s proposals, ‘stirring up hatred’ under the Public Order Act 1986 should be extended to cover ‘transgender and gender diverse’ people, as well as the disabled. Judges should be given the power to hand longer sentences to offenders who target transgender people in crimes such as assault, its 545-page report added.

But it rejected the idea of adding sex and gender to the so-called ‘protected characteristics’ under the law, which allow crimes against those groups to be treated more seriously by the courts.

As a result, the proposals mean some offences against transgender people could attract longer jail terms than those aimed at biological women.

It comes after repeated attacks on Harry Potter author JK Rowling for expressing concerns that women’s rights are being eroded by trans activists. 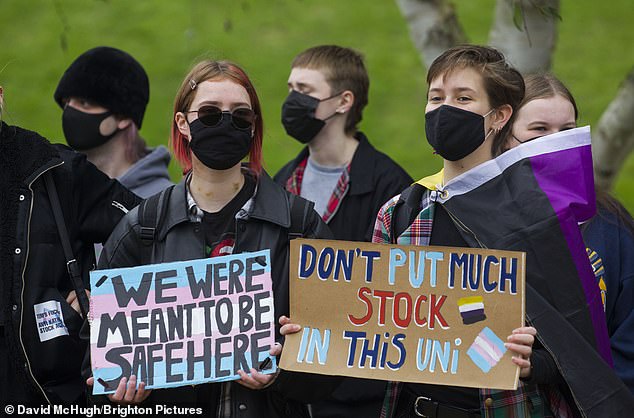 And in October philosopher Professor Kathleen Stock resigned from her academic post at the University of Sussex after being accused of ‘transphobia’.

Dr David Green, chief executive of the Civitas think-tank, said: ‘The Law Commission’s proposals will do nothing to protect Kathleen Stock or JK Rowling.

‘The law in a free society should allow people to know whether they will be arrested or not. We are creating more and more areas where people can never quite be sure of that. The outcome is that people are fearful of expressing their views.

‘The law does not belong in the realm of opinion, unless those speakers stray into an incitement of violence.’ Harry Miller, of the free speech pressure group Fair Cop, who was investigated by police for retweeting an allegedly transphobic limerick, said: ‘The law is moving from protecting the individual towards protecting and regulating ideologies, and that is a form of state fascism.

‘The Law Commission has said that gender critical views should be exempt but that is the wrong way to look at it. We should never need permission to criticise an ideology. That permission should be taken for granted.’

Professor Penney Lewis, criminal law commissioner at the Law Commission, said: ‘Hate crime has a terrible impact on victims and it’s unacceptable that the current levels of protection are so inconsistent.

‘Our recommendations would improve protections for victims while ensuring the right of freedom of expression is safeguarded.’

The report also said discussion of immigration should be excluded from race hate laws. It stressed the importance of open debate over policy on ‘immigration, citizenship and asylum’.

Some campaigners had argued that ‘migration and asylum status’ should be included in hate crime measures.

The Law Commission’s proposals will now be considered by ministers, who will decide whether to implement them.

What’s been proposed – and who by?

A RAFT of changes which will significantly extend the reach of hate crime laws in Eng- land and Wales. They have been proposed by the Law Commission, an independent panel of experts including judges and academics who act as the Government’s official advisers on changes to the law in England and Wales.

Why are the proposals controversial?

Some of the commission’s most contentious suggestions hinge on the way the law should be enhanced to deal with hate crime against transgender people, while at the same time they rejected some similar proposals which would have created new types of hate crime against biological women. New measures to deal with extreme misogyny are also proposed in the 545-page report. More broadly, the very existence of hate crimes is opposed by some commentators, who say they can lead to a ‘chilling effect’ on open debate.

What’s this got to do with free speech?

Violent acts and threats should – of course – be made illegal by criminal law. But libertarians argue that discussion of ideologies should be free game in a democratic society. The further hate crime is extended beyond individuals and into subjects such as trans rights, the more dangerous it is for free speech, they say.

Ministers will consider the Law Commission report and decide which parts they want to take forward. Anything they adopt will require Parliament to change the law, and will take time.

Call to outlaw incel ideology to tackle violence against women

Hate crime laws should be extended to cover extreme misogynists who incite attacks on women, the report advised.

‘In response to the growing threat of “incel” ideology, and its potential to lead to serious criminal offending, we recommend the creation of an offence of stirring up hatred on the basis of sex or gender,’ its report said.

The report added: ‘What we are referring to is threatening or abusive material which incites and glorifies violence, including sexual violence, against women and girls, and praises men who murder women.’

It referred to the case of Jake Davison, 22, who shot five people dead in Plymouth in August. He had posted a series of hate-fuelled online rants inspired by the ‘incel’ movement, which espouses violence against women whom they blame for their inability to form sexual relationships.

Extreme views at the dinner table WON’T be criminalised

Proposals that would have criminalised hate speech around the dinner table have been dropped.

The Law Commission had planned to end an exemption to hate speech laws that applies to views expressed in a dwelling.

A consultation paper published last year suggested scrapping the ‘poorly targeted’ exception, as a public meeting could take place in a home and a private conversation could take place outside a home.

But after an outcry – highlighted in the Mail last November – the commission has U-turned in its final proposals published today. The paper said: ‘We consider this exception to be poorly targeted. For example, the exception would protect a public meeting in a private house, but not a private conversation in a family’s car or holiday accommodation.’

Instead, it suggested replacing the exemption with a broader exception for ‘private conversations’. The paper said: ‘We have concluded that simply repealing the dwelling exception would not strike the right balance between the need to protect against propagation of hatred and incitement to violence and illegality, and respect for a person’s private, home and family life.’