‘It makes our hearts sink into our boots’: Villagers in Warwickshire reveal despair at HS2 works that have ‘devastated’ beauty spot to make way for tunnel

Villagers have revealed their despair at HS2 works that ‘devastated’ a beauty spot to make way for a tunnel.

The Cromwell Lane bridge in the Warwickshire village of Burton Green used to be a ‘wall’ of foliage, but is now adorned with just a few tree trunk stumps barely a foot tall.

The ‘deforestation’ of the green walkway, which is used by roughly 150,000 people a year, has come as a shock to those who have lived in the village for decades.

‘Every time we see it now our hearts sink into our boots,’ says Rona Taylor, chair of the local village residents’ association.

‘Every time we see (the new view) it makes your heart sink into your boots – it’s utter devastation,’ she said. 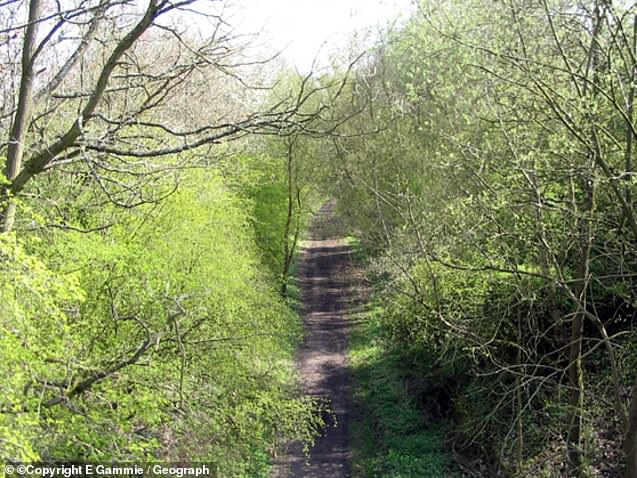 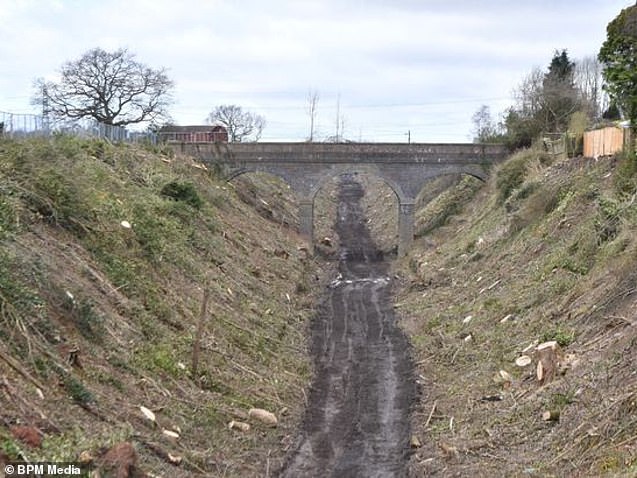 Pictured: The Kenilworth Greenway in the Warwickshire village of Burton Green, before and after 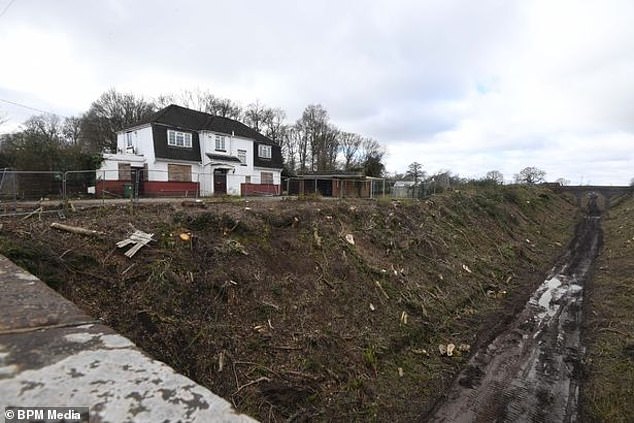 Pictured: A house next to the cleared Kenilworth Greenway which will be demolished so HS2 can access the area 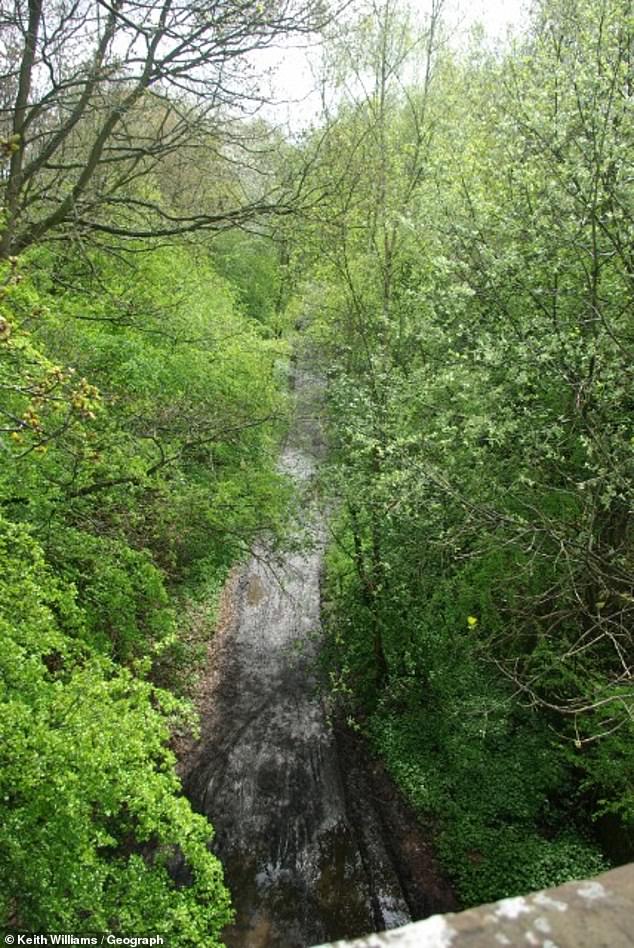 Parish councillor Paddy Deeley says the villagers’ 11-year battle with HS2 has left her unable to say if she even thinks the line is a good idea for the country or not (pictured: An old image of the route)

The anxiety over the changes to the village convinced one elderly couple to move ‘at a time when that was the last thing they needed’, Mrs Taylor said.

‘The community has been fighting this injustice since March 11… 11 years ago,’ she added. ‘It’s been a very, very sad time. People were using the Kenilworth Greenway more than ever during the lockdown last year.’

A temporary alternative ‘green way’ has been made available for locals to use.

Parish councillor Paddy Deeley says the villagers’ 11-year battle with HS2 has left her unable to say if she even thinks the line is a good idea for the country or not.

Talking about the change to the Kenilworth Greenway and the loss of trees from two ancient woodlands nearby, Cllr Deeley said: ‘Some people might come here and think the view towards Coventry is great when they didn’t know what was there before.

‘I find it very strange. It’s all very sad, really.’ 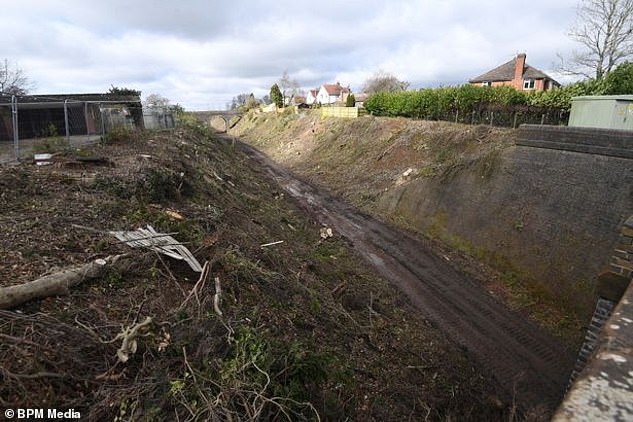 Overlooking the scenery is an abandoned detached house at 406 Cromwell Lane whose only remaining purpose might be to inspire the cover picture for a Stephen King horror novel.

Like two smaller detached houses across the road, this property is to be demolished so that HS2 can build a one-mile tunnel.

The ‘tunnel’ that’s about to begin will be cut through the land and covered over rather than deep bored.

Just clearing the Kenilworth Greenway – a near 50-year-old walkway fashioned from the 1884 Berkswell to Leamington railway line – has taken months of work.

And, as Mrs Taylor says, it wasn’t just the sound of chainsaws that was the problem.

‘The destruction of this environment just seemed to be non-stop,’ she says.

‘They started late last summer and, although the ”deforestation” was supposed to have been completed in February they have only just finished.

‘Soon they will be handing over to the sub-contractors who will start the work to build the tunnel.’ 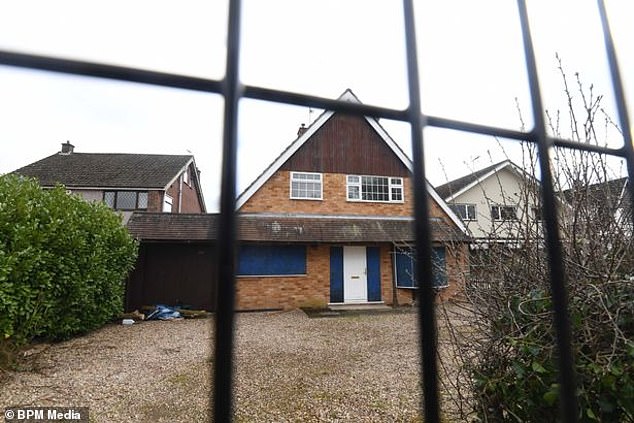 Pictured: One of the houses due to be demolised by HS2 along with No 406 Cromwell Lane directly opposite 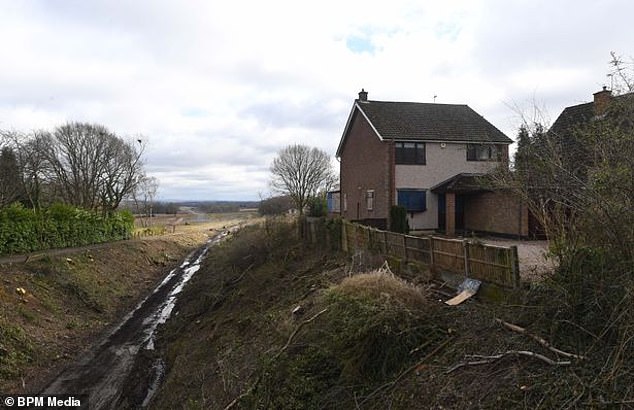 Neighbours of the new Village Hall site on Red Lane have sold their house to HS2 because of the busy footpath appearing next door – along with the prospect of construction traffic building both the tunnel and the hall at the same time.

According to the national cycling charity Sustrans, the Kenilworth Greenway is National Route 523 running from the outskirts of Kenilworth to Burton Green.

Sustrans says it is 2.3 miles long, with those on two wheels able to cover that distance in 12 minutes thanks to a path that is now 99.5 per cent tarmac.

It is also part of a circular route including National Route 52 that’s seven miles long and takes in the University of Warwick campus.

The temporary Greenway has crossing points over three roads. They are Waste Lane, Hob Lane and Red Lane.

Walkers and cyclists can use Burrow Hill Park and nearby footpaths. There is access to the Greenway at Crackley Lane and Coventry Road.

An HS2 spokesperson said the Greenway project had focused on conserving the remaining sections of the Kenilworth Greenway.

Its realignment would help to protect ancient woodlands and in time its linear, tree-lined characteristics would be re-established to ‘ensure environmental and historical connectivity’.

A spokesman said: ‘We have a process in place which involves informing the local authorities and the community through our engagement work.’

With work progressing at other sites including Water Orton, HS2 added: ‘We are always looking to minimise our impact on the community and environment as we build Britain’s new low-carbon railway.

‘HS2 has provided contracts for hundreds of local companies and is creating around 7,000 jobs in the region, so people and businesses in the Midlands are already benefitting from the project.’