The United States has lavished praise on Taiwan's response to coronavirus crisis, kicking off the highest-level meetings between the two governments in decades amid intensifying geopolitical tensions with China.

The meeting between US Health Secretary Alex Azar and Taiwan's President Tsai Ing-wen is set to further strain relations with Beijing, which maintains Taiwan is a renegade province that belongs to China. 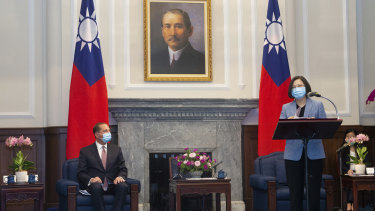 Azar is the highest-ranking US cabinet official to visit Taiwan since 1979 after decades of convention saw minimal official contact to appease the Chinese Communist Party. Taiwan and China split after years of civil war forced China's former government, the Kuomintang, to withdraw to Taiwan in 1949.

Azar said on Monday that he was representing the White House. "It is a true honour to be here to convey a message of strong support and friendship from President Trump to Taiwan," he said.

"Taiwan’s response to COVID-19 has been among the most successful in the world, and that is a tribute to the open, transparent, democratic nature of Taiwan's society and culture."

The island has recorded just 480 cases of the coronavirus and seven deaths since the beginning of the pandemic despite its geographic proximity to China. The Taiwanese Health Department role-played a virus emerging from China for more than a decade after the SARS crisis to prepare the country for a pandemic. It was one of the first to shut down travel and institute screening measures on flights from China in January.

The US has recorded the highest number of coronavirus infections in the world with 5 million cases and 165,000 deaths.

Lowy Institute research fellow Natasha Kassam said the crisis had shown the White House had little appetite for taking the advice of health experts at home.

"It does feel as though it is more about symbolism and delivering messages to China than about Taiwan's public health successes," the former Australian Department of Foreign Affairs official said.

The US is engaged with multiple disputes with the Chinese Communist Party over the South China Sea, Hong Kong and internet censorship and has been ramping up its concerns ahead of the November presidential election.

But Kassam added Australia should also look to create more international space for Taiwan as "the avenues for peaceful reunification evaporate" and Beijing's looks to increasingly assert its territorial ambitions through a military build up in the region. Australia and the US noted their support for Taiwan’s membership in international organisations for the first time in July in a joint communique from the Australia–US Ministerial Consultations.

"The rest of the world only has bandwidth for the terrible stories that we hear out of Xinjiang or Hong Kong but I don't think Beijing's attention has wavered," she said.

"It is very much in Australia's interest to prevent conflict in the Taiwan strait. The question does ultimately come down to how much the international community is willing to commit to deter action of that nature."

Kassam said Australia has demonstrated it was ready to take a principled stand over Hong Kong and other issues that have angered Beijing and should go further by supporting Taiwan's increased diplomatic presence or initiating talks on a free trade agreement.

Former foreign minister Julie Bishop said Australia walked away from plans for a free trade agreement with Taiwan in 2018 after China warned any deal would hurt relations between Beijing and Canberra. The government maintains it has no plans to begin trade consultations with Taipei, where Australia sends $10 billion in exports each year.

Fiona Fan, the director-general of Taiwan's de facto consulate in Australia, the Taipei Economic and Cultural Office, said Taiwan has long been an outpost for the democratic frontier.

"The current geopolitical situation underscores Taiwan’s importance in maintaining regional stability and peace," she said. "It is now ever the more important for like-minded countries to work together."