Washington: The Justice Department is exploring “all options” to challenge Texas’s restrictive abortion law, Attorney General Merrick Garland said on Monday, as he vowed to provide support to abortion clinics that are “under attack” in the state and to protect those seeking and providing reproductive health services.

The move by the nation’s top law enforcement official comes just days after the Supreme Court refused to block a Texas abortion statute that bans the procedure as early as six weeks into pregnancy with no exceptions for rape or incest. The court’s action stands as the most serious threat to Roe v Wade, the landmark ruling establishing a woman’s right to abortion, in nearly 50 years. 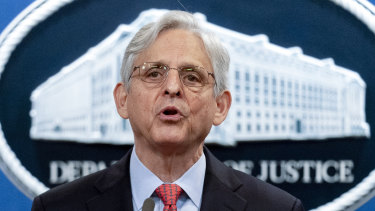 President Joe Biden has sharply criticised the high court’s decision, and House Speaker Nancy Pelosi, has pledged to call a vote later this month on legislation that would enshrine a woman’s right to an abortion into federal law.

Garland said the Justice Department has reached out to US Attorneys’ offices and FBI field offices in Texas to “discuss our enforcement authorities”.

“The department will provide support from federal law enforcement when an abortion clinic or reproductive health centre is under attack,” Garland said.

Garland’s move, like the new law, will probably reverberate well beyond Texas state lines. Republican officials in at least seven states across the country have suggested that they may change their states’ laws to mirror the legislation in Texas. And abortion activists expect more copycat bills to follow, as state legislatures this year have already enacted dozens of abortion restrictions.

The Texas law also allows anyone to file a lawsuit against any other person who has aided someone in obtaining an abortion, with the potential for a $10,000 payoff.

While some previous attempts by GOP state leaders to outlaw abortions have failed, Texas’ bill may provide other legislatures a blueprint to pass legal scrutiny. The law was designed to turn away pre-enforcement challenges in federal courts and allows private citizens to bring suit against abortion providers or anyone who “aids or abets” the procedure. 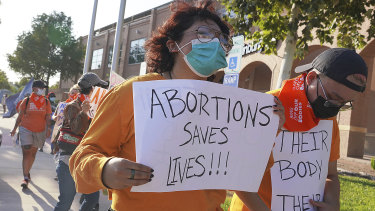 Abortion providers say the ban effectively eliminates the guarantee in Roe v. Wade that women have a right to end their pregnancies before viability, and that states are barred from imposing undue burdens on that decision.

Biden has denounced the Texas law as “almost un-American” and said it creates a “vigilante system” under which private citizens are empowered to police the ban.

“I have been and continue to be a strong supporter of Roe v Wade, number one,” Biden said Friday morning. “And the most pernicious thing about the Texas law, it sort of creates a vigilante system where people get rewards to go out and to – ” He did not finish the thought.

He added that “it’s almost un-American, what we’re talking about,” emphasising that he was referring to the Texas law and not to the broader debate over Roe. He notably did not use the word “abortion” in his remarks.

“I was told that there are possibilities within the existing law to have the Justice Department look and see whether there are things that can be done that can limit the independent action of individuals in enforcing . . . a state law,” Biden said.

Garland said in his statement that the Justice Department has “consistently” pursued criminal and civil violations of the FACE Act for decades and will continue to do so.