This is the awkward moment Ursula von der Leyen was left without a seat during a summit in Turkey when her male counterparts grabbed the only two available chairs – before the trio discussed women’s rights.

Video shows how Von der Leyen was left standing to one side and uttered an audible ‘ahem’ as Michel and Erdogan took the only two available seats – with neither offering her their chair even after she protested.

She was instead left to perch on a nearby sofa, positioned a distance from the two men, as they held two and a half hours of talks on Turkey’s relations with the EU, including Erdogan’s decision to withdraw from a treaty protecting women’s rights.

Von der Leyen’s spokesman said afterwards that Turkey had breached protocol by failing to offer her a chair, as it has done to other male commission presidents in the past, but that she decided to ‘prioritize substance over protocol’ by staying. 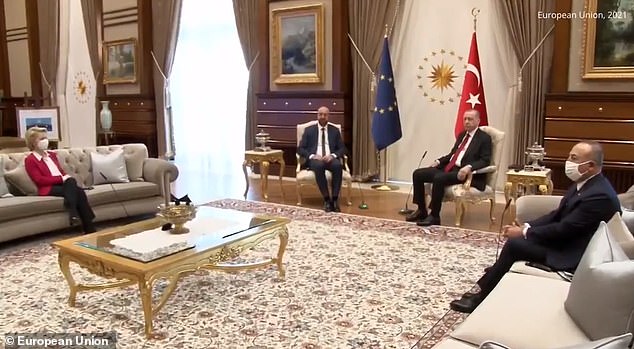 Von der Leyen, who could be heard uttering an irritated ‘ahem’ as the men sat down, was left to perch on a nearby sofa during two and a half hours of diplomatic talks

But, the spokesman added, ‘let me stress that the president expects that the institution that she represents to be treated with the required protocol, and she has therefore asked her team to take all appropriate contacts in order to ensure that such an incident does not occur in the future.’

Diplomatic protocol dictates that the EU commission president and council president, holding equal rank, should be seated in an equal manner.

None of the leaders mentioned the incident in press conferences held after the summit, but Von der Leyen’s spokesman opened up about it today after footage of the moment went viral on social media.

‘The important thing is that the president should have been seated exactly in the same manner as the president of the European council and the Turkish president,’ EU commission chief spokesman Eric Mamer said, adding that Von der Leyen was surprised by the arrangements.

The diplomatic incident was abundantly commented on social media.

European lawmaker Sophie in ´t Veld posted pictures of previous meetings between Michel´s and Von der Leyen´s predecessors with Erdogan, with the trio of men sitting in chairs next to each other.

‘And no, it wasn´t a coincidence, it was deliberate,’ in ‘t Veld wrote on Twitter, questioning why Michel remained ‘silent.’

The move was a blow to Turkey´s women´s rights movement, which says domestic violence and murders of women are on the rise.

Von der Leyen called for Erdogan to reverse his decision to withdraw from the Istanbul Convention.

‘Human rights issues are non-negotiable. We were very clear about that. We urge Turkey to reverse its decision because it is the first international binding instrument to combat violence against women and children,’ she said.

Asked whether the commission regarded the incident as specifically gender-related, Mamer said Von der Leyen traveled to Ankara as the president of an EU institution.

‘Being a man or a woman does not change anything to the fact that she should have been seated according to the very same protocol arrangements as the two other participants,’ Mamer said.

‘She seized the opportunity to specifically tackle the Istanbul convention and women’s rights. I believe that the message sent was clear.’

Meanwhile Mr Michel used a post-meeting press conference to call on Turkey to resolve disputes with Greece and Cyprus over gas rights in the Mediterranean.

A row between Turkey and EU members Greece and Cyprus over offshore jurisdiction has strained ties, reaching a peak last summer when Turkish and Greek navy frigates escorted vessels exploring for hydrocarbons in disputed waters.

The European Union backs Athens, while Ankara has accused the bloc of bias and of not honouring its pledges under a 2016 migrant deal.

The visit by Michel and European Commission President Ursula von der Leyen follows an EU summit last month at which the bloc said work could begin on deeper trade ties and on providing more money for refugees in Turkey.

Despite concerns over what some European leaders call recent Turkish backsliding on human rights, the EU has applauded Ankara’s recent withdrawal of vessels operating in disputed waters and restarting talks with Greece. 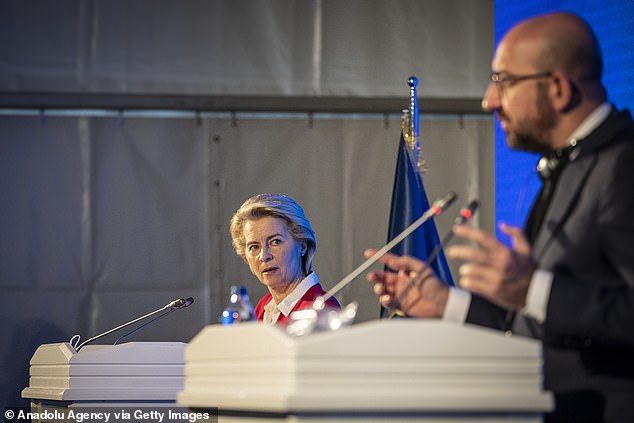 Neither Von der Leyen nor Michel mentioned the issue at a press conference afterwards, but a spokesman said today that Turkey had breached diplomatic protocol

‘In Ankara, ready with (von der Leyen) to start discussion with (Erdogan) on the future of EU-Turkey relations,’ Michel said on Twitter.

‘Sustained de-escalation is needed to build a more constructive agenda.’

The EU last month opened the door to begin updating a Customs Union as demanded by Ankara.

This would bring EU candidate Turkey into the internal market of the world’s largest trading bloc and allow unhindered flow of goods and services.

Erdogan has downplayed EU membership in recent years and few analysts see it as imminent.

The EU chiefs, who last held in-person talks with Erdogan a year ago, were expected to present Ankara with three options if the maritime de-escalation continues, including improving economic ties, a formula to support the more than 4 million refugees in Turkey, and ways to increase contacts.

‘We are no longer in an emergency situation so this is more about working for a longer-term perspective,’ an EU official said.

At the summit last month, the EU also warned Ankara of sanctions if it restarts energy exploration in disputed waters and voiced concern over Turkey’s human rights record.

Michel and Von der Leyen are expected in Ankara to stress that the EU will not approve closer ties without fundamental rights being honoured.

Both the EU and the United States have criticised a move by Turkey to abruptly withdraw from a convention protecting women from violence, as well as a legal case to shut down the third biggest party, the pro-Kurdish Peoples’ Democratic Party.