Out of odour! Unruly air passenger shoves his foot under a fellow traveller’s nose and tells her to smell his sock after she complained about him taking off his shoes

An air passenger has been caught on camera lifting his foot to a fellow traveller’s face telling her to sniff his sock during an argument on a plane in China.

Footage released by Chinese media shows the man shoving one of his feet under the woman’s nose after she told him not to take off his shoes and sit with his legs crossed on his seat.

He said to the woman ‘here you go, smell’ on the domestic flight by Sichuan Airlines, according to a report. 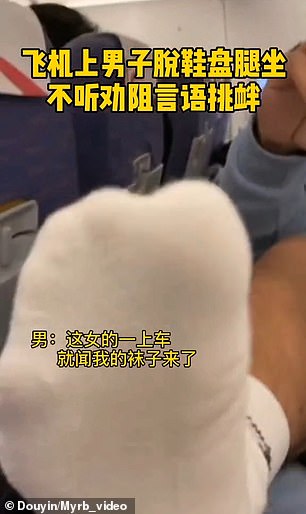 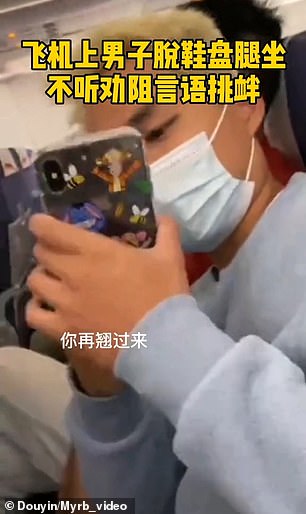 A Chinese air passenger has sparked public uproar after being caught on camera thrusting his foot to a fellow traveller’s face and saying ‘here you go, smell’. He has apologised, a report said

The man, who remains unidentified, has reportedly apologised to the woman after the clip caused an outcry on social media.

According to Mianyang Daily, which released the video yesterday, the incident took place on Sichuan Airlines flight number 3U8669 on September 5.

The Airbus A320 took off from the southern Chinese city of Kunming at 7:20am, bound for Chengdu in south-western China.

The clip, believed to be taken by the woman, starts by showing the man with both of his legs on his seat.

He appears to be filming the woman as she demands he stop sticking his feet towards her.

The man, who wears a face mask, then begins to speak towards his phone as he seemingly records the altercation. He says the woman ‘wants to smell my socks’. 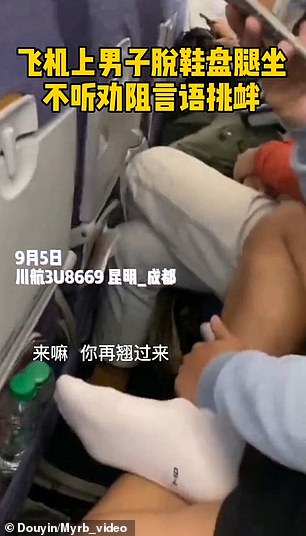 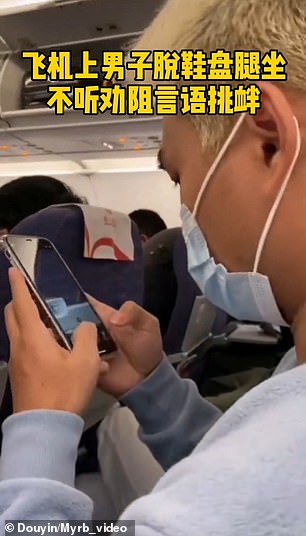 The footage then shows him thrusting his right foot into the woman’s face while saying ‘here you go, smell’.

The clip cuts off when the man tries to call a flight attendant as the woman continues criticising him.

Hundreds of thousands of people have left comments to condemn the male passenger. The video has attracted more than one million ‘likes’ on Douyin, the Chinese version of Tik-Tok.

One person wrote: ‘Lucky that he hadn’t met me. Otherwise, I would teach him how to be a man.’

Another viewer denounced: ‘This kind of people deserves to be beaten.’ 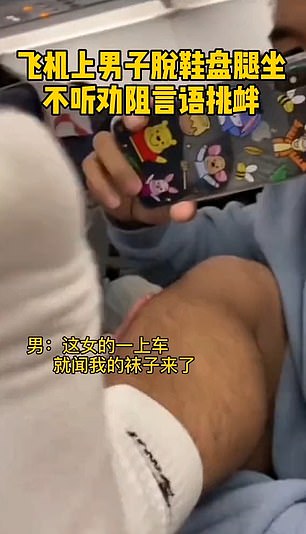 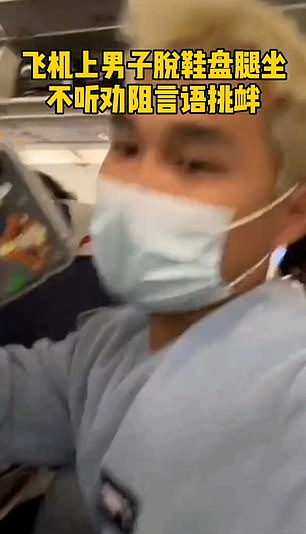 Hundreds of thousands of people have left comments to condemn the male passenger. The video has attracted more than one million ‘likes’ on Douyin, the Chinese version of Tik-Tok

According to a follow-up report by Mianyang Daily, the man has apologised to the woman and expressed his regret at his behaviour.

He said he had recognised his mistake and asked the woman to forgive him, according to the news outlet.

The Chinese government has grown concerned about the negative impact on the nation’s image stemming from numerous incidents of bad behaviour by Chinese tourists at home and abroad, ranging from fighting with aircrews to defacing cultural artefacts.

In 2016, China released a definitive list of acts that blacklist tourists and ban people from travelling as part of the ‘uncivilised behaviour law’.

Some of the regulations included interference with public transport facilities including planes, buses and boat; damaging public facilities and public environment, and offending local customs or way of life.