BRITAIN'S official coronavirus R rate has crept up again this week and could be as high as 1 in one of the UK's hotspot areas.

The R rate – which represents the number of people an infected person will pass Covid onto – is between 0.7 and 0.9 across the UK, Sage said today.

This is slightly up from last weeks estimate which was between 0.6 and 0.9.

Data also published by the Office for National Statistics (ONS) today revealed that infection rates are now the lowest levels seen since October.

However it states that infections are rising in the North East and Yorkshire, with Sage also stating that this area has the highest R rate in the country, of 0.7 to 1.

The experts found that between February 21 and 27 around one in 220 people in private households had Covid-19.

Data from Public Health England (PHE) published this week also stated that cases are dropping in every region in the country. 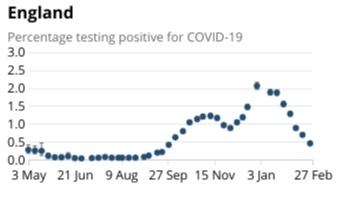 When the R is below 1, it means transmission is low enough for the epidemic to shrink – but greater than 1, it suggests the outbreak is growing.

The values are shown as a range, which means the true R rate most likely lies somewhere between the upper and lower estimates.

Sage also estimates the growth rate, which reflects how quickly the number of infections are changing, is now between -3 per cent and -5 per cent.

It means that the number of new infections is shrinking by between three per cent and five per cent every day.

Sage states that R is a lagging indicator and that the estimates "cannot account for the most recent policy changes, nor changes in transmission that have not yet been reflected in epidemiological data".

Data from the ONS shows that while infections have decreased in most areas, they are still rising in the North East, the East Midlands and East of England . 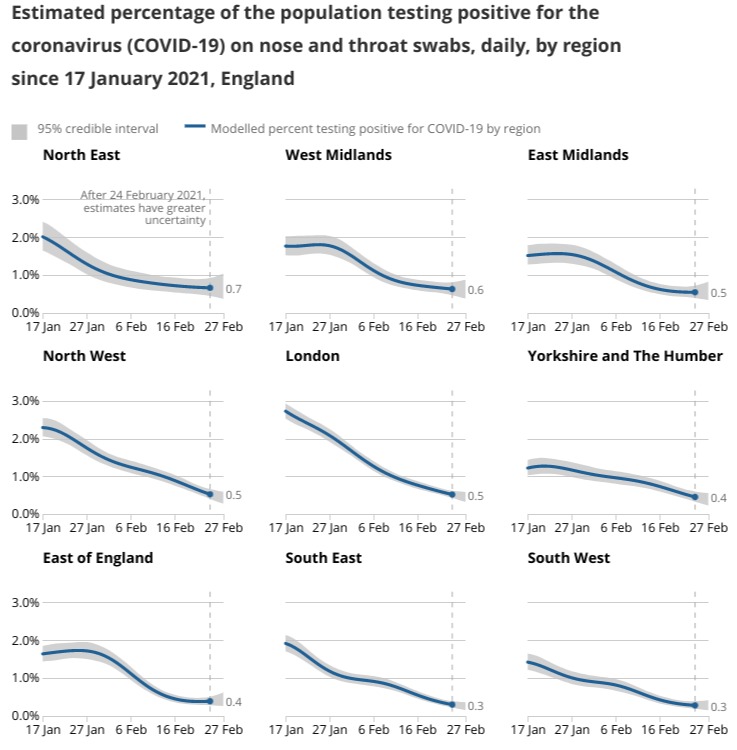 This echoes data that was published by Sage today which states that the North East and Yorkshire has the highest R rate in the country – between 0.7 and 1.

They did however state that caution was needed when interpreting any movement in the figures.

After the North East and Yorkshire, the Midlands and the North West have the second highest R rate in the country and sits between 0.7 and 0.9.

Every other English region sits between 0.6 and 0.8.

Sage said: "Prevalence of the virus remains high, so it remains vital that everyone continues to stay at home in order to keep the R value down, protect the NHS and help save lives.

"These estimates are based on the latest data, available up to 1 March, including hospitalisations and deaths, as well as symptomatic testing and prevalence studies.

"These estimates represent the transmission of COVID-19 over the past few weeks."

Looking at infections across different age groups and the ONS said that between February 21 and 27, the percentage of people testing positive in England has decreased in all age groups except School Year 7 to School Year 11 where trends remain uncertain.

What does R rate mean?

R0, or R nought, refers to the average number of people that one infected person can expect to pass the coronavirus on to.

Scientists use it to predict how far and how fast a disease will spread – and the number can also inform policy decisions about how to contain an outbreak.

For example, if a virus has an R0 of three, it means that every sick person will pass the disease on to three other people if no containment measures are introduced.

It's also worth pointing out that the R0 is a measure of how infectious a disease is, but not how deadly

The update on the R rate and the figures fro the ONS come after it was yesterday revealed that Covid deaths have dropped by 26 per cent in just a week.

But along with the declining rate of daily deaths, the number of infections has dropped by 34 per cent in one week.