Storm Ciara and Storm Dennis wreaked havoc across the UK with torrential rain and fierce winds, plunging some areas under deep floodwater. Flood alerts remain in place, as do Met Office weather warnings for both wind and rain across this week and into the weekend.

Now there could be further disruption as weather maps show a churning mass of winds in the Atlantic to the west of the UK.

Maps from Ventusky and WXCHARTS show an area of winds in the North Atlantic heading towards the UK on Thursday night into Friday.

The black swirl of winds can be seen on the maps close to Nova Scotia, before tracking eastwards to the UK and Ireland.

This coincides with a Met Office warning for wind which is in place on Friday from 8am until 8pm the same day. 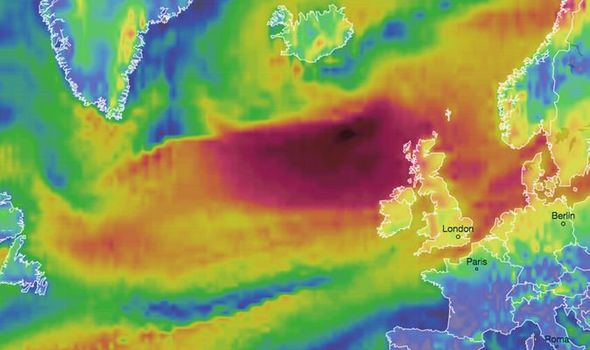 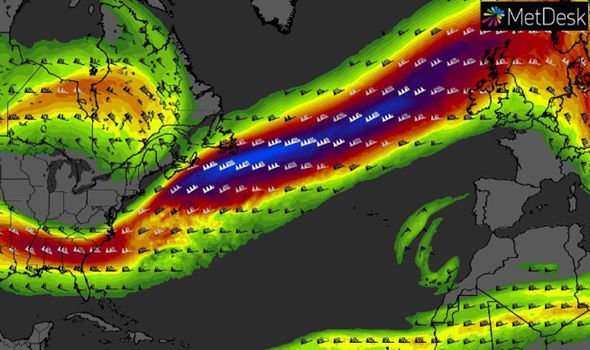 The Met Office warns: “Strong and gusty west to southwesterly winds are expected across northeast England and parts of southeast Scotland during Friday with gusts of 55 to 65mph in places.”

Over the past two weeks, rain and wind have caused upheaval, with rising floodwaters and damage across the country.

When Storm Ciara hit two weekends ago it brought 97mph winds to The Needles in the Isle of Wight, and 93mph in the fishing village of Aberdaron in Wales.

Then a week later, Storm Dennis brought strong winds and torrential rain to the UK with more than a months worth of rain falling in some areas. 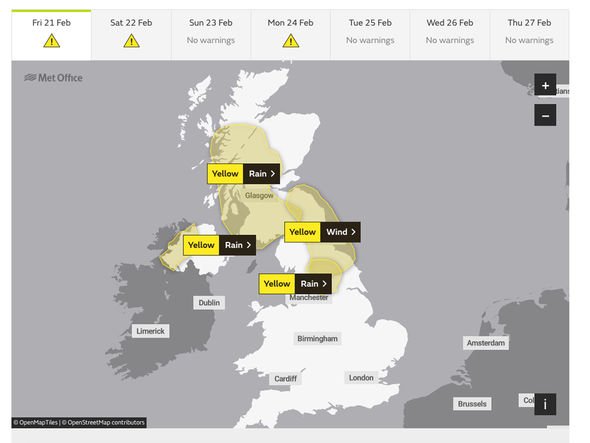 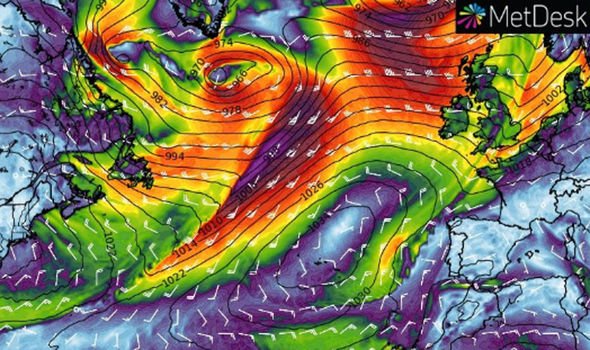 The Met Office recorded a total of 6.14 inches (156.2mm) of rain at Cray Reservoir in Powys in the 48 hours from Friday to Sunday morning.

According to the Met Office, the average monthly rainfall for February in Wales is 4.37 inches (111.1mm).

“Although the forecast for the next few days indicates that conditions won’t be as severe, any additional rainfall could create further challenges as river catchments are more likely to respond to extra rainfall more quickly.

DON’T MISS
UK floods: What to do if YOUR home was damaged – latest advice [INSIGHT]
Met Office weather forecast: Will another storm hit this weekend? [FORECAST]
UK snow forecast: Britain to be COVERED in snow – latest snow charts [MAPS]

Hail and thunder are also likely according to the Met Office, alongside hill snow in the northern areas of Britain.

The outlook for the rest of this week remains unsettled, with severe weather warnings in place across Thursday, Friday, Saturday and Sunday. 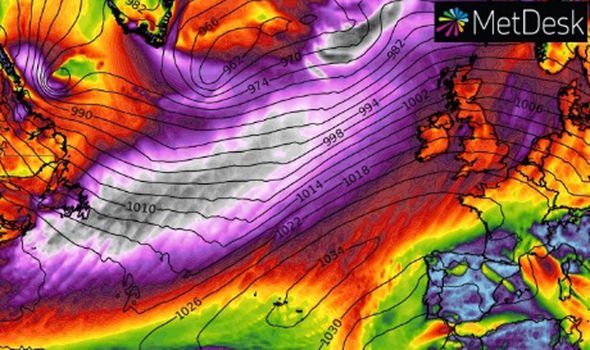 Wintry showers in the far north dying out, then dry and bright for a time, before cloud thickens bringing outbreaks of rain and strong winds.

Rain becoming heavy and persistent over hills of Wales and north-west England later.

South-eastern areas will be cloudy with some rain or drizzle, but a band of heavier rain across northwestern areas will move slowly south-east into central parts followed by colder, showery conditions.

A band of heavy rain and squally winds will move south-eastwards followed by colder conditions with sunny spells and showers, these heavy in places with hail and falling as snow over hills.

Outlook for Friday to Sunday

Windy, with cloud and rain spreading southeast Friday, lying across southern and central areas over the weekend, mild.

Some hill snow in the north. Sunny spells and wintry showers across Scotland.