Cold Arctic air currently being pushed into Scandinavia and Russia from the polar vortex is forecast to make its way towards the UK over the coming days. Scotland is also bracing for heavy snow over a 16 day period from today until Friday, January 29, according to WXXCHARTS’s snow depth models. Central areas are likely to be hit the hardest, with 22 inches (57cm) forecast on Thursday, January 28.

The north east could be struck with 6 inches (16cm) tomorrow.

Temperatures are expected to plunge to bitter lows of -12C on Friday, January 29 at 6am in Scotland.

The country is likely to stay at sub-zero levels throughout the rest of January, while regions in England, such as London and Manchester, average 0C. 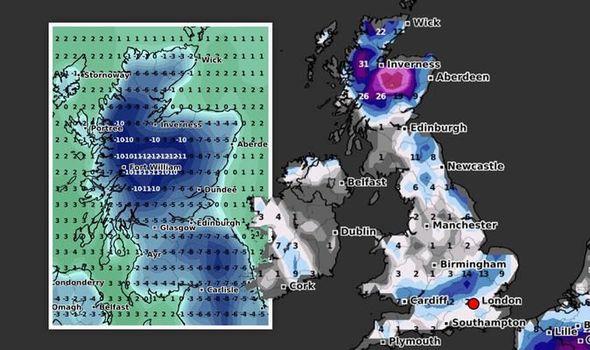 Gavin Partridge, owner of GavsWeatherVids, said heavy snow is expected to hit northern areas of the UK from today.

He said: “Thursday begins with heavy rain and snow through central, northern and eastern Britain.

“Most of the snow is across northern England and Scotland while the Midlands, southern and south eastern England have got rain. The west is drier and milder. 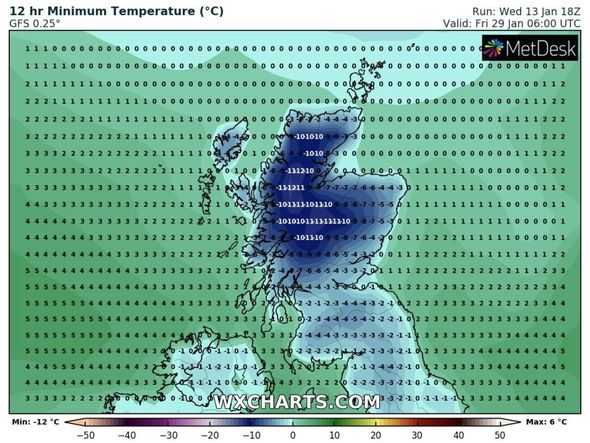 “Through the rest of the day we’ll see the rain turning increasingly to sleet and snow into the Midlands, East Anglia and possibly high ground in the south east.

“North east England can expect disruption with 10-20CM of snow possible over high ground. Western parts of the country will be drier and with just a few showers.

“Tomorrow will be mainly dry with sunny spells. Late in the day cloud and rain will push back into western Scotland and Northern Ireland.

“A very cold day across northern Britain where temperatures stay at or below freezing all day again. Even western areas will be colder tomorrow.” 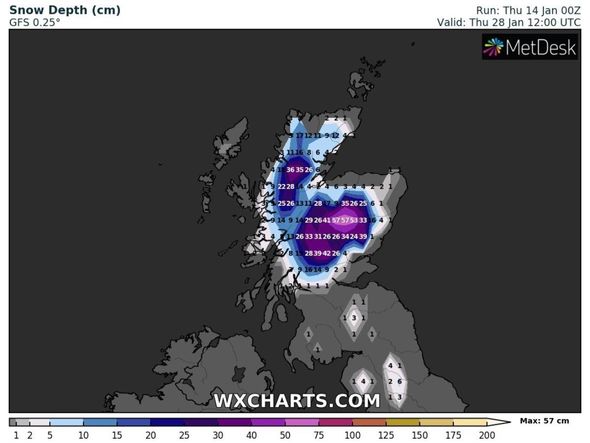 The BBC’s long-range forecast added the cold air is being pushed to the UK from the Arctic, with the end of the month expected to see more snow outbreaks.

The forecast said: “Through mid-January the weather will turn unsettled and begin to become rather changeable, with some highly variable temperatures expected for the next few weeks.

“This is due to the colder Arctic air being displaced into Scandinavia and Russia from the polar vortex.

“This air will occasionally feed into the UK, bringing some colder than normal days mixed with days of milder sub-tropical air pushing in from the southwest. 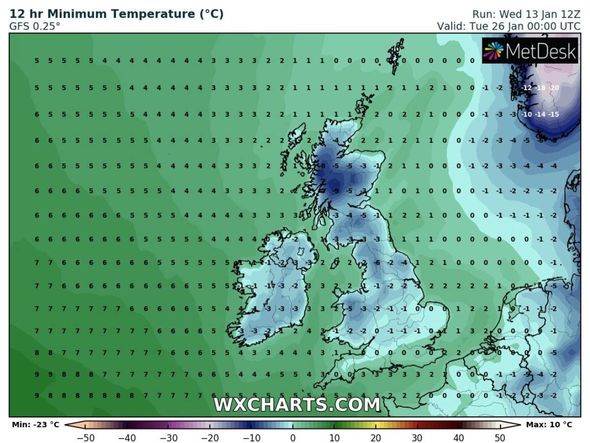 “As we head later into January and early February, there is a growing risk that the cold outbreak will become more widespread and longer-lived.”

Nick Finnis at Netweather warned a new cold front will bring fresh snow at the weekend.

He said: “Rain and snow will fizzle out this evening, then Friday is looking mostly dry and fine but cold as high pressure builds in.

“Saturday will see another frontal system move in bringing rain proceeded by snow. 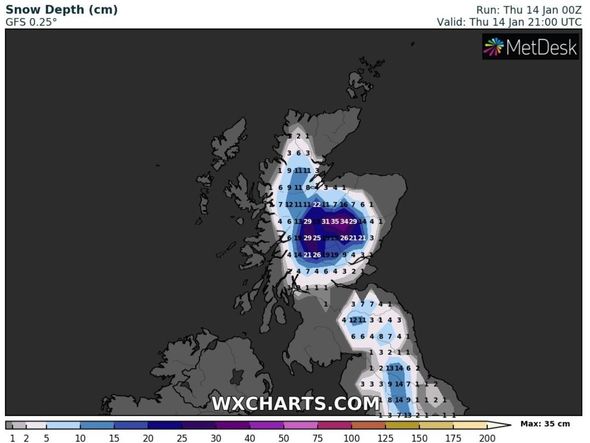 “Sunday drier in the south, as brief ridge of high pressure returns, rain for the north. Then turning increasingly unsettled and milder early next week, as Atlantic lows move in.”

The Met Office also issued a yellow warning for snow and ice for today and Saturday for most of Scotland and northern England.

The warning said: “Snow, already falling across parts of Scotland, will produce a further few centimetres before becoming lighter and less widespread during the afternoon.

“Across northern England, a further 2-5 cm snow is likely in places, with perhaps 5-10 cm above 200 metres across the Pennines and Peak District. 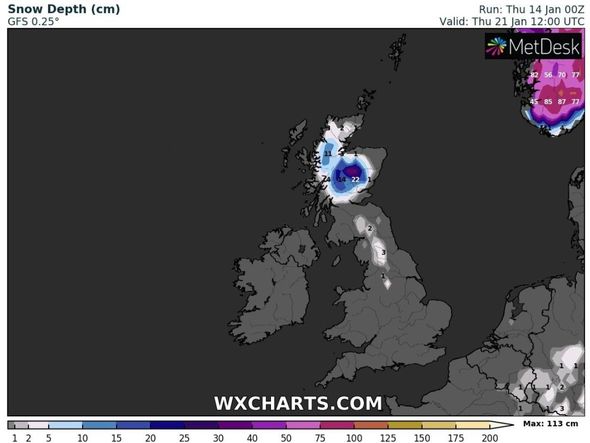 “Amounts of settling snow at low levels are less certain here, but 1-3 cm is likely in some places, with up to 5 cm above 200 metres.

“Sleet and snow will slowly die out on Thursday evening with ice forming on untreated surfaces.”