Britain has seen temperatures rise to the mid-teens this week as settled conditions moved in allowing the mercury to soar. But the mild weather isn’t set to last, with forecasters expecting another 48-hours of snow to strike much of the UK next month, with the mercury expected to plunge well below freezing.

Weather charts begin to forecast snow from the evening of Thursday March 4, as the whole of the UK turns blue and white to indicate a moderate chance of snowfall.

The map, by WXCharts, shows Scotland and the north of England have a higher chance of snowfall, up to 30 percent, while southern parts have up to a 20 percent risk of wintry showers.

The chance of snow intensifies through the weekend, with up to a 50 percent probability of snow falling in northern parts.

Forecasters expect the snow risk to continue through Monday, with the weather map still show the whole of the UK covered in blue and purple colourings – indicating the probability of snow. 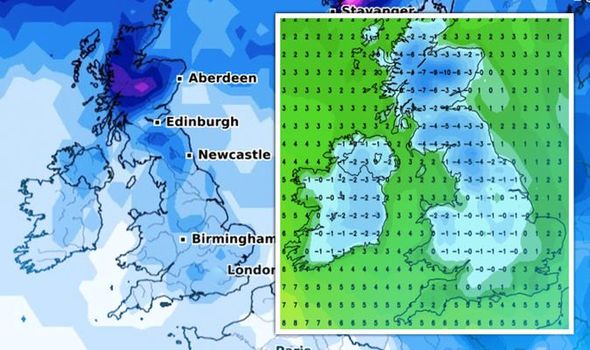 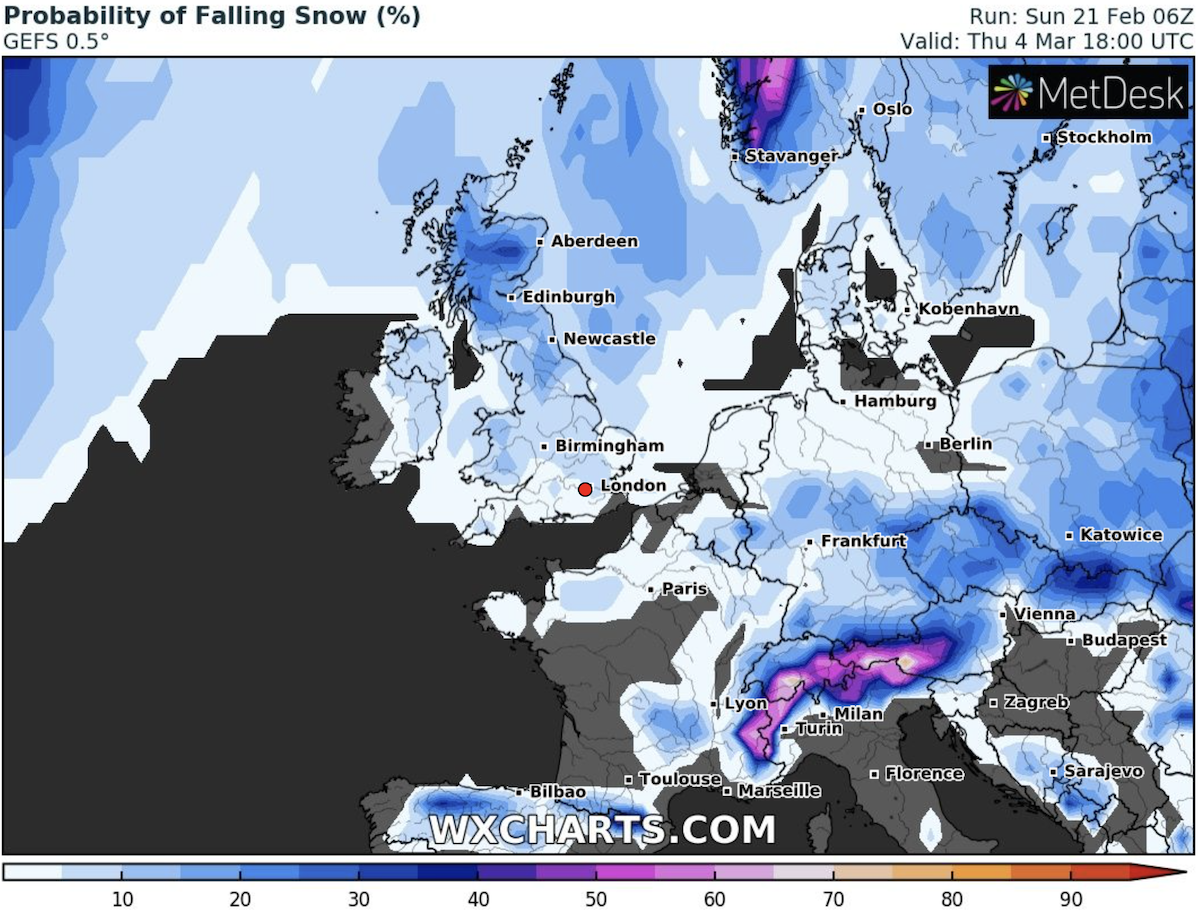 Maps by Netweather also forecast snow for the first weekend in March.

Their snow risk chart shows snow is forecast in the Scottish highlands from the early hours of Thursday morning before moving further south on Saturday.

The map shows the widespread snow is forecast over the weekend and is set to last 48hours.

At 6pm on Saturday March 6 Scotland is covered with a 100 percent snow risk, while parts of northern England are covered by a more moderate risk of between 50-85 percent.

Overnight the snow risk moves further south still and by 12pm on Sunday parts of the Midlands, Wales and the south of England turn red, indicating a high chance of snow. 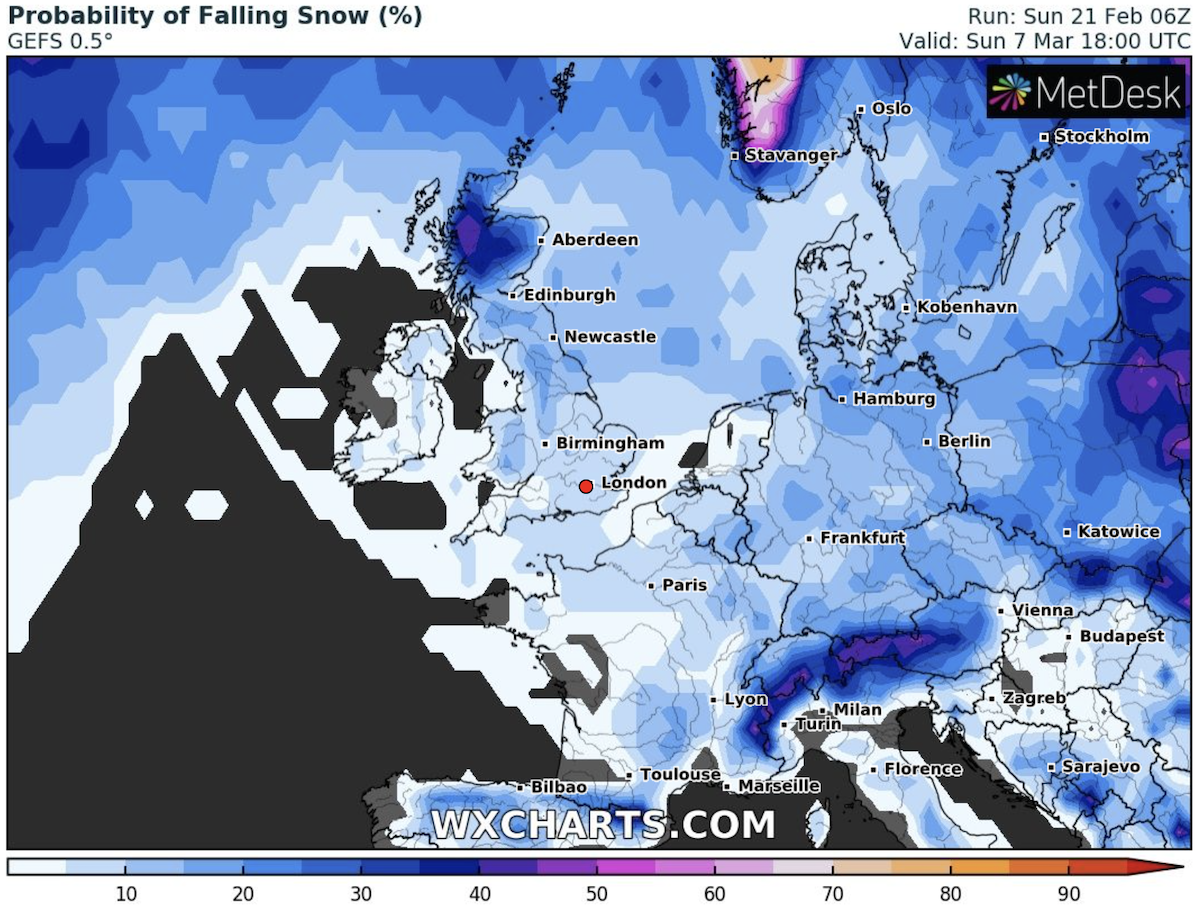 By 3pm parts of the east of England is covered by an 85 percent snow risk, including the capital and parts of Kent and Sussex.

As 6pm hits the snow risk intensifies further, with up to a 100 percent chance of snow covering East Anglia and the south east.

Scotland continues to be covered by a 100 percent snow risk.

The snow risk no longer covers any part of the UK by Monday morning.

The wintry conditions look set to coincide with a marked drop in temperatures. 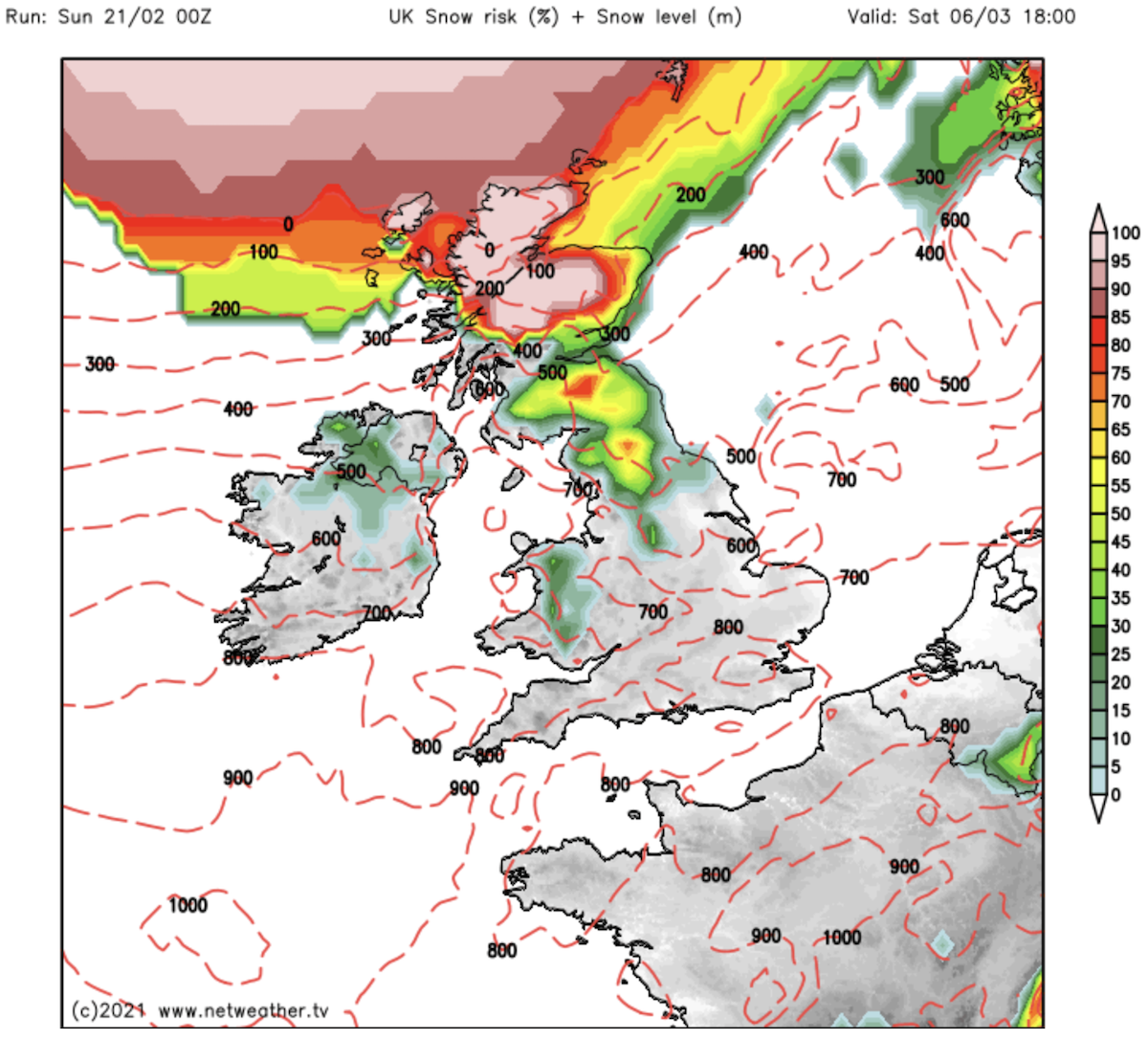 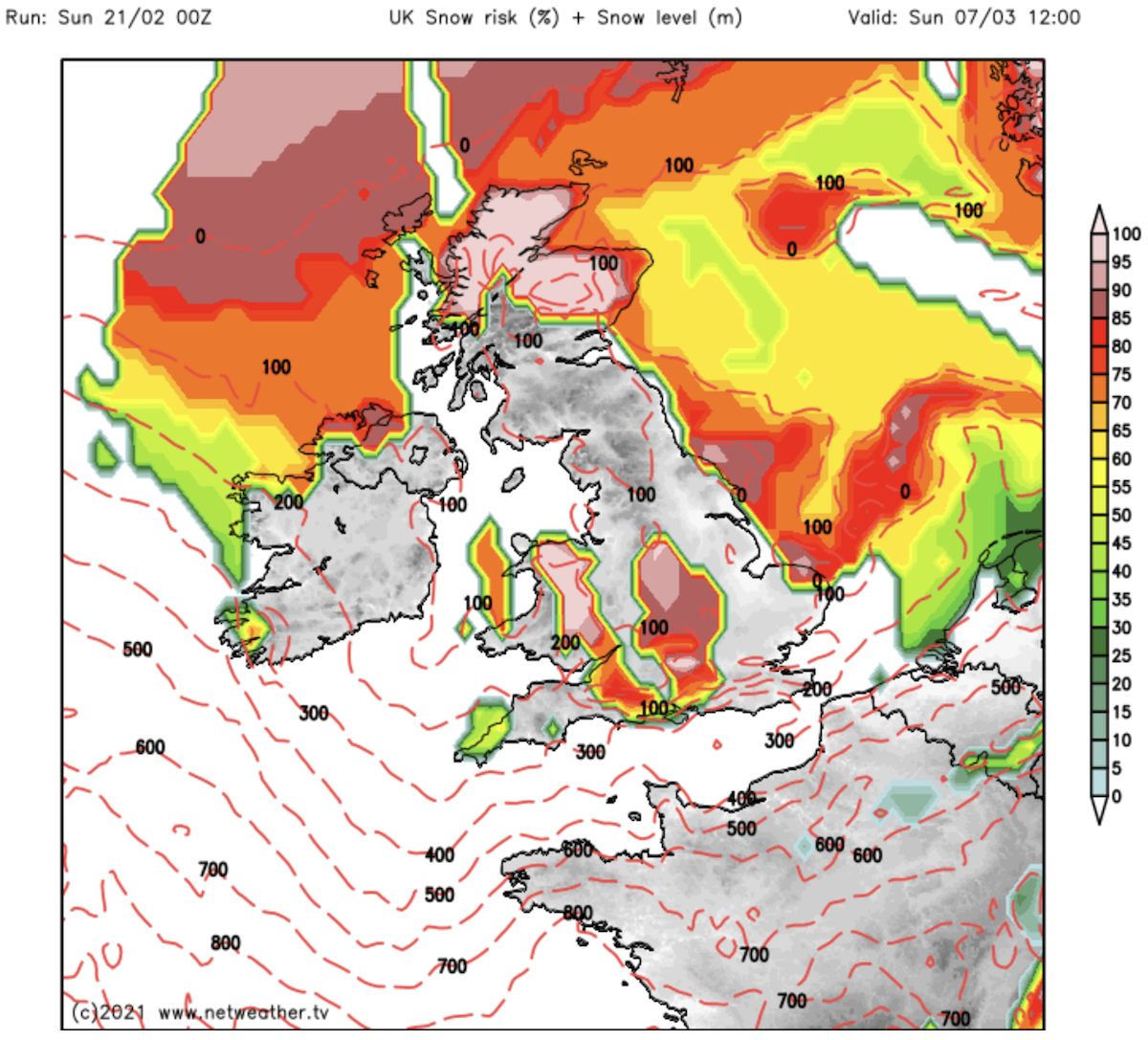 Netweather charts show the mercury will start to fall from Saturday March 6, with lows of -5C forecast at 9pm in Scotland.

Other parts of the UK will remain warmer, with temperatures ranging from 2-7C.

But overnight the mercury looks set to plunge further, with -10C forecast in Scotland from 9am.

The chart, valid for 12noon on Sunday, shows much of the UK turn icy blue, with Scotland and the north of England seeing the worst of the cold weather.

Wales and parts of England could drop to lows of -2C, while the south east and west is expected to see the mercury rise just above freezing. 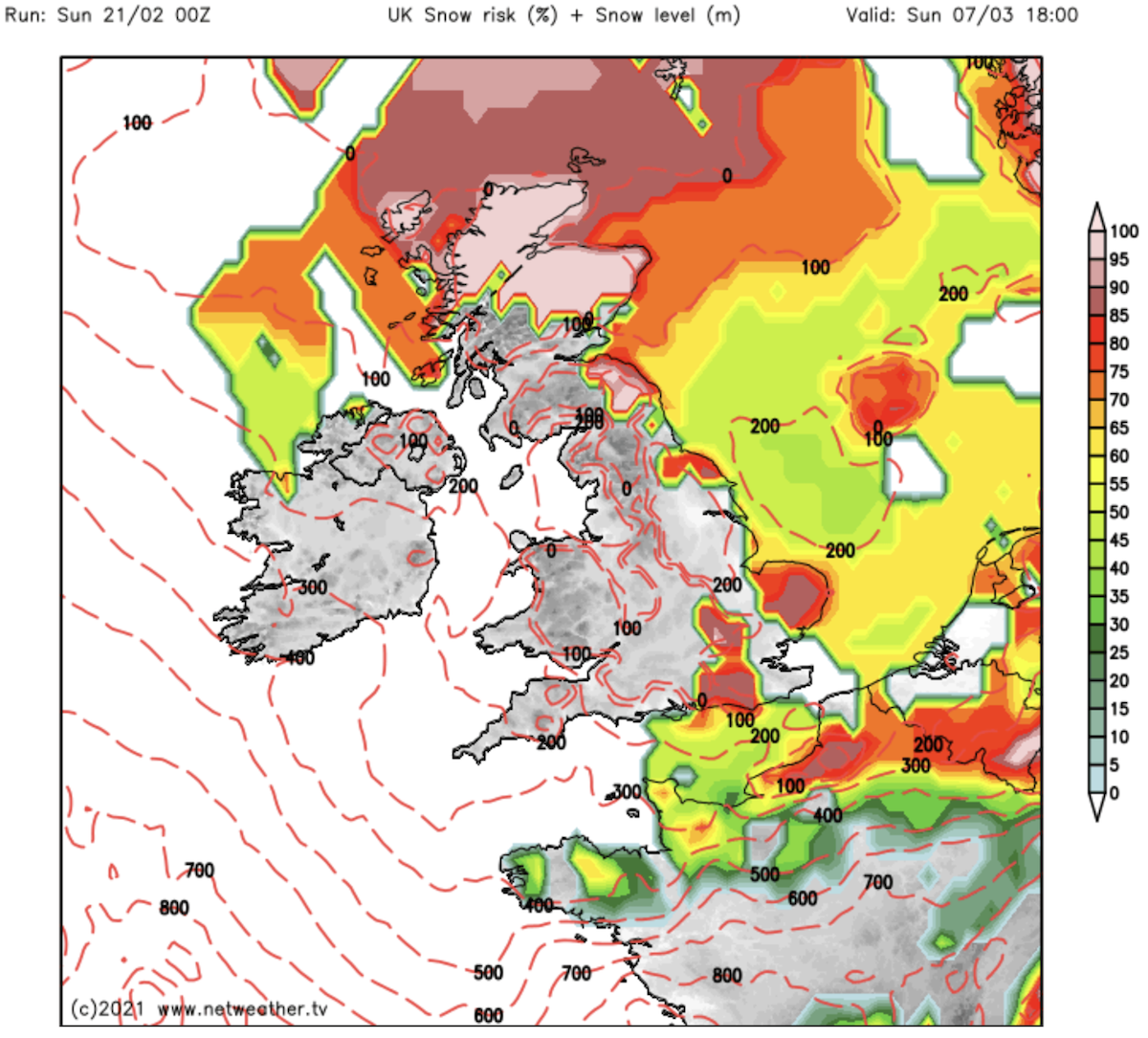 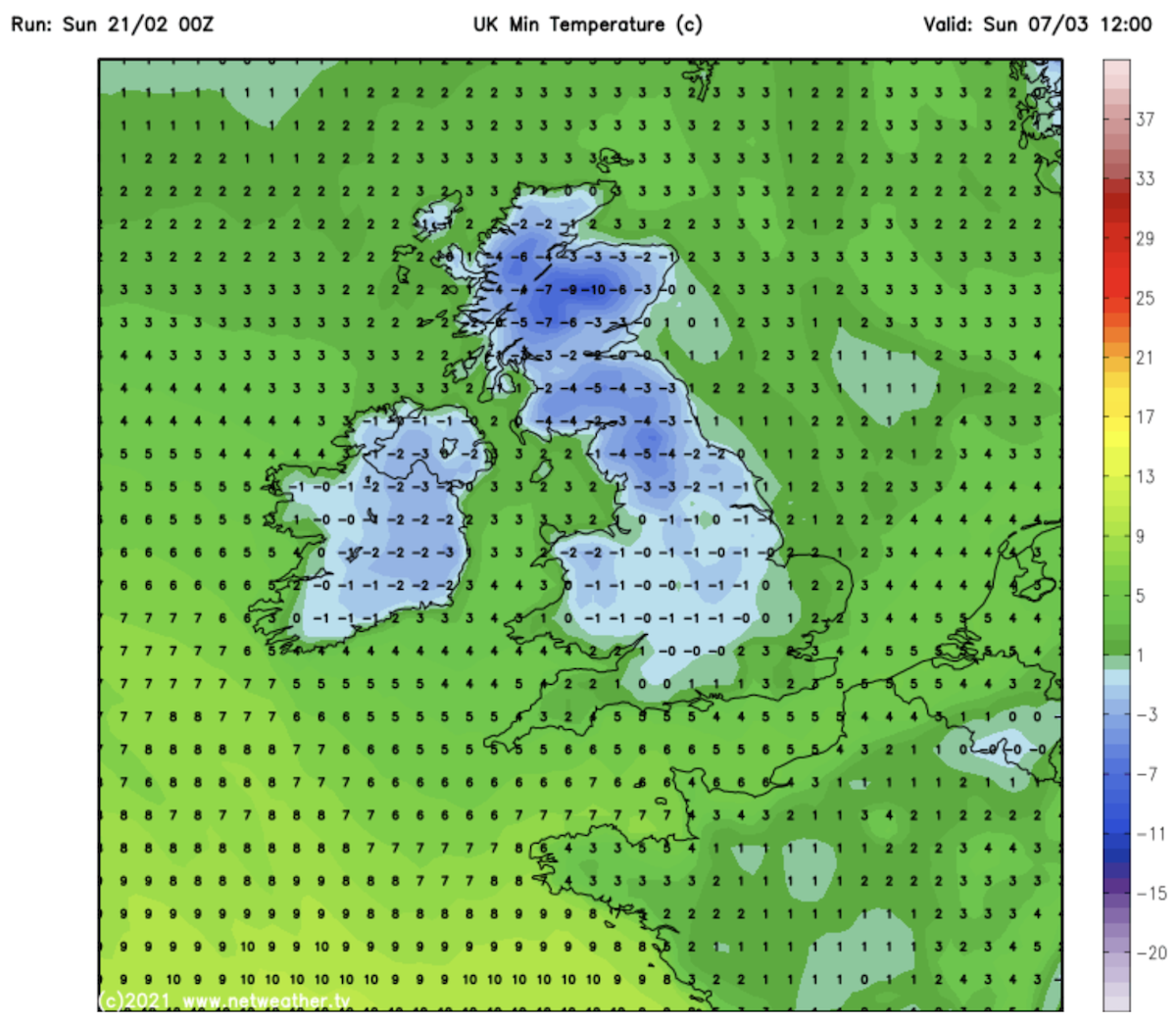 BBC forecasters warn a “sharp cold” spell looks set to develop towards the end of the first week in March.

They also state unsettled conditions look set to characterise the start of the month.

Netweather forecasters state snow is possible in the first week of the month.

They state: “Turning increasingly unsettled, breezy and feeling cold in the wind.

“Some rain or showers before probably turning much colder from the North with snow possible especially over hills in the North and East.”