When cities try to figure out the amount of greenhouse gases they emit, they tend to undercount — and not just by a little.

The average error is nearly 20 percent, according to a study published Tuesday in the journal Nature Communications. The researchers suggested that if that error was consistent across all American cities, the resulting annual missed emissions would be nearly one-quarter higher than those of the entire state of California.

Nearly three-quarters of the carbon dioxide generated from fossil fuels comes from cities, the researchers said, and urban areas will continue to boom in coming years. Many cities around the world have set ambitious goals to lessen their burden to the planet, but there is not yet a consistent way for them to measure the amount of carbon dioxide or to gauge any reductions. The new research shows that voluntary efforts by cities to measure those emissions are inconsistent and flawed.

Since hundreds of cities across the United States have pledged to greatly reduce their greenhouse gas emissions, accurate measurement is an essential element of knowing where they stand and whether they are making progress toward meeting their goals.

“We haven’t had a systematic regulatory approach to controlling greenhouse gas emissions in the U.S.,” said Kevin R. Gurney, the lead author of the paper and a professor at Northern Arizona University’s School of Informatics, Computing and Cyber Systems. “A crucial step toward any sort of policy has to be, ‘What are our emissions, where are they, how much are they and what’s making them happen?”

With the new Biden administration rejoining the Paris climate agreement and making climate action a priority, he said, finding ways to effectively reduce emissions will be critical. And while national standards and targets will be set, much of the actual reduction will occur on a local scale.

The new study looked at the self-reported carbon dioxide inventories from 48 cities as part of what the researchers call the Vulcan project; they compared the cities’ own emissions reports with estimates derived mainly from publicly available federal data on such sources as factories and power plants, census areas and traffic and road information. The team found that cities underreported their emissions by 18.3 percent on average. 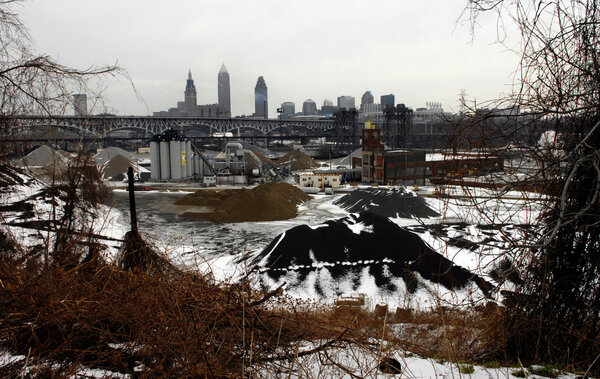 Dr. Gurney said that the errors seemed to be simple miscalculations. “I don’t think there’s any attempt to systematically or intentionally underestimate emissions,” he said. Although some cities correctly estimated their emissions, he noted, though “whether that’s right for the right reasons or right for the wrong reasons, it’s difficult to know.”

Dr. Gurney’s work receives funding from the National Institute of Standards and Technology, and one of the authors, Kimberly Mueller, is a scientist there. James R. Whetstone, an official in the institute’s greenhouse gas measurement program, called the new paper “an important step forward” in properly measuring greenhouse gases from cities. “What will serve the nation best is if we have a consistent way to state emissions that goes from the city level to the national level,” he said.

The National Institute of Standards and Technology, he noted, focuses much of its efforts on atmospheric monitoring, and so Dr. Gurney’s method can help “to measure the same thing in different ways,” and thus gain confidence in the results.

Earlier studies by researchers at the University of Michigan, Harvard and the federal government found that emissions of methane, another powerful greenhouse gas, were also undercounted by many cities. Dr. Gurney said that “both gasses should really be part of this systematic approach.”

The cities’ efforts so far, Dr. Gurney said, have been a laudable endeavor, but “they haven’t had a lot of tools to do it.” What’s more, he said, “Cities are struggling to pick up the garbage and fill potholes, much less keep detailed reports about their emissions.”

Reducing emissions in a city, he said, requires a deep understanding of where the biggest problems are, including specific traffic-choked highways and industries, so that the authorities can take focused actions that provide the greatest benefit at the lowest cost. Putting in high-occupancy vehicle lanes or rapid bus lanes on every highway could be wasteful; it would be better, he said, to know which road projects could do the most good.

The paper concluded that with scientists providing the measurement know-how, urban officials “can devote time and resource to the activity they have the greatest knowledge and political influence over: the best mitigation strategies.”

Patrick Drupp, the associate director of legislative and administrative advocacy at the Sierra Club, which encourages cities to pledge to make a transition to renewable energy, said the new research showed a path for environmental action. “As we work to tackle the climate crisis and protect all communities from harm,” he said, “it’s clear that accurate data is essential to making effective decisions.”