‘We need to get the economy going’: Liz Truss doubles down on tax cut pledge amid deepening gloom over the cost-of-living with energy bills forecast to hit £4,266 a year as she and Rishi Sunak face their first Red Wall grilling

Liz Truss doubled down on her determination to cut taxes to rescue the economy today as she brushed off claims the policy is ‘electoral suicide’.

Facing northern Tories at a hustings in Darlington tonight she said cancelling a planned increase in Corporation Tax was needed to  stimulate growth.

She has has refused to commit to extra support for families struggling with the cost of living after analysts delivered a shock warning that energy bills could top £4,200 in the new year.

The two remaining contenders in the Tory leadership race faced renewed calls to spell out how they would help after Cornwall Insight forecast average bills could hit about £3,582 in October, from £1,971 today, before rising further in January.

Mr Sunak pledged that he would be prepared to sit down with his rival and incumbent PM Boris Johnson to discuss the issue before one of them replaces him.

But he questioned the value of the move – demanded by figures including Gordon Brown, while he and Ms Truss disagree on the medicine needed.

It came as the leadership election row over how to ease the coming crisis for millions of families continued to be fought bitterly.

Deputy Prime Minister Dominic Raab, who is supporting Rishi Sunak, sparked fury in the opposition camp as he levelled the claim at his opponent, the current favorite to enter No10.

He said her strategy for dealing with inflation and the cost of living crunch – through tax cuts as soon as she takes power – risked casting the Tories into the ‘impotent oblivion of opposition’.

It came after a poll yesterday suggested the public were more interested in action to control rampant inflation, with fewer than 20 per cent wanting tax cuts. 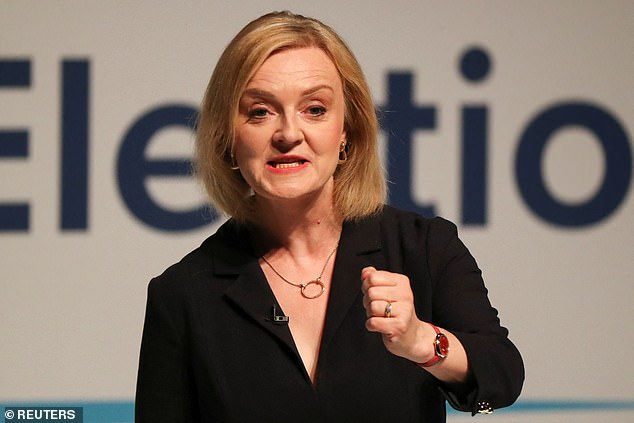 Facing northern Tories at a hustings in Darlington tonight she said cancelling a planned increase in Corporation Tax was needed to stimulate growth. 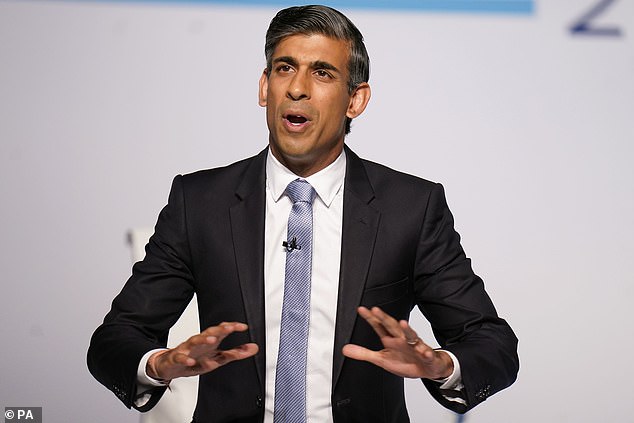 The two remaining contenders in the Tory leadership race faced renewed calls to spell out how they would help after Cornwall Insight forecast average bills could hit about £3,582 in October, from £1,971 today, before rising further in January. 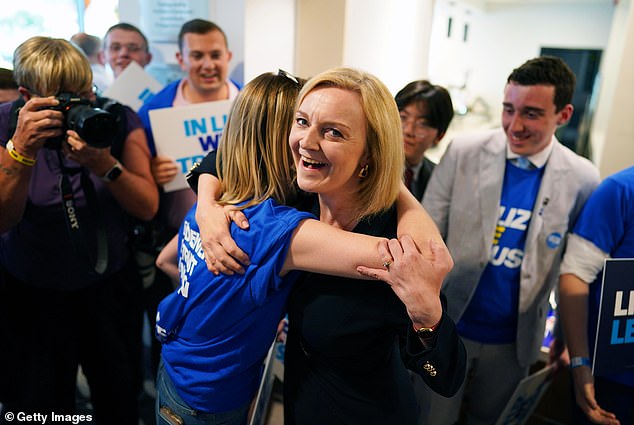 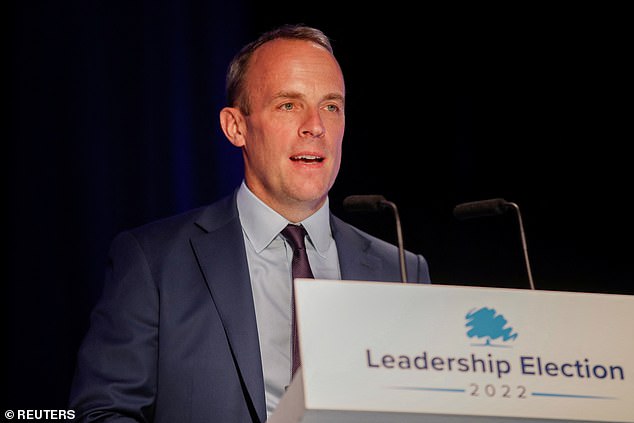 But Ms Truss’s campaign hit back, saying Mr Sunak appeared to be running on a ‘Labour economic ticket’ that would lead Britain into a recession.

A campaign source said: ‘The suicide note here is Rishi’s high taxes and his failed economic policy that he’s peddled for the past two-and-a-half years when he was chancellor.

She was also boosted today by the backing of Aaron Bell, a backbench Tory who was one of the loudest critics of Boris Johnson.

The two leadership candidates face their first leadership hustings in the Red Wall of ex-Labour seats in the North and Midlands tonight, in Darlington.

Last week the Bank of England warned of a five-quarter recession starting later this year, with inflation potentially hitting 13 per cent. At the same time energy bills are expected to spike in october when a new higher price cap comes into effect.

A new analysis by Cornwall Insight today suggested that given current prices the cap on bills could hit £4,266 a year in January, £650 above its previous prediction.

But Sunak supporter Mark Harper today suggested no help for hard-pressed families would be considered – if at all – before the new Tory leader takes office next month.

Boris Johnson has already refused to intervene before he leaves No10 despite pleas from figures including Gordon Brown to hold emergency talks with both candidates. 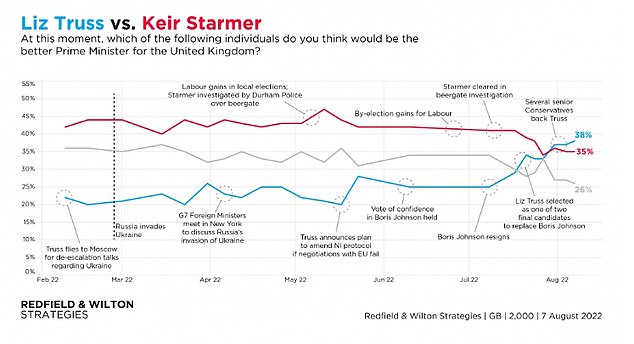 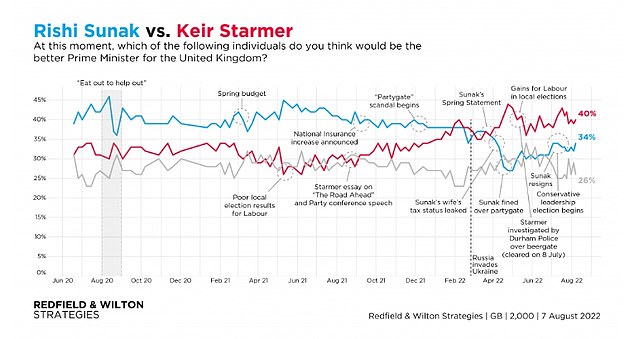 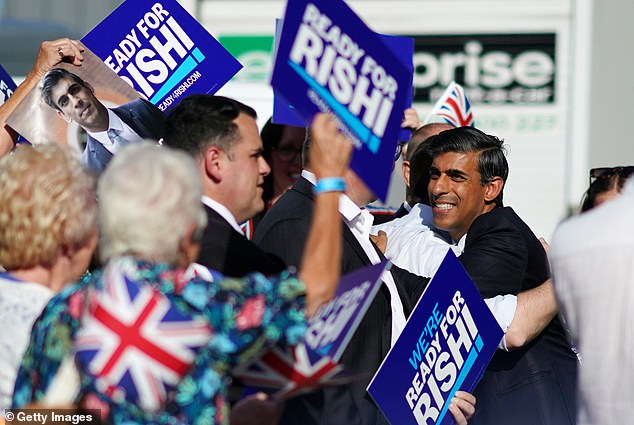 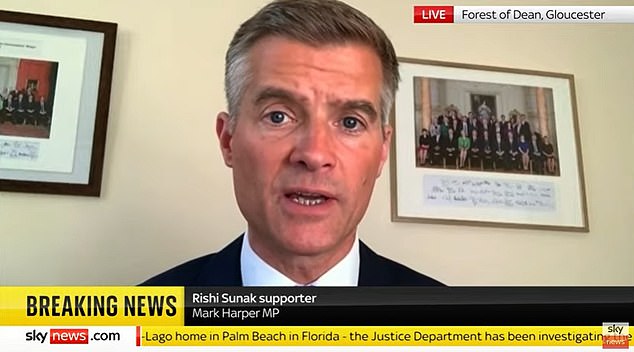 Sunak supporter Mark Harper today suggested no help for hard-pressed families would be considered – if at all – before the new Tory leader takes office next month and backed Mr Raab’s ‘suicide note’ jibe. 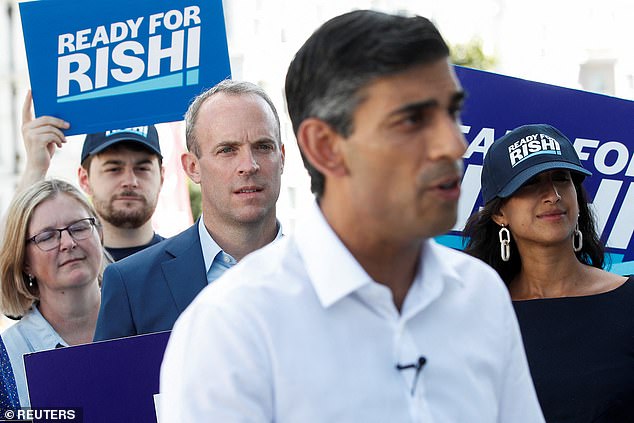 Liz Truss has been warned that the country’s poorest need more help to deal with the cost-of-living crisis by one of her most high-profile supporters.

Ex-chancellor Sajid Javid went public with a sift rebuke to the Foreign Secretary over comments she made to the Financial Times last week.

She suggested there would be no ‘handouts’ for families amid spiralling bills and prices on the high street, but she would go ahead with tax cuts.

Mr Javid told the i that she had the best economic plan for long-term improvements to livign standards,

But he added: ‘All serious politicians recognise that although lots has been done already, more needs to be done. There is just no way to mitigate the impact on everyone in every single way.’

He told Times Radio: ‘First of all, he’s made it clear that if he’s elected as leader of the party and prime minister there will be more help and I think that will give a lot of people, particularly those who are the most vulnerable, a lot of peace of mind, which compared to his opponent (Liz Truss) in this contest, who’s ruled out more handouts and only going to be delivering help through tax cuts that isn’t going to help pensioners or the most vulnerable … I think people can have a lot of confidence if they look at his (Mr Sunak’s) track record.’

He added: ‘He’s been clear all the way through that he would look at the situation to see what was required to help people … Targeted, limited support for a period has much less of an impact than permanent, large, unfunded tax cuts that are funded by borrowing.

‘Rishi’s also made it clear that, if we need to, we’ll look at delivering some savings from the existing enormous Government budgets to look at funding some of this.

‘I think there’s a very big difference between large, permanent unfunded tax cuts that go to the wealthiest in society, rather than targeted help, targeted at those that are struggling to pay their energy bills, and that’s what Rishi is setting out.’

But Communities Minister Paul Scully, who is supporting Liz Truss, said people must be ‘tearing their hair out’ at Tory in-fighting.

‘People looking from the outside must be tearing their hair out because all we want to do is do the best for the country, for people.

Senior No10 officials are willing to turn on Boris Johnson and admit he did mislead Parliament over what he new about Partygate lawbreaking.

Three members of staff who worked with the PM have indicated they could give evidence to a Parliamentary probe that his supporters claim is a ‘witch hunt’ against him.

A seven-strong group of MPs is investigating whether Mr Johnson deliberated or unintentionally misled the Commons over Covid lawbreaking rife in No10.

It is examining the background to how he came to tell MPs ‘no Covid rules were broken’ and ‘all guidance was followed in No 10’, when he himself was later among those fined by police.

Mr Johnson argues that he made the statements at the despatch box in good faith based on his belief at the time.

The Telegraph today reports that one staff member is willing to give evidence tot eh inquiry led by Labour grandee Harriet Harman, with two others considering it.

Allies of the Prime Minister have previously attacked the ‘kangaroo court’ probe by the Commons privileges committee.

‘But in terms of tax cuts, what Liz has said is the right thing to do – the first Conservative thing to do is don’t take the money from people in the first place, rather than just take money to give it back to them.’

He said that if he became prime minister, he would extend the package of support he announced earlier this year, which gave every household £400 off their energy bills, while those on means-tested benefits received a further £650.

‘People need proven methods that will deliver for them quickly. So I will use the framework I created to provide further support and give millions of people the peace of mind they desperately need ahead of the winter,’ the former chancellor said.

Mr Sunak said: ‘In order to keep any one-off borrowing to an absolute minimum I will first seek efficiency savings across Whitehall to provide direct support for families to help with the unprecedented situation we face.’ But a Truss campaign source said Mr Sunak had ‘changed his position on cost of living two or three times in the space of a few weeks’.

‘Three weeks ago he was saying more borrowing was irresponsible and inflationary.

‘Has he changed his mind? It’s a mammoth strategic U-turn.’

Miss Truss last night received a fresh boost as a poll suggested only she can beat Sir Keir Starmer. When asked who would be better as PM, the survey conducted by Redfield and Wilton found 38 per cent said Miss Truss, against 35 per cent for Sir Keir. Mr Sunak scored 34 per cent, compared to 40 per cent for the Labour leader.

It came as Downing Street rejected a call by former prime minister Gordon Brown for Boris Johnson to summon a meeting of the Cobra emergency committee to address the cost of living crunch.

The PM’s spokesman said Mr Johnson would speak to Chancellor Nadhim Zahawi to ensure that support measures due to come into effect later in the year were on track. But the spokesman said further measures would be a matter for the next prime minister.

How YOU can quiz leadership favourite

Daily Mail readers will get the chance to have their own questions put to Liz Truss in a television interview tomorrow.

The Tory leadership favourite will set out her vision for Britain in The People’s Forum on the TV channel GB News.

In the one-hour programme, hosted by Alastair Stewart and screened at 5pm, Miss Truss will take questions from a live audience in Leigh, Greater Manchester, as well as viewers at home.

Rishi Sunak is expected to be interviewed at a later date. Miss Truss said: ‘I am looking forward to talking to GB News viewers and our members in the heart of our Red Wall and taking their questions.’

GB News editorial director Mick Booker said: ‘The idea is to draw out the thinking of each candidate on the issues closest to our viewers’ and listeners’ hearts.’

You can watch GB News on Freeview channel 236, Sky channel 515, Virgin Media channel 626 and Freesat channel 216, or listen to it on DAB+ Radio.

Please state that you are a Daily Mail reader if you do submit a question.

READERS CAN SUBMIT QUESTIONS BY EMAIL TO: [email protected]