Home » World News » Trump’s U.K. visit: What you need to know, from royal ceremony to protests in London

LONDON – President Donald Trump arrived in the United Kingdom on Monday for several days of pomp and ceremony. Here’s your crib sheet.

Trump is in the United Kingdom for a three-day state visit. A state visit is one that formally comes at the invitation of the British monarch: Queen Elizabeth II. It means that there will be an emphasis on ritualized ceremony, including banquets at the queen’s lavish London pile Buckingham Palace, wreath-laying to honor Britain’s military dead, gun salutes fired from the Tower of London and other grand displays of decorum essentially showing through soft power how Britain can be the host with the most.

Still, while the queen sent the invitation and will feature prominently in the visit along with other members of the royal family, she did so at the request of the British government, meaning it won’t be all testimonial readings and charming musical performances. There will be serious talks on defense, investment, security and trade.

Why does it matter?

For a start, while the queen has hosted 152 state visits since becoming monarch in 1952, and met 11 of 12 sitting U.S. presidents over the last 67 years – her majesty’s royal path never crossed with Lyndon B. Johnson – only two U.S. presidents have made state visits to Britain: George W. Bush in 2003 and Barack Obama in 2011. Trump is being accorded a special honor when he arrives June 3.

However, the visit is important for reasons that go beyond ceremonial affairs. Political scientists say it’s about reaffirming the so-called special relationship between two of the world’s closest allies who have deep cultural, economic and political ties, but who haven’t always seen eye-to-eye since Trump came to power vowing to pursue a more unilateralist foreign policy. Areas of disagreement have included Trump’s Muslim travel ban, his talking down of the NATO military alliance and U.S. exits from the climate and Iran nuclear accords. There’s also difference of opinion about China, in particular what type of relationship to maintain with Chinese telecom giant Huawei. Washington thinks the company is a massive national security threat; London has a more relaxed view. 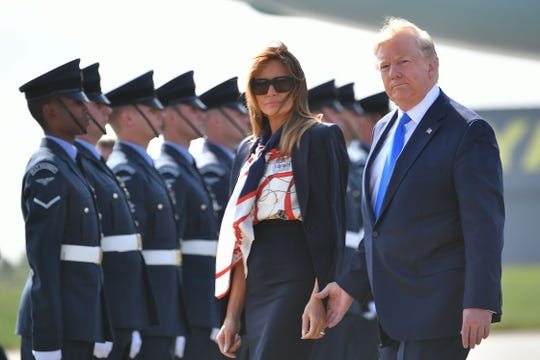 President Donald Trump and first lady Melania Trump walk to the Marine One helicopter after disembarking Air Force One at Stansted Airport, north of London on June 3, 2019, as they begin a three-day State Visit to the UK. (Photo: MANDEL NGAN, AFP/Getty Images)

The visit also comes as Britain is mired in a weeks-long process to pick a new prime minister after Theresa May said she would vacate the role on June 7 over her handling of Britain’s impending exit from the European Union, known as Brexit.

“If we get a new prime minister who the president can relate to then things might run more smoothly, especially if May’s successor allows us to crash out of the EU and comes begging for a trade deal with the USA,” said Tim Bale, a politics professor at Queen Mary, University of London, referring to the possibility of a “no-deal” Brexit.

Ahead of his arrival, Trump told British tabloid newspaper The Sun that he was backing U.S.-born politician Boris Johnson to be the next prime minister. He also said that his friend Nigel Farage should be involved in negotiations to leave the EU.

Aside from the normal retinue of senior advisers and administration officials, a large portion of the Trump family, according to the New York Times. The outlet has reported that along with First Lady Melania Trump, the president will fly over his children, including Donald Jr, 41; Ivanka, 37; Eric, 35; and Tiffany, 25. It is not yet known whether Trump’s youngest son Baron, 13, will also make the transatlantic trip. The White House would not comment on which members of Trump’s family would be accompanying him.

Still, if the Trump family does form part of the president’s entourage they would be expected to attend the banquet dinner at Buckingham Palace on Monday evening. On the British side, the dinner will be attended by outgoing Prime Minister May, Prince Charles and the Duchess of Cornwall and the Duke and Duchess of Cambridge. Prominent British public figures and Americans living in Britain will also be there. The queen and Trump are both expected to make speeches at the start of the banquet.

What will he be doing?

In addition to taking part in bilateral meetings with May, and the dinner banquet, there will be a private lunch with the queen; a visit to an exhibition showcasing items that Britain’s foreign office has called of “historical significance to the United States”; tea with Prince Charles and the Duchess of Cornwall; a chance to inspect Britain’s military Guard of Honor; a tour of Westminster Abbey (famous site of many coronations and royal weddings); and a breakfast meeting with senior American and British business leaders.

On Wednesday, Trump will participate in commemorations to mark the 75th anniversary of the D-Day landings. This event will take place in Portsmouth, on Britain’s south coast. It will include a fly-past with 25 modern and historical aircraft. Since Trump is known to like a good parade and military fanfare, Wednesday should be a good day for him.

“I hope President Trump appreciates the full sweep of history when he visits … Portsmouth … that European unity is very much an American project; that Europeans’ prosperity and security are interlinked with America’s … and that this is a project that needs America’s support,” said Heather Conley, an expert on foreign affairs at the Center for Strategic and International Studies, a Washington-based think tank.

What kind of reception can he expect?

Over half of Londoners are opposed to Trump’s visit to Britain’s capital,

according to a recent poll by research firm YouGov and Queen Mary, University of London. Although nationwide: 46% to 40% think the visit should go ahead.

When Trump visited London last year as part of an ordinary working visit an estimated 250,000 people protested on the streets of central London. Anti-Trump activists who oppose his divisive policies from immigration to abortion rights are planning for similar numbers this time. There will be smaller protests around the country.

And remember Trump baby? The phone-wielding, diaper-wearing inflatable that flew above London when Trump visited in July? The team behind it told USA TODAY that the giant orange blimp will again take to the skies, on Tuesday, in Parliament Square.

British media have reported that Trump’s three-day visit will cost British police and security services about $23 million to help keep him safe.

The indignity! The Trump baby blimp, gearing up for @realDonaldTrump’s visit to Britain next month, is in the black suitcase on the right. A smaller version of the official diapered prez, who has been to Argentina, France and Scotland, is in the other case @TrumpBabyUKpic.twitter.com/qXThKj2zY9 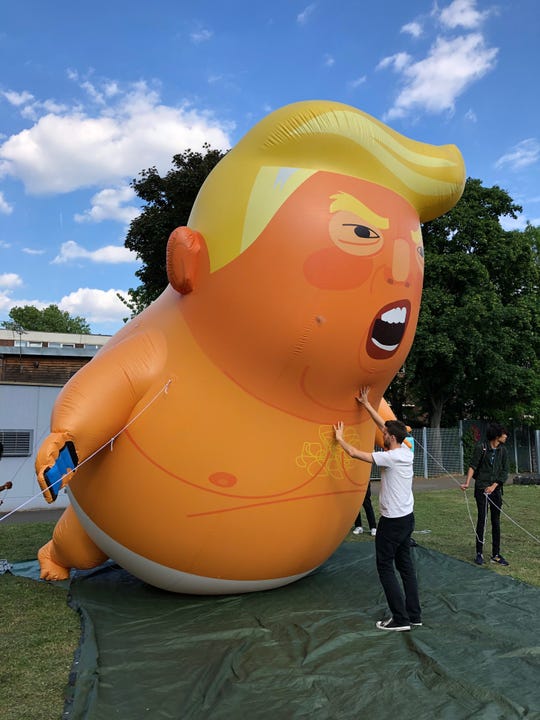 London Mayor Sadiq Khan, who Trump has clashed with before, was the subject of two disparaging tweets by the U.S. president on Monday. It came after Khan, London’s first Muslim mayor, wrote in an op-ed in British newspaper the Observer that it is “un-British to roll out the red carpet for Donald Trump.”

Trump tweeted that Khan was “a stone cold loser who should focus on crime in London, not me.”

“Kahn reminds me very much of our very dumb and incompetent Mayor of NYC, de Blasio, who has also done a terrible job – only half his height,” Trump added.

[email protected], who by all accounts has done a terrible job as Mayor of London, has been foolishly “nasty” to the visiting President of the United States, by far the most important ally of the United Kingdom. He is a stone cold loser who should focus on crime in London, not me……

….Kahn reminds me very much of our very dumb and incompetent Mayor of NYC, de Blasio, who has also done a terrible job – only half his height. In any event, I look forward to being a great friend to the United Kingdom, and am looking very much forward to my visit. Landing now!

Prince Harry will meet Trump at one of the planned lunches. But his wife, the Duchess of Sussex (Meghan Markle), will sit it out. Her name is not on any of the official itineraries. Markle may have decided she would rather stay at home with newborn son Archie. Or perhaps it’s the man himself. In 2016, she called him “misogynistic.”

Trump has denied calling Markle “nasty” despite an audio recording of his comments.

The president has also not been invited, unlike President Obama, to address Parliament. John Bercow, the speaker of the House of Commons, who makes that decision, has said he is “strongly opposed” to Trump addressing British lawmakers.

Bercow said that being invited to address Parliament was “an earned honor.”

In a speech in Washington last week, Bercow said that over the past two years “nothing has happened since then to cause me to change my mind.”

What else is the president doing in Europe?

On Thursday, he will fly to Ireland for a meeting with leader Leo Varadkar. The meeting will take place at Shannon Airport, not Trump’s golf club and hotel in Doonbeg, in County Clare, which he will visit later the same day. The White House said that the two leaders will discuss “a range of bilateral issues” and “shared international interests and priorities.” Translation: Trump wants to play golf in his family’s ancestral homeland.

The next day, Friday, Trump will travel to France for further D-Day commemorations in Normandy. He will visit the Normandy American Cemetery, established by the U.S. First Army in 1944. It is the first American cemetery on European soil and contains the graves of 9,380 American military dead, most of whom lost their lives in the D-Day landings.

While in France, Trump will also hold talks with French President Emmanuel Macron. Macron and Trump have enjoyed a “bromance” of sorts, filled with awkward embraces, macho handshake and military parades. They also regularly attack each others’ politics – Macron for his centrism, Trump for his nationalism – in tweets and speeches.

D-Day: Five things to know on the 74th anniversary