Former President Donald Trump on Friday welcomed Elon Musk’s takeover of Twitter, even as he defended his own troubled social media startup and said its bigger rival needed to root out bots and fake accounts.

Billionaire Musk sealed the deal on Thursday evening, and immediately triggered speculation that Trump would soon return to Twitter by firing executives responsible for his ban.

Trump said he was delighted the deal had gone through.

‘I am very happy that Twitter is now in sane hands, and will no longer be run by radical left lunatics and maniacs that truly hate our country,’ he said in a post on Truth Social.

‘Twitter must now work hard to rid itself of all of the bots and fake accounts that have hurt it so badly.

‘It will be much smaller, but better.’ 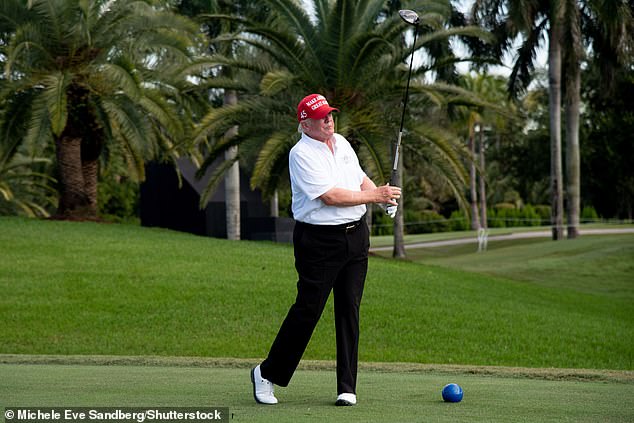 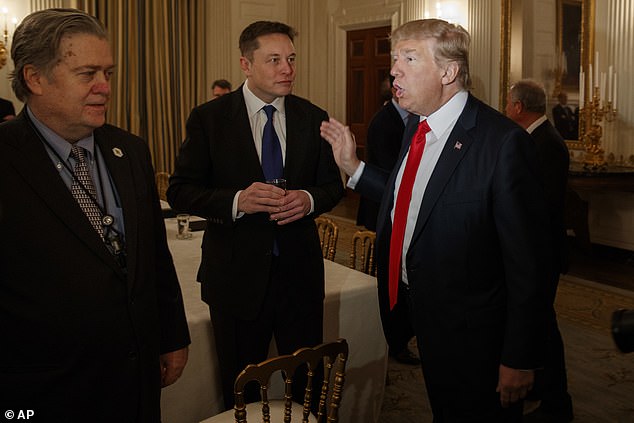 The two have had a complicated relationship. Trump once called Musk a ‘genius,’ but the tech billionaire said in 2015 he didn’t want the New York property mogul to be president and quit his climate advisory board once Trump was at the White House. The two are pictured here at the White House in 2017 beside Steve Bannon at a meeting with business leaders 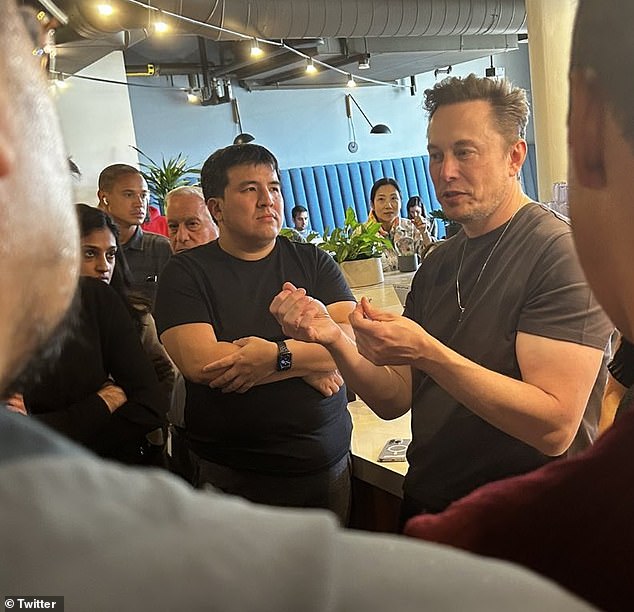 Elon Musk speaks with employees including fired top counsel Vijaya Gadde (left) Thursday after taking over at Twitter. She was responsible for permanently banning President Trump from the site – a move that Musk says he will reverse

Thursday brought an end to a protracted legal battle over Musk’s deal to take over Twitter.

He signed a $44 billion deal to acquire the platform in April but then tried to back out, claiming inflated user numbers.

A judge in Delaware ordered that it go through by Friday.

Earlier this week he changed his Twitter profile to ‘Chief Twit’ and filmed himself walking into the company’s San Francisco headquarters. ‘Entering Twitter HQ — let that sink in,’ he wrote in a post.

Conservative figures who were banned from the platform now hope that his stated commitment to free speech will allow them to return.

That could be a blow to a rash of Twitter clones catering to the far right, such as Trump’s own Truth Social.

While welcoming Musk to Twitter, Trump used his post to claim extraordinary success for his own social media effort.

‘Truth Social has become somewhat of a phenomena. Last week it had bigger numbers than all other platforms, including TikTok, Twitter, Facebook, and the rest,’ he said, without citing any evidence.

‘It also looks and works better to my eye.’

Agrawal took over from Jack Dorsey when he stood down as CEO in November 2021.

He has frequently clashed with Musk over Twitter’s user numbers, with Musk claiming the social media platform exaggerates how many users it has and downplays the number of spam accounts, fakes or bots.

Agrawal insisted that only around 5 percent of Twitter’s accounts were bots, which infuriated Musk. Musk responded to Agrawal’s lengthy explanation of their calculations with a ‘poop’ emoji.

The pair also argued in private.

They exchanged text messages that indicated a falling out, as revealed by documents disclosed in the legal battle between the billionaire and the social network.

On April 26, Dorsey, Musk and Agrawal convened a Google Hangout to discuss the takeover, and the conversation did not go well.

‘At least it became clear that you can’t work together. That was clarifying,’ Dorsey said. 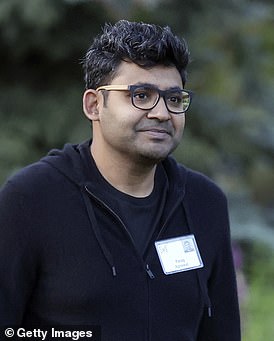 It was Segal who, in February 2021, announced that Twitter’s ban on Donald Trump was permanent.

Musk has said that decision was wrong, and he intends to reverse it.

‘Remember, our policies are designed to make sure that people are not inciting violence, and if anybody does that, we have to remove them from the service and our policies don’t allow people to come back.’

Segal also likely irked Musk with his cautious approach to finance – in particular his announcement in November that he didn’t think investing in cryptocurrency was a good move for Twitter.

Musk is famously a fan of cryptocurrency, and champions Doegecoin. 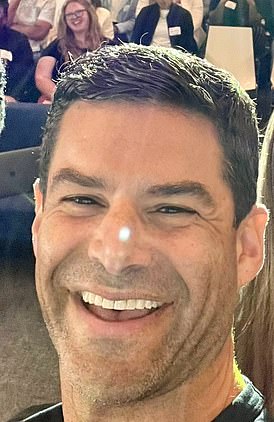 Gadde, described as Twitter’s ‘moral compass’, was a passionate defender of Twitter’s role as a censor and arbitrator. She was long considered one of the people who would be fired first by Musk.

In October 2019 she was the architect of the idea to stop political advertising on the platform, and shortly before the election she played a key role in the decision to suspend The New York Post’s account when it reported on Hunter Biden’s laptop. Twitter claimed it violated the company policy against promoting hacked material; critics were angered by the heavy-handedness, and Twitter later apologized.

In January 2021, it was Gadde who rang then-CEO Jack Dorsey – on vacation in Hawaii – to inform him they were banning Donald Trump, for violating policies against inciting violence. 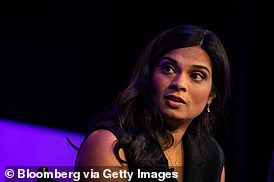 Edgett, a close ally of Gadde, emailed staff last week to say there were no plans for mass layoffs – a move which may have irked Musk, given the impending takeover.

‘Please note that there will continue to be a great deal of public rumor and speculation as we get closer to closing the deal,’ Edgett wrote.

‘First, we have no confirmation of the buyer’s plans after closing and recommend not following any rumors or leaked documents, but instead awaiting facts from us and the buyer directly.’

Edgett added that there were ‘targeted cost-cutting discussions and plans’ earlier in the year, but those discussions stopped when Twitter and Musk signed a deal. Since then, there have been no plans for company-wide layoffs, he said.

He also warned employees earlier this year to refrain from sharing their opinions on Musk’s bid on social media.

A Twitter whistleblower claimed that senior figures at  the company told him to destroy documents.

Peiter Zatko, the former head of security, who was fired in January, was seized upon by Musk as an ally in his fight to get to the bottom of the mystery about Twitter’s user numbers.

Zatko’s complaint, in which he accused Twitter of lying about its security practices and violating a 2011 agreement with the Federal Trade Commission, was described by Agrawal and Edgett as false.

‘We have never made a material misrepresentation to a regulator, to our board, to all of you,’ Edgett said. ‘We are in full compliance with our F.T.C. consent decree.’ 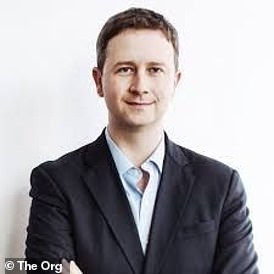 Personette worked as Twitter’s chief customer officer until she was fired on October 26.

The former CCO Personette was handed $11.2 million as part of Musk’s house clearance.

Just one day before she was culled from the workforce, she wrote on Twitter: ‘Had a great discussion with Elon Musk last evening! Our continued commitment to brand safety for advertisers remains unchanged. Looking forward to the future!’ 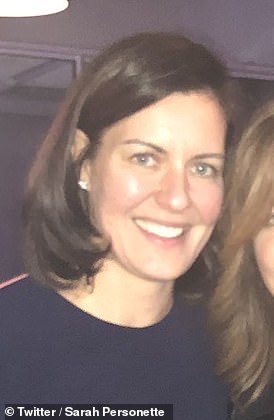