Donald Trump ordered his staff to ‘bust some heads and make some arrests’ to clear out Black Lives Matter protesters surrounding the White House in summer 2020, Mark Meadows’ book claims 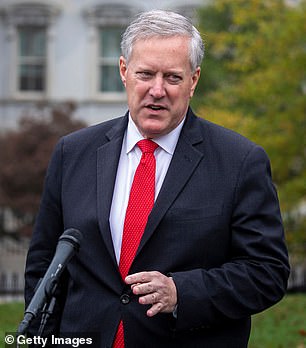 Former President Donald Trump told his then-Chief of Staff Mark Meadows to ‘bust some heads and make some arrests’ when Black Lives Matter activists were protesting outside the White House in Lafayette Square in June 2020, Meadows wrote in his new book.

The demonstrators were cleared for Trump’s now-infamous photo op holding a Bible in front of St. John’s Episcopal Church.

Ivanka Trump reportedly came up with the stunt that day, but according to Meadows, Trump had already been agitated that protesters were blocking the street in front of the White House.

In his new memoir out Tuesday, titled The Chief’s Chief, Meadows wrote that Trump ‘was growing anxious’ after ‘he had given an order for the park to be cleared, and it was not being followed.’

That demonstration and others occurring nationwide at the time were sparked by the killing of black Minneapolis resident George Floyd by white police officer Derek Chauvin.

‘The various law enforcement agencies that were supposed to be under the command of Bill Barr were clearly not communicating with one another, and it did not seem that a single arrest had yet been made,’ Meadows recounted of June 1, 2020.

The ex-White House official claimed to have called Trump when he was ‘fed up’ and believed the protesters were trying to pull down a statue of Andrew Jackson.

‘It looks like we have a situation out there,’ Meadows recounted saying. 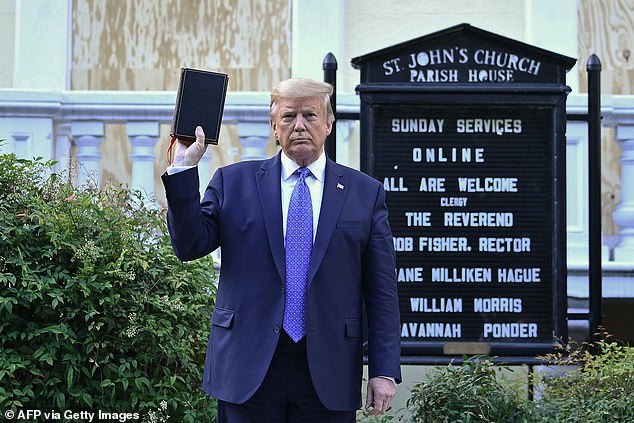 The events described in this excerpt preceded Trump’s now-infamous photo shoot in front of St. John’s Episcopal Church on June 1, 2020 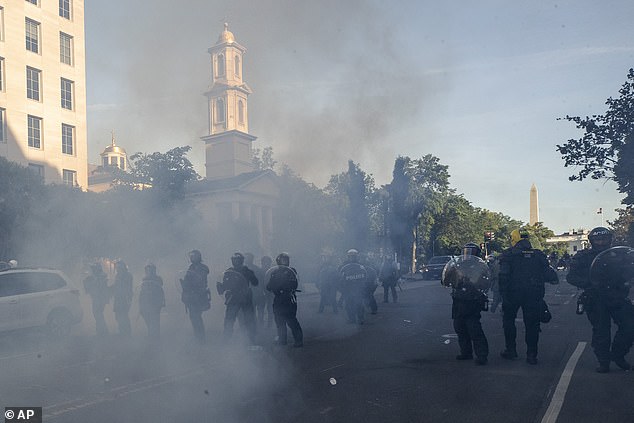 US Park Police and National Guard troops violently cleared protesters from Lafayette Square, which was directly between the church and the White House

‘They’re trying to tear down statues and vandalizing the park. I assume that we have the authority to deploy whatever law enforcement is necessary to fix this?’

That was when Meadows said Trump ‘had enough.’

Trump told him, according to Rolling Stone, ‘Not only do you have the authority… I want you to go out there and bust some heads and make some arrests. We need to restore order.’

‘I was not quite prepared to crack anything,’ Meadows wrote.

But he detailed going to the Secret Service chief at the front door of the White House and telling him there were ‘orders from President Trump to open up Pennsylvania Avenue.’

Meadows claimed the law enforcement officers in charge ‘were resisting’ Trump’s calls to crack down on the activists but ‘it was clear that the officers on the ground felt the same way President Trump did.’

Meadows, a former member of Congress from North Carolina, landed himself in hot water last night when the House Select Committee investigating the January 6 Capitol riot said it had ‘no choice’ but to move forward with a contempt vote in the House if Meadows didn’t show up for his scheduled deposition this morning.

As he told lawmakers yesterday through his attorney, Meadows did not appear.

‘The Select Committee is left with no choice but to advance contempt proceedings and recommend that the body in which Mr. Meadows once served refer him for criminal prosecution,’ Thompson wrote on Tuesday.

But among the materials he did turn over is a 38-page PowerPoint presentation titled ‘Election Fraud, Foreign Interference & Options for 6 JAN’ that was to be provided ‘on the hill.’

Thompson’s letter reveals that Meadows was exchanging emails about the lengthy presentation up until the day before the Capitol attack.

The letter to Meadows’ lawyer also revealed further bombshell details about communications that the former North Carolina congressman did send over to the committee.

One of the most damning appears to be a text exchange between Meadows and an unnamed federal lawmaker that took place after the November 2020 election.

The letter refers to a ‘November 6, 2020, text exchange with a Member of Congress apparently about appointing alternate electors in certain states as part of a plan that the Member acknowledged would be “highly controversial” and to which Mr. Meadows apparently said, “I love it”…’

Thompson’s letter means the House could set up a vote to refer Meadows to the Justice Department for criminal charges as early as this Friday.