Home » World News » Trump health officials scramble to clarify confusing statements about how vaccines will be released to states.

When the federal government announced Tuesday that it was releasing a stockpile of vaccine doses, some state health officials expected to get a boost in their weekly shipments to help address soaring demand for the vaccines as the pandemic rages out of control.

But now, the states face a stark reality. That stockpile consisted only of vaccines earmarked for booster shots for people who had already received a first dose. That means the release of this pool will not expand inoculations to a new group of people. Federal officials have said second doses will be prioritized in the weekly shipments to ensure everyone can get a booster shot.

A senior administration official said on Friday that the government expects the two companies producing vaccines, Moderna and Pfizer, to supply between eight and 12 million vaccine doses per week to the American public over the next several weeks — shipments that will then be divided among those getting their first and second shots. The two companies have deals with the federal government to supply a total of 200 million doses to the United States — or enough to fully vaccinate 100 million people — by the end of March.

The confusion stemmed from a call that Alex M. Azar II, the federal health and human services secretary, held on Tuesday with reporters and top Operation Warp Speed officials, in which he chided states for not efficiently using the vaccines they had already been sent and urged them to open up eligibility to people 65 and older. Some states, including New York, quickly followed the federal government’s advice and opened their doors to a wider group of people, prompting a surge of interest — and confusion — as thousands of newly eligible people sought appointments to get vaccinated.

“This next phase reflects the urgency of the situation we face — every vaccine dose that is sitting in a warehouse rather than going into an arm could mean one more life lost or one more hospital bed occupied,” Mr. Azar said.

Later in the call, he said that “We are releasing the entire supply we have for order by the states, rather than holding second doses in physical reserves.” Going forward, he said, no vaccine doses would be held in a stockpile, and each weekly shipment would go toward people needing a first as well as a second dose.

That announcement prompted several states to assume that they would get an influx of new doses that could be used to vaccinate new people, as first reported by the Washington Post.

On Friday, Gov. Kate Brown of Oregon, a Democrat, tweeted that she had received “disturbing news” on Thursday evening: “States will not be receiving increased shipments of vaccines from the national stockpile next week, because there is no federal reserve of doses.” She added, “I am shocked and appalled that they have set an expectation on which they could not deliver, with such grave consequences.”

However, senior administration officials clarified on Friday that all of the reserve doses were already dedicated to people who had gotten the vaccine, and that Mr. Azar was actually just spelling out the logical extension of a distribution policy that had been established by top federal officials in December, when shipments began.

In a statement, a spokesman for the federal health department said that nearly 13 million doses were made available to states so they could order their first and second doses, which is “millions more” than previous weeks. The spokesman, Michael Pratt, also said that many states have not ordered up to the full amount that they have been allocated by the federal government.

“I think states have been doing their best to plan with whatever information they can get from the feds on expected future allocations, and then revising those plans if they get less,” said Dr. Marcus Plescia, the chief medical officer for the Association of State and Territorial Health Officials. “What is more concerning is that public expectations have been raised and limited supply may lead to significant disappointment.”

During the first few weeks of distribution, Gen. Gustave F. Perna, the chief operating officer of Operation Warp Speed, the federal effort to develop and distribute a vaccine to the American public, decided to hold back half of the weekly shipments of vaccine to save those doses for the people who had received an initial shot. He said at the time that it was important to be cautious as manufacturing was getting underway, and to hold onto a stockpile of second doses in the case of any manufacturing glitches.

Even then, his decision came under criticism by public health experts who argued that the focus should be on getting as many people as possible their first dose of a vaccine — since clinical trials showed even the first dose offers some protection — given that the country was facing record cases, hospitalizations and deaths.

Senior administration officials said Friday that the remaining second doses drawn from that reserve are being distributed this week and next week to the states, and that they were never intended to be used toward vaccinating additional people.

From now on, officials said Tuesday, each weekly shipment from the manufacturers will include doses for new people as well as second doses for those who are due for their booster shots.

Scientists and pharmaceutical companies developed the two federally authorized Covid-19 vaccines in record time, but their distribution has fallen far short of initial goals. Federal officials had promised that 20 million people would be immunized before the end of 2020, but only about 9.7 million have received their first dose so far.

Federal, state and local officials have traded blame for the faulty rollout, with the federal government accusing states of being overly prescriptive in who can get the vaccine and not having put in place plans to quickly distribute it. But state and local authorities have countered that they were not given enough money to do the job properly, and scaling up distribution has been difficult because they cannot predict how many doses they will have from week to week.

Even as states have complained about federal deliveries, many have struggled to give out all of the vaccine doses they have been sent. Overall, only about 36 percent of the 30.6 million doses that have been distributed have been injected into arms, according to federal data.

But as vaccination drives have picked up, that is changing and some states and local governments have warned they are running out. On Friday, New York City said it expected to exhaust its supply of doses by early next week. 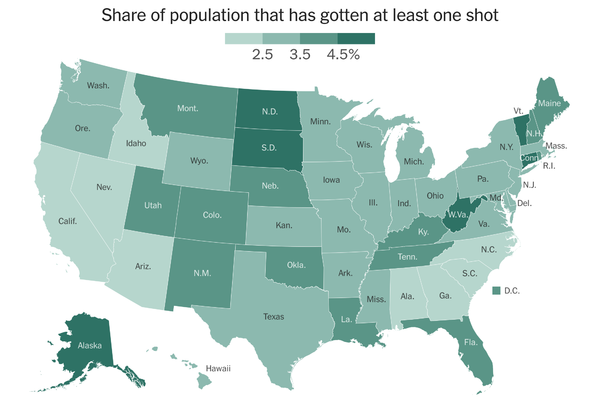 See How the Vaccine Rollout Is Going in Your State

The government says it has distributed about 31.2 million doses of Covid-19 vaccines to states and other jurisdictions. See where the shots have gone.