2022 comes early! Spectacular moment a truck loaded with fireworks meant to see in the New Year explodes after crashing in Kazakhstan

This is the spectacular moment a huge truck loaded with fireworks intended for New Year festivities exploded on a motorway in Kazakhstan on Saturday evening.

The DAF truck was travelling along the motorway from Kazakh capital Nur-Sultan to the northern town of Shchuchinsk roughly 150 miles away when the vehicle overturned and caught fire.

The trailer, which according to a emergencies ministry spokesperson was carrying a whopping 324 square feet of fireworks, burst into flames which set off an impromptu and truly stupendous pyrotechnics display.

The driver emerged unscathed thanks to the protection of the driver’s cabin, which sheltered him from the crash, the explosions of the fireworks and the fire which ultimately burned through the entire trailer. 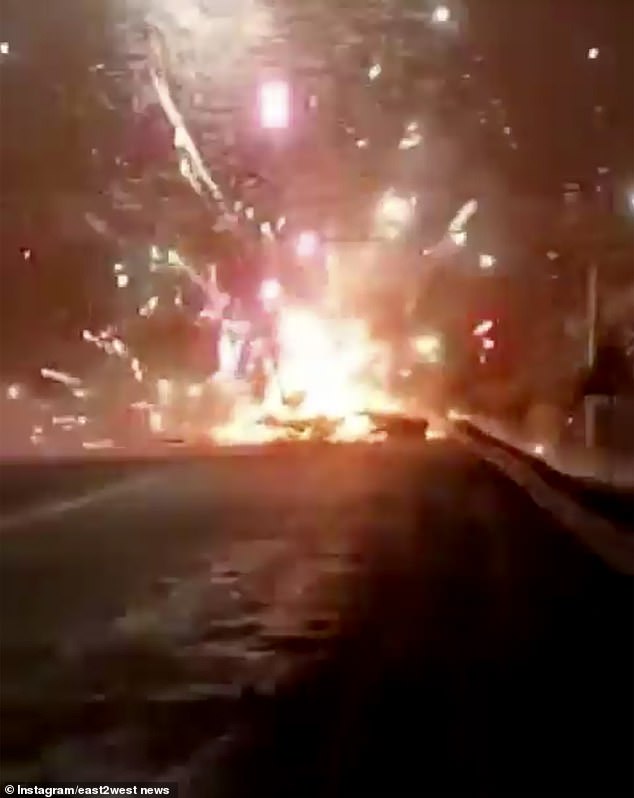 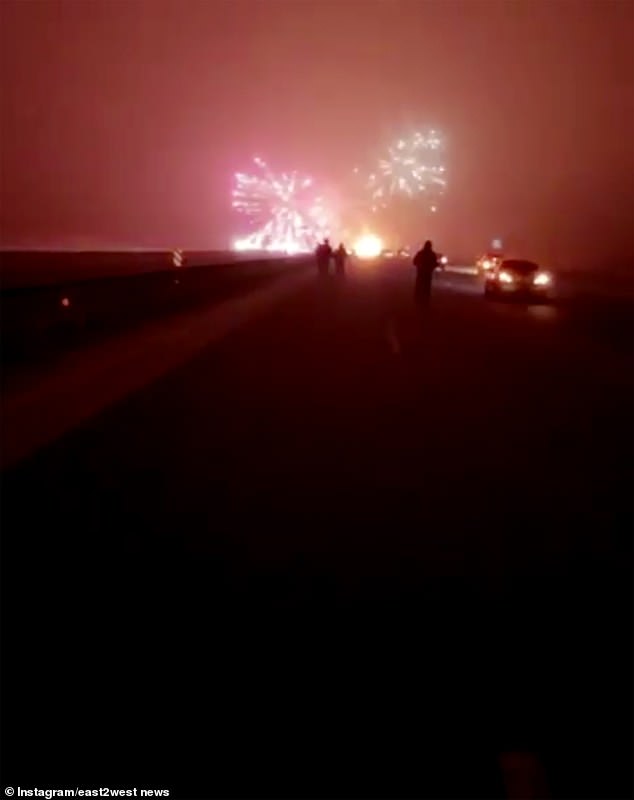 The trailer, which according to a emergencies ministry spokesperson was carrying a whopping 324 square feet of fireworks, burst into flames which set off an impromptu and truly stupendous pyrotechnics display 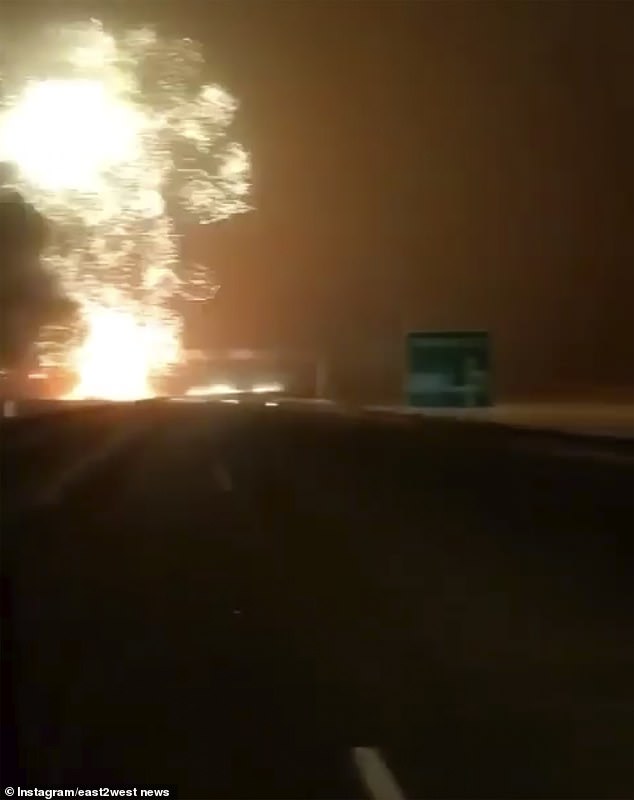 Kazakh police said that there were no casualties when the tens of thousands of pounds worth of fireworks lit up the night sky.

It is not yet known what caused the initial accident which resulted in the crash.

The truck blocked the motorway as the fire set off the pyrotechnic display, blocking the traffic and forcing bystanders to stop and enjoy the show.

Road users screeched to a halt and leapt from their cars to film the display, which went on for several minutes as the fire in the trailer continued to burn.

Those who witnessed the incident took to social media to post their videos and comment on the incredible and unplanned display.

One witness said: ‘Amazing unplanned fireworks,’ while another labelled it ‘the most spectacular road accident of the year.’

Police said the trailer was totally destroyed in the blaze, and the driver of the truck was left with nothing but a driver’s cabin and a burned-out shell.

An emergencies ministry spokesman said: ‘There was a fire in the trailer of a DAF truck loaded with pyrotechnic products covering an area of 30 square metres (324 square ft).

‘The cab was not damaged from the fire, but the trailer burned out completely. There were no casualties.’

The emergencies ministry spokesman told media that the fire service managed to get the fire under control at 10.05pm, but it took another half an hour before the truck could be moved and the motorway cleared of debris.

Traffic was restored at 10.40pm according to the spokesman.

The fireworks were intended for New Year 2022 displays in Kazakhstan. 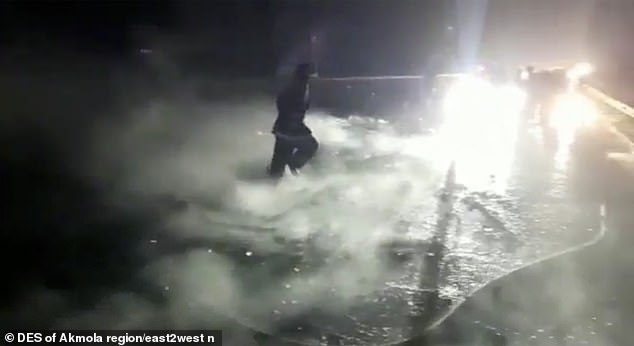 Firefighters managed to get the blaze under control by 10.05pm and after half an hour of clearing debris from the road managed to restore traffic by 10.40pm

This is the terrifying moment children and parents were left screaming in panic after a festive performance involving fireworks went terribly wrong.

The show involved children aged under seven and was held at a nursery in Kazakhstan.

Local media believe that staff had intended to use safe indoor fireworks but had mistakenly used outdoor ones – prompting the scenes of terror.

Parents were watching a performance by children dressed in Santa costumes – who in the former Soviet Union traditionally delivers presents at New Year and not Christmas.

The children were jumping up and down excitedly as they watched the fireworks.

However, the boxes suddenly exploded, sending bright flashes and smoke and  causing fear and chaos. 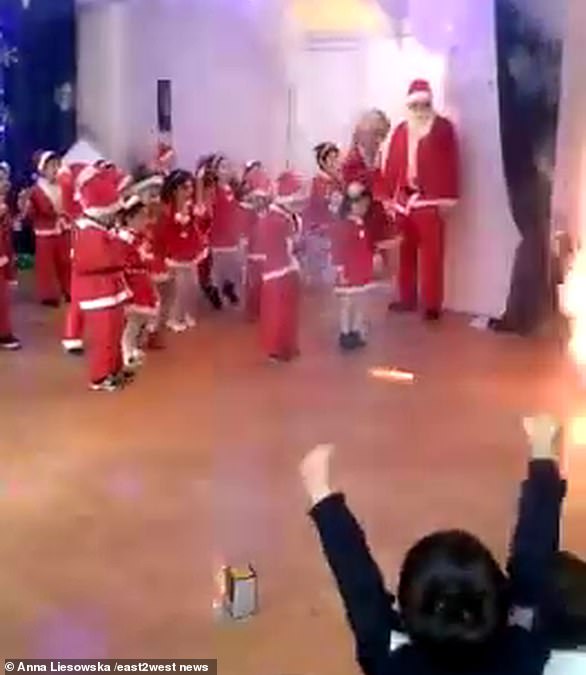 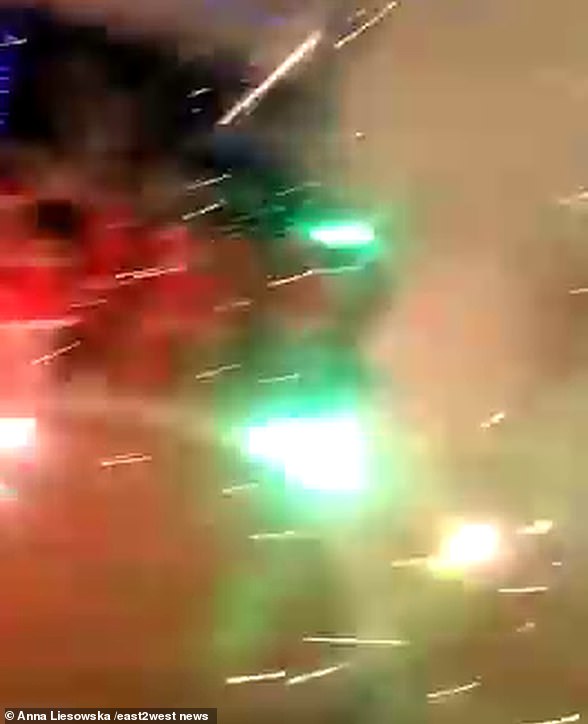 However, it soon became clear that they were in fact outdoor fireworks, causing terror and panic at the performance