Among the five victims killed in the Colorado gay club shooting on Saturday was a transgender woman who just moved to Colorado Springs and a married mother who was visiting the club with a friend when she was killed.

Kelly Loving, 40, and Ashley Paugh, 35, were shot dead along with barmen Derrick Rump and Daniel Aston.

Anderson Lee Aldrich, 22, is in custody on five counts of murder and five hate crime charges. His motive remains unknown. 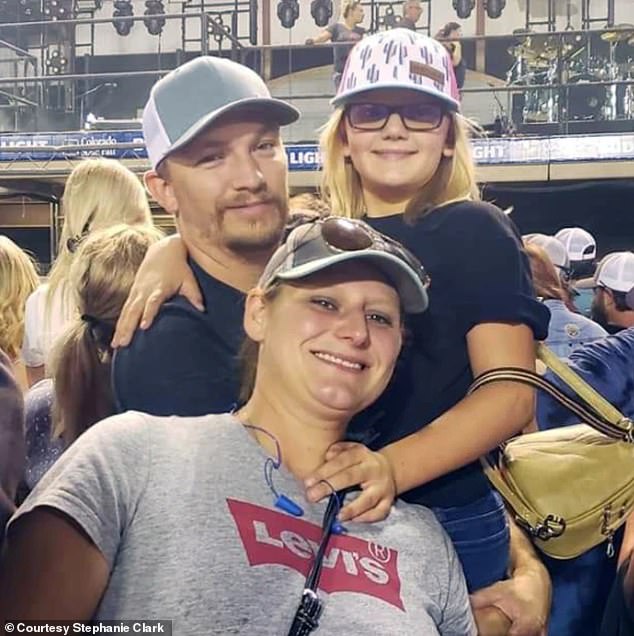 Ashley Paugh, pictured with her husband and 11-year-old daughter, was among those killer on Saturday. She was visiting the club with a friend when the gunman opened fire

Paugh’s sister told NBC they were ‘angry’ about her death. 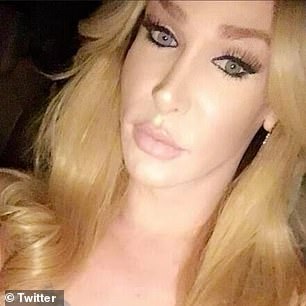 ‘Nothing will ever be the same without her. Right now, I don’t want to laugh.

‘She was a loving, caring person who would do anything for anybody.

‘We’re gonna miss her so much,’ she said.

‘I had just got off the phone with her that same day.

‘We had video calls that same day. She was a kind person, she was loving, always fighting for people,’ she said.

She added that Kelly had not long moved to the area, and was excited about getting to know the LGBTQ community in Colorado Springs.

One of her closest friends was Natalee Bingham, who survived the Pulse Orlando shooting in 2016. 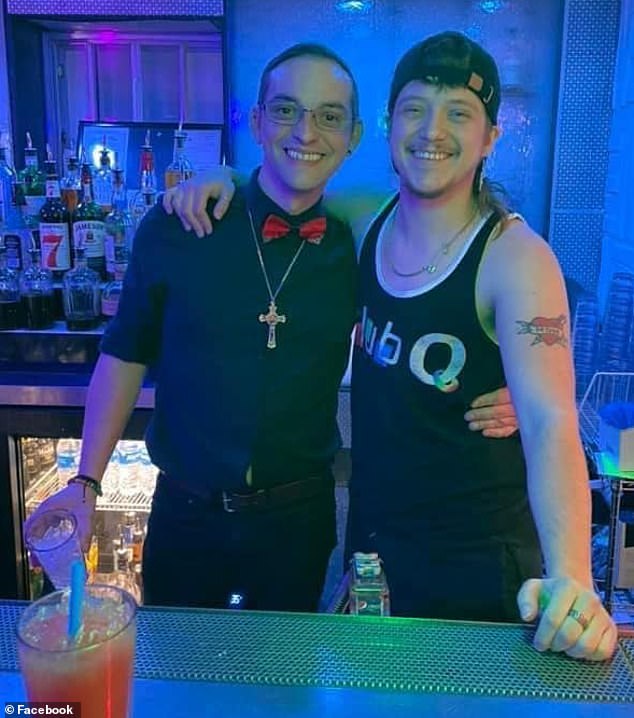 Bartenders Derrick Rump and Daniel Aston were also killed in the bigoted attack. Two other victims are yet to be named publicly

‘She taught me a lot about my whole transition and is someone I look up to in the community, it’s really hitting home it’s hurting more and more,’ Natalee said.

Survivors have told how they ducked behind the bar when they heard the gunman open fire on Saturday shortly before midnight.

At first, some said they thought the sounds were part of the music.

‘I was bartending and then I suddenly heard a loud shooting noise.

‘I looked up and then those noises began to fire off multiple times repeatedly.

‘I saw a person with a gun, and I immediately ducked behind the bar and glass was flying around me,’ said bartender Michael Anderson in an interview with The Mirror.

‘I was scared. I was trapped. I wanted to get out of that building. I just was afraid I wouldn’t be able to talk to my mom.’

Once outside, he saw the barrel of a gun pointing out onto the patio.

‘And that was the moment I was most terrified. Because I knew we were next. He was gonna find us,’ he said.

Inside, patrons tackled the gunman to the ground and beat him with one of his weapons.

It stopped him from firing his AR-15, and likely saved dozens of lives. 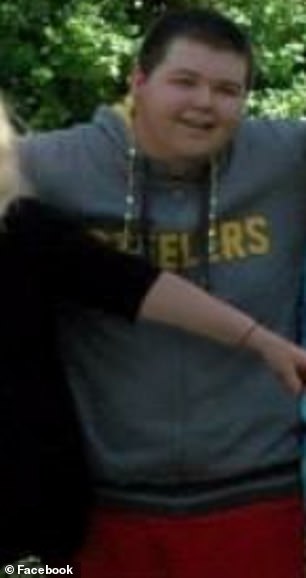 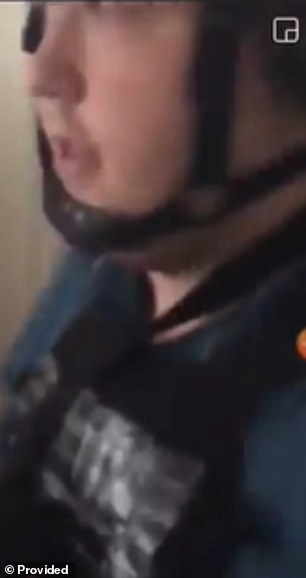 Anderson Lee Aldrich is shown, left, in a family photo and right, in a June 2021 livestream where he threatened to blow up a house where his mother was renting a room. He is now charged with five counts of murder 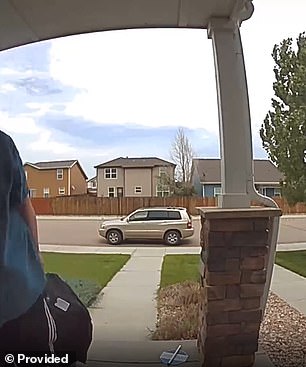 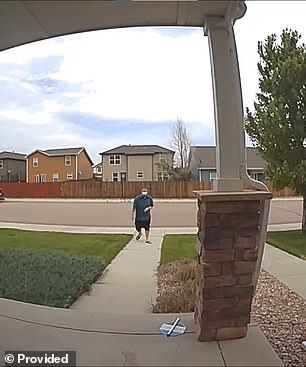 Anderson Lee Aldrich is shown last year, showing up at the house where his mother was renting a room, after threatening to blow up his grandparents, with whom he’d been living nearby. His mom helped him into the house and had called the landlord to tell her not to tell anyone where he was, she claimed on Monday 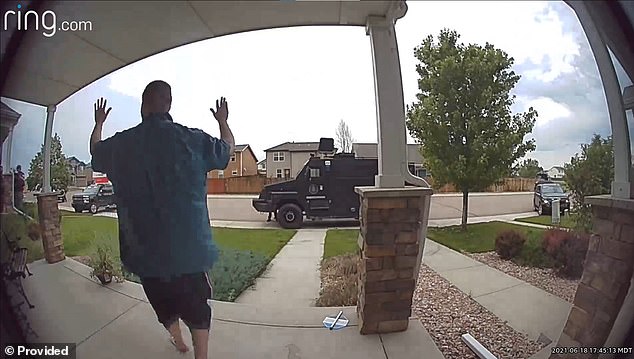 Anderson Lee Aldrich, 22, was taken into custody at the house where his mother, Laura Voepel, was renting a room in June 2021 in Colorado Springs

‘After a minute or two, I wasn’t sure if it was over or not, so I got up and decided to make a run for it,’ Anderson said.

Once the shooting had stopped, he went back into the club.

‘I found a man lying on the floor after being shot in the neck.

‘When I went inside, I saw that two people had seemingly detained someone on the ground and were kicking them and yelling at them. 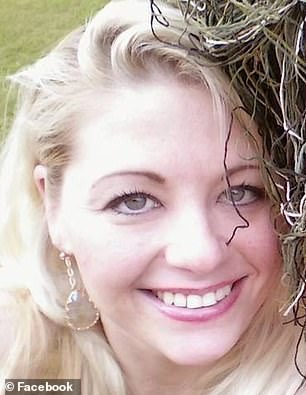 ‘I ran behind the bar and grabbed my things and ran to my car. The cops arrived in mass numbers by this time,’ he said.

Aldrich, 22, was taken into custody at the house where his mother, Laura Voepel, was renting a room in June 2021 in Colorado Springs. He was charged with felony menacing and kidnapping but was released from custody.

On Saturday, he is accused of opening fire in Club Q just before midnight, murdering five people and injuring others. The club’s owners say he arrived with ‘tremendous firepower’ – an AR-15 rifle, six magazines of ammo and a handgun. Patrons used the handgun he was carrying to beat him to the ground until police arrived. The sheriff’s department has not yet released his mugshot.

The incident last year involved Aldrich fleeing to the home where his mother was renting a room. He had been living nearby with his grandma, Pam Pullen, and her husband Jonathan, but went on the run after threatening to kill them.

His mother Laura is shown on Ring camera footage from that day welcoming her into the house, helping him with his suitcase. Once inside, he filmed himself in SWAT gear, broadcasting live on his mother’s Facebook account.

It was initially reported that his mother, Laura, had called police. 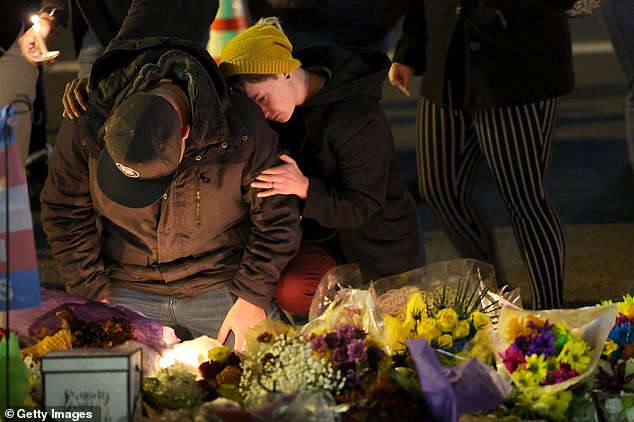 But landlord Leslie Bowman tells DailyMail.com she was the one who alerted authorities to her home, after Voepel – the suspect’s mother – phoned her to tell her ‘people’ were looking for her son.

‘I was not OK with him hiding out in my house from the police.

‘I then called police and within three minutes, an officer called me back and said they were looking for him,’ she said.

Aldrich was taken into custody on charges of felony menacing and kidnapping. He is shown surrendering to police in one of the videos provided to DailyMail.com.

The charges were however dropped this year.

It’s unclear if he owned the weapons used in Saturday’s attack at the time, or if he purchased them in the year since.

Either way, there are resounding questions now about how he was able to have access to them.