Ticket reseller viagogo has been fined $7 million after the Federal Court found it misled consumers in Google advertisements and on its website by suggesting it was an official seller affiliated with entertainment and sporting events.

In a decision in April last year, Federal Court Justice Stephen Burley found viagogo – which resold tickets to events including Queen and Adam Lambert, The Book of Mormon musical, the Australian Open tennis tournament, and Ashes cricket matches – had not made it clear it was not an authorised ticket vendor. 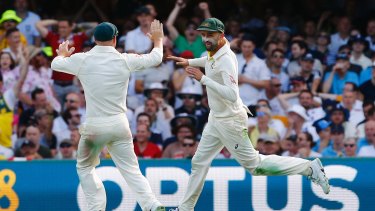 Day one of the Ashes Test at The Gabba in Brisbane in 2017.Credit:Jason O’Brien/PA Wire

It was also not clear to consumers that "booking fees" of up to 28 per cent of the ticket price applied, on top of advertised prices, or that claims about the scarcity of tickets remaining for an event did not refer to the venue as a whole but only to tickets available through the reseller's website.

The court found viagogo had suggested it was an official ticket seller by using the phrase "Buy Now, viagogo Official Site" in sponsored advertisements on Google that directed consumers to the Switzerland-based ticket reseller's Australian website, which was its "virtual shopfront in Australia".

The company has since made changes to its website and it dropped the word "official" from Google advertisements in December 2017. 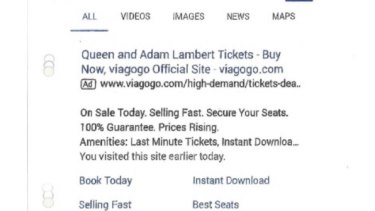 A Viagogo ad on Google from June 21 2017, in which it claims to be the “official site” for Queen and Adam Lambert tickets.

The consumer watchdog had received thousands of complaints about the ticket reseller in recent years and launched Federal Court proceedings in 2017 over conduct between May 1 and June 26 that year.

In a decision on penalties on Friday, Justice Burley ordered viagogo to pay a total of $7 million for four separate breaches of Australian consumer law, covering representations about the nature of its services, the quantity of tickets available and its pricing. He also ordered viagogo to pay the ACCC's legal costs.

Justice Burley said viagogo had misrepresented that consumers could "purchase official, not resold, tickets" when it was "far from an authorised vendor of tickets".

This was a "very serious misrepresentation, because it fundamentally misled consumers as to the nature of viagogo's business in order to attract consumers", he said.

Viagogo was not an official seller but provided "a platform for third parties to sell tickets second hand".

Consumers drawn in by the misleading Google advertisement were "exposed to further misleading conduct" on the viagogo website, he said.

The ACCC had submitted the penalty should be between $12.1 million and $13.4 million, while viagogo contended it should not be more than $3 million.

Justice Burley said it was also "appropriate to grant an injunction restraining viagogo from engaging in the impugned conduct" and order viagogo to participate in a compliance program.

Viagogo submitted confidential information to the court about the number of clicks it had received on the Google advertisements and its worldwide and Australian profits in the 2017 calendar year, all of which was redacted in the publicly-available judgment of the court.

The most important news, analysis and insights delivered to your inbox at the start and end of each day. Sign up here.