Singapore: Chinese Defence Minister Wei Fenghe says the bloody crackdown on protesters around Beijing's Tiananmen Square 30 years ago was the "correct" decision, citing the country's "stability" since then.

Responding to a question at the Shangri La Dialogue in Singapore on Sunday after a hardline speech about China and international security co-operation, he called the protests political "turbulence". 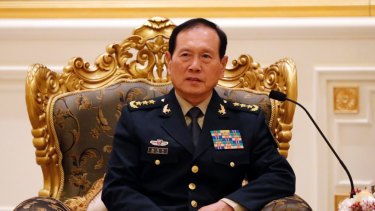 It is rare for Chinese government officials to acknowledge the events of June 4, 1989 and references to it are heavily censored in China.

"Everybody is concerned about Tiananmen after 30 years," Wei said.

"Throughout the 30 years, China under the Communist Party has undergone many changes – do you think the government was wrong with the handling of June Fourth? There was a conclusion to that incident. The government was decisive in stopping the turbulence."

He added that China's development since 1989 showed that the government's actions were justified.

The Tiananmen protests were "political turmoil that the central government needed to quell, which was the correct policy," he said.

"Due to this, China has enjoyed stability, and if you visit China you can understand that part of history."

Tuesday marks the 30th anniversary of the protests, in which Chinese troops opened fire to end the student-led unrest. Rights groups and witnesses say hundreds or even thousands may have been killed. China has never provided a final death toll.

His comments echoed those of Defence Ministry spokesman Wu Qian, who last week decried the use of the word "suppression" to describe the military's response to the 1989 protests.

China at the time blamed the protests on counter-revolutionaries seeking to overthrow the party.

The event will not be officially commemorated by the ruling Communist Party or government.

In a combative speech at the annual security conference, Wei warned its military will "resolutely take action" to defend Beijing's claims over self-ruled Taiwan and disputed South China Sea waters.

"Should anybody risk crossing the bottom line, the [People's Liberation Army] will resolutely take action and defeat all enemies … and fight to the end," Wei said.

He defended China's right to build "limited defence facilities" in the contested South China Sea, where its sweeping claims are challenged by several smaller neighbours.

On Saturday, US Acting Defense Secretary Patrick Shanahan told the same gathering that China's efforts to militarise man-made outposts in the South China Sea are a "toolkit of coercion," saying activities by Beijing the US perceives as hostile must end and the US would no longer "tiptoe" around Chinese behaviour in Asia.

China has been incensed by recent moves by US President Donald Trump's administration to increase support for self-ruled and democratic Taiwan, including US Navy sailings through the Taiwan Strait that separates the island from mainland China.

"No attempts to split China will succeed. Any interference in the Taiwan question is doomed to failure," said Wei, dressed in his uniform of a general in the People's Liberation Army.

The US, like most countries, has no formal ties with Taiwan, but is its strongest backer and main source of weapons.

China translates the word "tong yi" as "reunification", but it can also be translated as "unification", a term in English preferred by supporters of Taiwan independence who point out the Communist government has never ruled Taiwan and so it cannot be "reunified".

China-US ties have become increasingly strained due to a bitter trade war, US support for Taiwan and China's muscular military posture in the South China Sea, where the US also conducts freedom-of-navigation patrols.