JERUSALEM — Thousands of ultra-Orthodox Israelis on Sunday thronged the funeral of a prominent rabbi in Jerusalem, flouting the country’s ban on large public gatherings during the pandemic.

The funeral procession for Rabbi Meshulam Soloveitchik, who died at age 99, wended its way through the streets of Jerusalem in the latest display of ultra-Orthodox Israelis’ refusal to honor coronavirus restrictions.

The phenomenon has undermined the country’s aggressive vaccination campaign to bring a raging outbreak under control and threatened to hurt Prime Minister Benjamin Netanyahu in March elections. Two challengers accused Netanyahu of failing to enforce the law due to political pressure from his ultra-Orthodox political allies.

Densely packed throngs of people gathered outside the rabbi’s home, ignoring restrictions on outdoor gatherings of more than 10 people. Many did not wear masks. Thousands of black-garbed ultra-Orthodox funeral-goers coursed past the city’s main entrance toward the cemetery where Soloveitchik was to be buried. A handful of police officers blocked intersections to traffic to allow participants to pass, but appeared to take no action to prevent the illegal assembly.

Israeli media said Soloveitchik, a leading religious scholar who headed a number of well-known seminaries, had recently suffered from COVID-19.

Alon Halfon, a Jerusalem police official, told Channel 13 TV that police had little choice but to allow the massive procession to proceed. He said police action had helped reduce the crowd size and that some 100 tickets were issued for health violations. But in such a densely packed environment, with children among the crowd, attempting to disperse the crowd would have been “unwise and dangerous.”

Israel’s Health Ministry has recorded over 640,000 confirmed cases of the coronavirus and at least 4,745 deaths since the start of the pandemic.

Israel has recently been averaging over 6,000 confirmed cases of the coronavirus each day, one of the highest infection rates in the developing world. At the same time, Israel has vaccinated over 3 million of its citizens, also one of the highest rates per capita in the world. 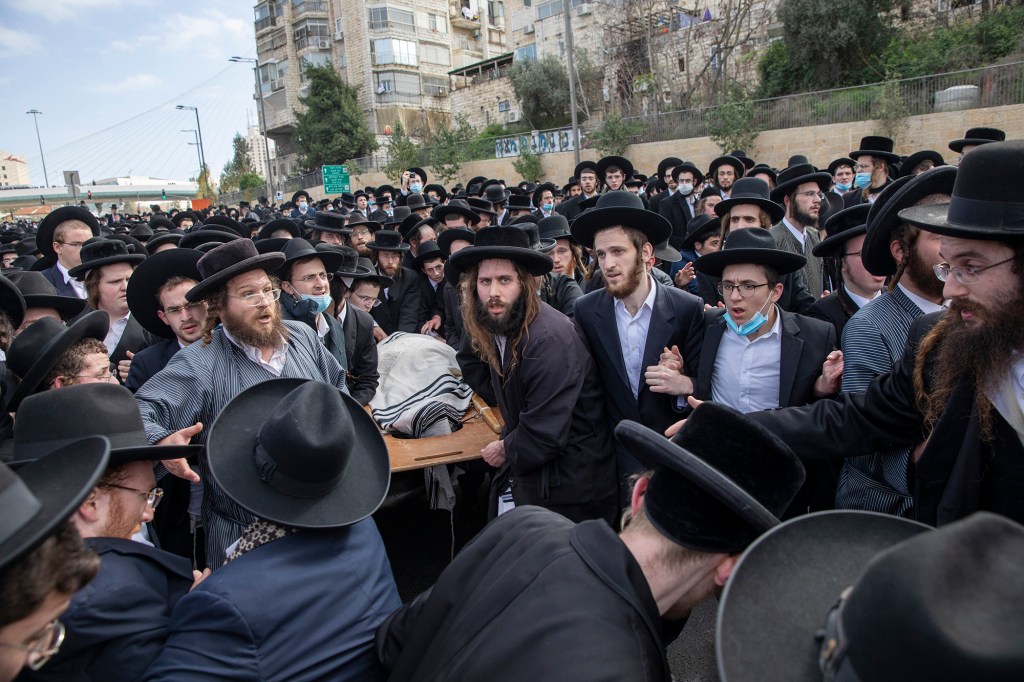 Health experts say it could take several weeks for the vaccination campaign to have an effect on infection and hospitalization rates. The Israeli Cabinet was meeting Sunday and expected to extend a nationwide lockdown for another week. The government imposed the movement restrictions and closure of schools and non-essential businesses last month in an effort to clamp down on Israel’s runaway pandemic.

A disproportionate number of Israel’s coronavirus cases are within the country’s ultra-Orthodox minority. The strictly religious community, which makes up around 11% of Israel’s 9.2 million people, has been accounting for about 40% of the new cases.

Many ultra-Orthodox sects have kept schools, seminaries and synagogues open, and held mass weddings and funerals in violation of lockdown restrictions that have closed schools and many businesses in other parts of the country. Recent weeks have seen violent clashes between members of the ultra-Orthodox community flouting the rules and police officers trying to enforce them.

Ultra-Orthodox leaders say they have been unfairly singled out and argue the country’s secular public does not understand the importance of public prayers and religious studies in their community. They claim the scofflaws are a small part of their diverse community, and blame crowded living conditions for the outbreak.

Netanyahu has long relied on ultra-Orthodox parties for support, and critics say he has refused to antagonize his allies ahead of critical elections. Without ultra-Orthodox support, it will be extremely difficult for Netanyahu to cobble together a governing coalition — especially as he seeks immunity from an ongoing corruption trial.

But there are signs that this alliance could become a liability due to widespread public anger over ultra-Orthodox behavior during the pandemic. A poll last week indicated that over 60% of Israelis do not want ultra-Orthodox parties to serve in the next coalition.

Gideon Saar, a right-wing Israeli politician challenging Netanyahu in the elections, criticized the prime minister on Twitter, saying “the pictures from Jerusalem prove that Netanyahu has given up on enforcing the law for political reasons. This won’t happen in a government headed by me. There will be one law for all and it will be enforced.”

Another challenger, Yair Lapid, leader of a centrist party appealing to middle class secular voters, said in a speech in parliament that he had nothing against the ultra-Orthodox or their parties.

“I have a big problem with someone who thinks the law doesn’t apply to him,” he said. “The law is for everyone.”