Thomas Welsby Clark was born in the Brisbane suburb of New Farm, Queensland, on January 28, 1920; the third son of James Colin Clark and Marion Clark (née Welsby). His father was a grazier who was the eldest son of James Clark, an orphan, who, as the result of hard work and wise business investments in the pearling industry, had risen from abject poverty to become one of the richest men in Queensland. Thomas’ mother was descended from Scottish immigrants who had arrived in Victoria in the early 1850s.

Thomas Clark was educated at Slade School in Warwick, Queensland, but also spent time working on the family properties and their Brisbane oyster leases.

He was an excellent swimmer and a keen yachtsman. Upon leaving school he became an accountant in Brisbane, and on March 14, 1939, he enlisted in the Militia (Army Reserve) as a private in the Queensland Cameron Highlanders.

He was discharged from the Militia on August 19, 1940, to join the Royal Australian Navy. His elder brothers, Arthur and James, served in the army and air force respectively.

Mr Clark joined the Royal Australian Naval Reserve on August 23, 1940, and was posted to the anti-submarine training school HMAS Rushcutter in Sydney, where he completed training as a submarine detector. 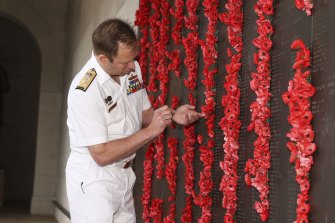 Chief of Navy Vice-Admiral Michael Noonan places a poppy next to Able Seaman Thomas Welsby Clark’s name on the Roll of Honour at the Australian War Memorial on Friday.Credit:Alex Ellinghausen

On completion of his training, he served as an ordinary seaman in the anti-submarine training ship HMAS St Giles, based in Sydney Harbour, Mr Clark was promoted to acting Able Seaman on July 15, 1941, before completing a short period of training at HMAS Cerberus, the RAN’s premier training depot in Victoria, during July-August 1941.

On completion of that training, he joined the light cruiser HMAS Sydney (II) in August 1941. At that time, Sydney was tasked with conducting patrol and escort work on the Australia station, escorting such famous troopships as the Queen Mary and Queen Elizabeth in southern Australian waters throughout early September.

In late September 1941, the cruiser began operating off the West Australian coast, escorting convoys from Fremantle to the Sunda Strait in the Netherlands East Indies (Indonesia). There, Sydney would hand the convoy over to other Allied warships that would continue escorting the ships to Singapore. 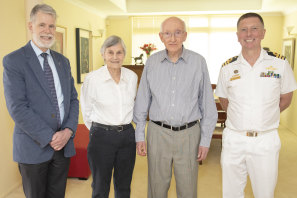 On November 11, 1941, Sydney departed Fremantle escorting the troopship Zealandia, carrying troops of the 8th Division, 2nd Australian Imperial Force. On November 17, in the vicinity of the Sunda Strait, Sydney handed the troopship escort over to the cruiser HMS Durban before commencing the return voyage to Fremantle.

On the afternoon of November 19, 1941, Sydney sighted what she took to be a merchant ship about 200 kilometres west of Shark Bay, Western Australia, and closed in to investigate.

Sydney signalled the ship to identify itself, continuing to approach the mysterious vessel as she did so. The merchant ship stated it was the Dutch steamer Straat Malakka, but in fact she was the disguised and heavily armed German merchant raider Kormoran, which had already sunk 10 unsuspecting merchant ships in the Indian Ocean and taken another as a prize.

Sydney drew closer, rescinding her advantage of superior gunnery and range, demanding that the ship identify itself with its allotted secret call sign.

The captain of the German raider, Theodor Detmers, did not have the response and, with Sydney close on his starboard beam, he ordered the immediate hoisting of the German battle ensign and opened fire.

In the battle that followed both ships were mortally damaged. Sydney, torpedoed and ablaze, later sank with the loss of all 645 members of her ship’s company.

The crew of Kormoran abandoned ship before the raider was scuttled, using demolition charges that set off her cargo of more than 300 sea mines. Approximately three-quarters of her crew survived to become prisoners of war.

When Sydney failed to return to Fremantle, a major search for the ship began; but only a single empty life-raft, known as a Carley float (now on display at the Australian War Memorial), and an inflated RAN lifejacket were found.

Several months later, on February 6, 1942, another badly damaged Carley float containing the body of a naval rating wearing blue overalls was washed up on Christmas Island in the Indian Ocean.

The body was recovered, and, with no means of identifying the individual, his remains were buried in an unmarked grave in the European cemetery there.

In the post-war years, speculation that the body came from HMAS Sydney (II) increased, leading to a number of official inquiries being held that were to confirm the assumption. Efforts to relocate the body, with a view to attempting to identify it, followed, and in 2006 the remains of the unknown sailor were exhumed by a specialist ADF team.

The remains were carefully examined and biometric data and DNA samples were recorded before the sailor was reinterred, with full naval honours, in the Commonwealth War Graves Commission cemetery in Geraldton – the closest war cemetery to where Sydney was lost.

In the years since 2006, a committed team of researchers continued working hard to identify the unknown sailor and DNA testing revealed his identity beyond doubt this year.

On November 19, 2021, at a special ceremony held at the Australian War Memorial marking the 80th anniversary of Sydney’s sinking, Chief of Navy Vice-Admiral Michael Noonan announced that it was Able Seaman Thomas Welsby Clark, who had finally completed his long voyage home.