A ROGUE umbrella locked an entire company out of its office for two days after getting itself jammed in the door.

The bizarre problem Mike Ponticelli and his colleagues faced as they tried to get in prompted an avalanche of suggestions – some apparently ingenious, others involving brute force. 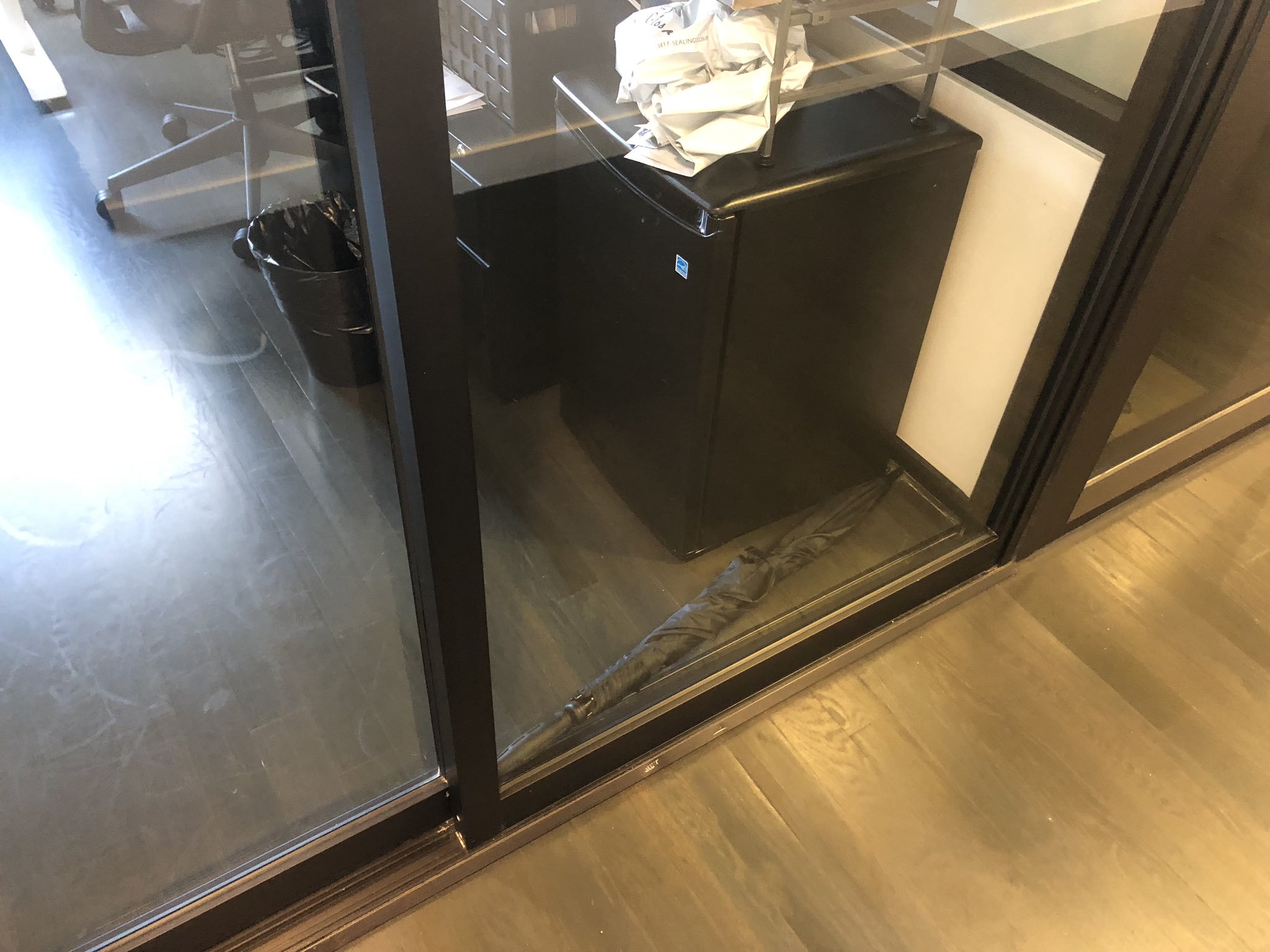 The umbrella had been propped up against the wall, close to the entry door but it fell sometime after Mike left for the weekend on Friday.

The hilarious episode went viral after his friend shared the story on Twitter this week, prompting users to weigh in with solutions.

Mr Ponticelli told Vice, him and his three colleagues at the Washington DC firm had a "does not compute moment”.
"We just stood there for 30 minutes," he said.

“Sometimes you’ve got a problem and you see a clear solution.

"Sometimes you see a problem, and you know the solution will be messy, but there’s still a solution.

“There was no solution here. The seal was perfect. An umbrella had the door locked perfectly.”

In the meantime Mike's friend, who posted the initial tweet, was bombarded with solutions, many of which involved smashing in the glass.

The four co-workers, however, persisted in repeatedly jiggling the door in an attempt to dislodge the brolly.

“It was geometrically perfect, how the umbrella had fallen. The door would not budge

“The windows on the outside overlook a roof on a nearby office, but there was no latch. They’re just big panes of glass.”

Eventually, they contacted WeWork, who the office is rented from, and they provided an alternative space while problem was investigated.

In a thousand years, you’d not be able to replicate this

The following morning, Mr Ponticelli took an arsenal of extra tools with him, including “a screwdriver, a pair of pliers, extra coat hangers” – but nothing worked.

WeWork then hired an engineer who “specialised in getting in closed offices” to fix the situation, but they also failed.

That person suggested they hire a “super engineer” – although they wouldn’t be available for days and would cost a small fortune.

Eventually, on Tuesday night, someone cracked and cut a small hole in the ceiling and used a piece of wire to move the umbrella out of the way.

Mr Ponticelli  said he had no idea how the umbrella had managed to fall in just the right way.

“My theory is that the maintenance crew, who came in on Friday evening … something happened that caused the umbrella to fall in such a way that could never be replicated in 1000 years,” he said.

It was a sentiment he echoed in another interview with BuzzFeed News.

“In a thousand years, you’d not be able to replicate this,” he said.

“The umbrella has turned our office into, essentially, an unmanned panic room with no way in.”