Home » World News » ‘They just left us’: Migrants say Greece forced them onto boats and sent them adrift

Aegean Sea: Wet and shaken, women and children were pulled aboard the Turkish patrol boat first, then the men and more children.

A seven-year-old girl shivered uncontrollably as she was set down on the deck. An older woman retched into a plastic bag.

They were two of 20 asylum-seekers from Afghanistan who had been drifting in the dark, abandoned in rudderless rafts for four hours before the Turkish coast guard reached them. 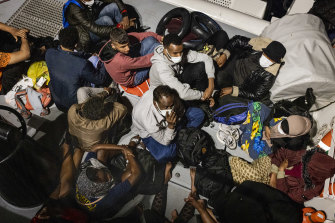 Migrants are rescued by the Turkish coast guard near Dikili, Turkey, in the Aegean Sea. Frustrated by more than a year of picking up people they say Greece has illegally pushed out, Turkish officials invited journalists to witness rescues firsthand. Credit:Ivor Prickett/The New York Times

Just hours earlier they had been resting in a forest on the Greek island of Lesbos when they were caught by Greek police officers who confiscated their documents, money and mobile phones and ferried them out to sea.

“They kicked us all, with their feet, even the children, women, men and everyone,” said Ashraf Salih, 21. “They did not say anything, they just left us.”

Turkish coast guard officials described it as a clear case — rarely witnessed by journalists — of the illegal pushbacks that have now become a regular feature of the dangerous game of cat and mouse between the two countries over thousands of migrants who continue to attempt the sea crossing from Turkey to the Greek islands as a way into Europe. 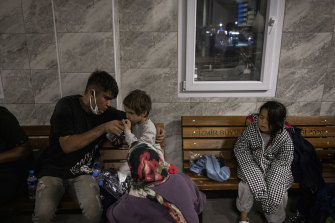 Since an agreement broke down last year, Turkey and Greece have been at loggerheads over how to deal with the flow of migrants along one of the most frequented routes used since the mass movement boomed in 2015.

Then, 1 million migrants, mostly Syrians fleeing the war in their country, led the surge into Europe. The flow is much reduced — 40,000 have arrived by sea into Europe so far this year — but it is now dominated by Afghans, raising fears that the escalating conflict there and the withdrawal of Western troops could bring larger numbers.

For more than a year, Turkey has turned a blind eye to the migrants, allowing them to try the sea crossing to Greece. That country has resorted to expelling migrants forcibly, disabling their boats and pushing them back to Turkey when they are caught at sea.

Increasingly, Greece is removing asylum-seekers who have reached its islands, forcing them into life rafts and towing them into Turkish waters, as the compassion many Greeks had shown during earlier waves of migration has given way to anger and exhaustion.

Frustrated after more than a year of picking up migrants left by their Greek counterparts, the Turkish coast guard invited journalists recently on a patrol boat to witness what they said were the Greek violations. 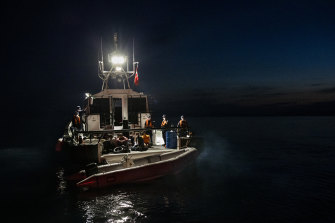 The tactic of pushbacks has been denounced by refugee organisations and European officials as a violation of international law and fundamental European values. The Greek government denies it has pushed back migrants, while insisting on its right to protect its borders.

“Numerous cases have been investigated, including by the European Union,” Notis Mitarachi, minister for migration and asylum in Greece, said last week, “and reports have found no evidence of any breach of EU fundamental rights”.

Philippe Leclerc, head of the United Nations refugee agency in Turkey, said his office had presented evidence, including “accounts of violence and family separations” to the Greek ombudsman, requesting the cases be investigated, without result.

The two countries are at an impasse, with Turkey demanding that Greece end the pushbacks first, and Greece demanding that Turkey first take back 1400 migrants whose asylum requests have been rejected, Leclerc said.

An Afghan teenager with an injured leg, Reyhan Ahmedi, 16, was picked up after six hours at sea alone after being expelled by Greece. He said he had fled his home in the town of Gereshk, in southern Afghanistan, as attacks from the Taliban escalated. When he got news that his home had been bombed and was unable to reach his parents, he decided to make a bid to reach Europe.

“I thought I should take myself away from Afghanistan and find a better future for myself,” he said. “I want to get an education.”