Home » World News » ‘The state is divided’: how debate about the lockdown turned ugly

But a few weeks ago, the 37-year-old restaurateur posted a fiery video on Facebook of Victorian Liberal MP Matthew Guy slamming the state government over its mishandling of the coronavirus pandemic. 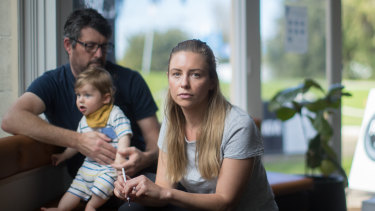 A close friend called the owner of Panda Blairgowrie an idiot and the pair are no longer speaking. The experience was so toxic Ms Johnston deleted the Facebook app from her phone.

“It has really turned people against each other,” she says.

“I understand that people will react differently. I have a business and a young child and this is going to affect me differently to someone with an elderly mother. The whole state is so divided.”

This polarisation has led to heated debate across Melbourne, and across the political spectrum, about the merits of lockdown, curfews and restrictions on leaving the home that look set to continue until at least October 26.

Anti-lockdown activists have clashed with police at protests across the city, online petitions calling for industries to reopen have gathered thousands of signatures and the Give Dan the Boot social media campaign has encouraged people to place a pair of boots outside their homes to express their dissatisfaction with the Premier. 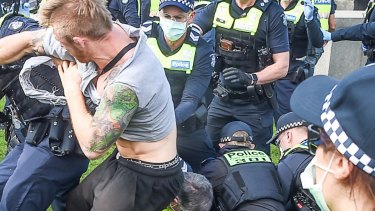 Protesters fighting with police when they were being arrested.Credit:Justin McManus

Frustrated Victorians are also taking their grievances to court, with retrenched workers launching a class action lawsuit against the state government this week, claiming its botched hotel quarantine program led to thousands of job losses.

In a separate Supreme Court writ, the Premier faces a challenge to his decision to impose a curfew across Melbourne by restaurateur and Liberal Party member Michelle Loielo, who argues the restriction is disproportionate, unreasonable and violates human rights.

While there’s no doubt most people are sick of lockdown, and those opposed to it are becoming more vocal, it’s difficult to measure whether there is growing sentiment against coronavirus restrictions.

And the situation is nuanced: many Melburnians are broadly supportive of the lockdown but opposed to aspects of it, such as the ban on travelling more than 5 kilometres from home.

When Roy Morgan started surveying Victorians about their attitudes towards COVID-19 restrictions in August it expected to detect strong opposition.

But Michele Levine, the chief executive of the market research company, was surprised to discover most people supported the strict rules.

But over time, as the number of coronavirus cases have dropped significantly, more Victorians are calling for restrictions to be eased.

One of the most contentious restrictions is the ban on visiting immediate family at their homes, with Roy Morgan research released this week showing that 55 per cent of people think Melburnians should now be afforded this simple joy.

And about half of those surveyed believe Melburnians should be allowed to travel more than 5 kilometers from their home.

Could the warmer weather also be behind this shift? Ms Levine believes so.

“When this began in August the weather was awful. It was cold, it was grey. A lot of people were saying, ‘what the hell, I may as well be at home’,” she says.

“Every time there is beautiful sunshine you can feel that people want to get out again. They want to go to the park, they want to walk their dog. They're taking advantage of as much as they're allowed to do, and probably a little bit more.”

Paul Strangio, an associate professor of politics at Monash University says it’s unclear whether opposition to the lockdown and state government is on the rise.

He points to a series of recent and conflicting polls: Liberal polling that shows a massive swing against Labor across five key seats, polling by the Labor-linked RedBridge group which shows Labor would retain power if an election was held today and Roy Morgan research which found 70 per cent of people approve of the state government’s handling of the pandemic .

“On both sides we have been hearing some strident voices,” Dr Strangio says. “There are those viscerally against the lockdown, demanding everything be opened up, and those who support the government’s position.”

These loud voices are not necessarily representative of mainstream opinion, which Dr Strangio suspects is much more measured.

He says even if there is growing dissatisfaction with lockdown, he expects that will dissipate once restrictions ease.

“It’s conceivable that the angst will be replaced by a sense of collective relief and a quiet satisfaction, pride and solidarity that we have emerged pretty well intact from the second wave.”

The Andrews government is no doubt banking on this and hoping for some political dividend once restrictions are eased.

According to Dr Strangio, support for the government will then hinge on how well it steers Victoria through the mammoth task of repairing the economy.

But Opposition leader Michael O’Brien doesn’t think the public will be so forgiving.

“Expert modellers do not support Victoria’s harsh lockdowns, nor do leading epidemiologists. Even the Chief Health Officer admitted he had no input into the curfew,” he says.

“The emotional and economic damage that Daniel Andrews’ lockdowns are causing Victorians is incalculable.”

Concerns about the restrictions are not just coming from the conservative side of politics.

Barrister, refugee advocate and former Greens candidate Julian Burnside, who is also president of Liberty Victoria, believes the use of CCTV and other surveillance devices to monitor compliance with the lockdown breaches Victorians' human rights.

“They’re a serious intrusion on human rights and very difficult to justify," Mr Burnside told The Age last week after it was revealed that mobile surveillance units were being used in parks and other public spaces to remotely monitor citizens during stage four restrictions.

"Imagine if each one of those cameras was a plain-clothes policeman, people would be up in arms."

While Ms Johnston and her husband supported the first lockdown – in fact they wanted it to be stricter – they are not fans of the second one which has crippled small businesses across the state.

“We wanted them to do it once, and do it right,” she explains.

The pair have had to close, reopen and then close their Blairgowrie restaurant as restrictions have been eased and then tightened. They’re sick of pivoting. They’ve transitioned into a takeaway business, a supplier of grazing boards and they will soon launch takeaway picnics for customers who are longing for the day when they can dine in again.

Along the way, the Johnstons have had to throw out a lot of food, stand down staff, sell their car and tap into their superannuation to make ends meet. They’ve had to juggle all this while caring for a 9-month-old baby.

“I’ve tried not to come out and take sides but I’m upset about how hotel quarantine security was managed. We have all played a high price.”

She also doesn’t understand why Mornington Peninsula is under the same strict lockdowns as Melbourne when there are just two active coronavirus cases in the community.

“It’s been frustrating. There is no real threat down here.”

Breanna Wright, a research fellow at Monash University who completed a PhD in psychology and epidemiology, suspects Victorians are not as polarised about the lockdown as they may seem.

She says a vocal minority who are opposed to the restrictions have been very effective at making their voices heard. Their opinions have been amplified by social media at a time when everyone is at home, spending more time online.

She points out that very few people have attended the anti-lockdown protests.

“They're not large,” she says. ‘ We don't have half of Melbourne out on the streets protesting.”

As coronavirus restrictions drag into their seventh month, convincing people to stay the course is becoming an increasingly challenging task for the government and health officials.

Victorian Health Minister Jenny Mikakos acknowledges that Victorians have made huge sacrifices and says the government has been focused on driving down cases, saving lives and safely reopening.

“Thanks to the incredible efforts of Victorians the strategy is working, with numbers going down and the more we can keep these efforts up, the faster we can continue on the road to recovery,” she says.

North Fitzroy resident Phoebe Kerr says debate about the lockdown has grown increasingly toxic and there is a real divide.

“You have the conspiracy theorists, then the people who hate Daniel Andrews and then people like me,” she says. “I don’t have the energy to be invested in hating people or coming up with conspiracies.”

Ms Kerr is one of many Victorians who does not like life under lockdown, but supports it.

The public health worker says it’s been a struggle entertaining her active four-year-old in an apartment and she misses her mum, who lives alone on the Mornington Peninsula. But she thinks these sacrifices will be worth it.

Every morning, the 34-year-old visits the Victorian Department of Health and Human Services website and breathes a sigh of relief if there has been a decline in active cases in her postcode.

“You want to know that it is working,” she says. “It gives you a sense that there’s light at the end of the tunnel.”