It’s the Queen of carts! With help from new royal carriage, Her Majesty was back in full bloom at Chelsea Flower Show, writes ROBERT HARDMAN

Having travelled by almost every conceivable means of transport during her record-breaking reign – including Concorde, carriages, steam trains, elephants and a South Pacific war canoe – the Queen can now add one more to the list.

Last night, she made her official British debut in a golf cart in order to attend one of her favourite events: The Chelsea Flower Show.

A little over half a century after devising the walkabout – when she first plunged in to a crowd of strangers during a 1970 visit to Wellington, New Zealand – Her Majesty has now invented the cartabout. And I am sure we’ll be seeing a lot more of it. 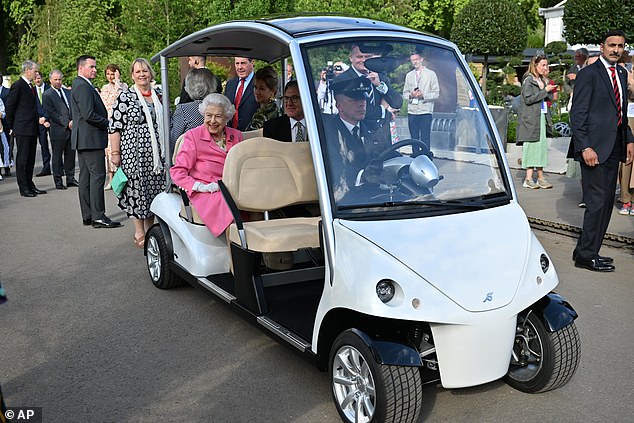 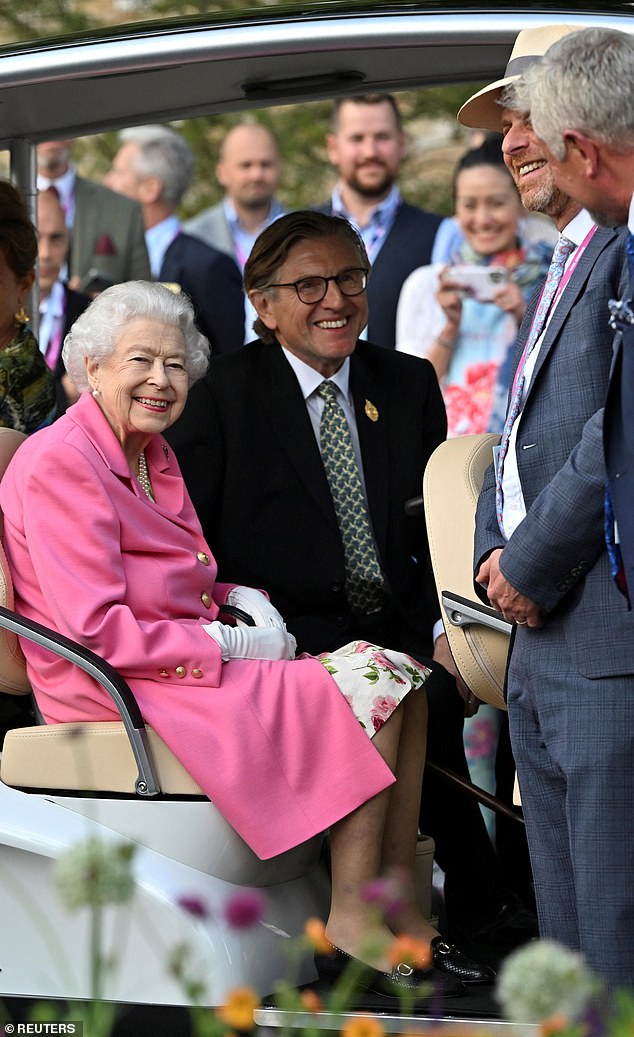 The Queen looked cheery as she enjoyed a tour around the 2022 Chelsea Flower Show. Pictured next to the President of the Royal Horticultural Society, Keith Weed 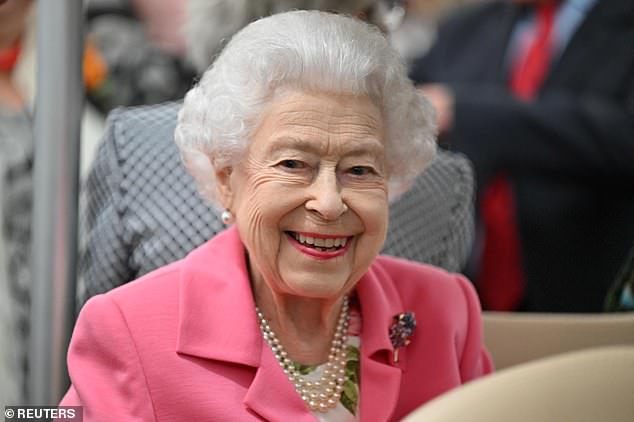 There are few non-state occasions in the national calendar which have enjoyed the sort of devotion the Queen has displayed towards the Chelsea Flower Show throughout her life. She has been coming here almost every year since she was a child.

And she plainly loves it as much as ever, judging by her enthusiasm last night as, dressed in luminous pink, she inspected displays dedicated to mental health, lifeboats, community cohesion – and herself.

There, in the Grand Marquee, she was introduced to a giant silhouette of her own head, made by royal florist Simon Lycett and comprised of 70 hand-thrown flower pots, each planted with lily of the valley (her favourite). She appeared delighted when Mr Lycett informed her the plants would be going from here to a selection of schools.

There were plenty of other familiar faces, too. When top grower Raymond Evison was introduced as ‘the King of the Clematis’, the Queen of the United Kingdom replied: ‘I know he is!’ And at the garden for the charity Mind, she paused for a long discussion on the soothing qualities of dark poppies.

It has been three years since the Queen last attended the show, memorably inspecting the Duchess of Cambridge’s child-friendly ‘Back To Nature’ garden in 2019. Back then, she was on foot. 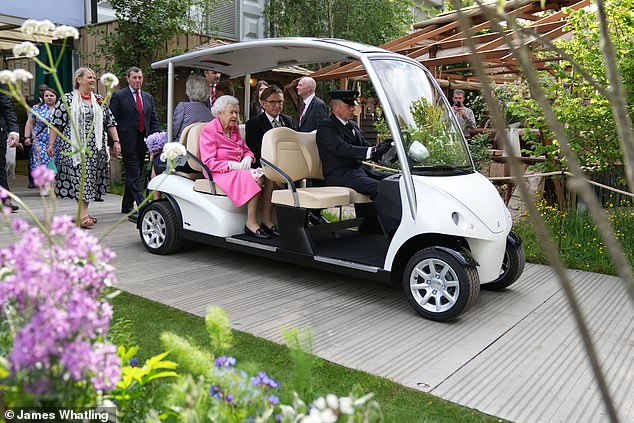 Pre-pandemic, pre-widowhood, pre-‘episodic mobility problems’, that occasion might now feel like another age. Yet none of Chelsea’s perennial appeal – its life-affirming sense of renewal and its sweet-scented promise of summer just around the corner – has been lost.

That’s why the Queen has always been thrilled to be here.

The first fixture of the time-honoured British ‘Season’, it serves as the harbinger of so many beloved summer traditions – Trooping the Colour, Royal Ascot, Goodwood and the rest.

Spread over 23 acres, the showground is a demanding walk for any visitor. The main marquee alone can accommodate 500 London buses.

So there was no way, in her 97th year, that she could have enjoyed all this on foot. Here was the perfect opportunity to unveil the latest addition to the vehicle fleet in the Royal Mews. Prices for the six-seater model start at £20,000.

Driven by a royal chauffeur, in peaked cap and gloves, the six-seat buggy kept a stately walking pace indoors and out. The Queen was accompanied by the Royal Horticultural Society president, Keith Weed, while her lady-in-waiting, Jennifer Gordon-Lennox, and Mrs Weed sat at the back. At every turn, the Queen seemed to have an observation or a point to make. 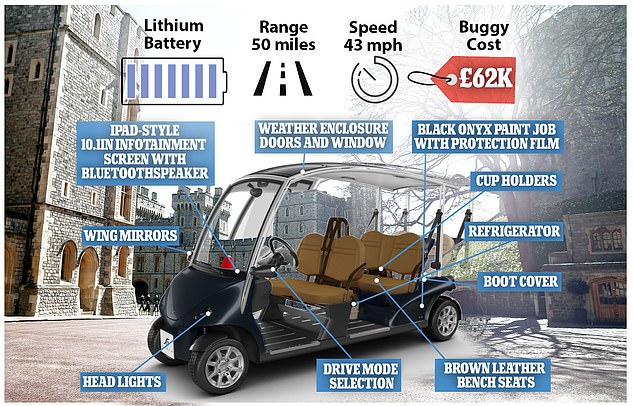 Her Majesty the Queen had a £62,000 Daria batter-powered golf buggy delivered to help her with recent mobility issues that comes complete with hi-tech specs including a fridge and entertainment screen

Despite the well-rehearsed route, there were plenty of unscheduled stops too, including one to admire the display of lilies by Cheshire florist, Loraine Hart. We can now expect to see the buggy at a number of events over the summer. Though they have been used for some time for private pottering on the royal estates, it is understood that Her Majesty had reservations about using one for an official engagement, especially for one as high profile as this.

If she is to turn up at an event, she, very understandably, wishes to look the part. The late Queen Mother voiced similar concerns before she was coaxed into a golf buggy in her late nineties in order to attend race meetings.

It was the Queen herself who had the brainwave which won her mother round: Why not paint the thing in her mother’s racing colours? That plan was a triumph. Last night, the Queen’s buggy carried no livery, since I understand that it is on loan.

Should it become a permanent fixture, some royal colours and a coat of arms may by in order. In surroundings as colourful as this, however, there was no need.

After the monarch missed this month’s State Opening of Parliament, there were concerns that she might find some of her major Platinum Jubilee events too much of an ordeal.

Those worries receded six days later when she appeared at the Royal Windsor Horse Show’s equestrian pageant and then sat through more than two hours of open-air evening entertainment.

Two days later, she was at Paddington Station to unveil the new Elizabeth Line, radiating enthusiasm and good spirits in bright spring yellow. Last night’s scenes would certainly seem to bode very well for the Jubilee proper less than a fortnight hence.

They also reflect the Queen’s genuine, life-long love of gardens. Her knowledge and expertise run deep. Her father, King George VI, was an obsessive gardener.

The late Queen Mother received the Royal Horticultural Society’s Victoria Medal of Honour, its highest award, as did her brother, Sir David Bowes-Lyon, a former RHS president (making them the only brother and sister to win the accolade). The broadcaster Wesley Kerr, a member of the RHS Council, has written an authoritative study of the Queen’s love of horticulture in the society’s latest magazine. ‘How we garden is an expression of national and individual culture,’ he writes.

In 2013, garden gnomes were admitted to the Chelsea Flower Show for the first time. The Queen duly gave them the royal seal of approval and made a point of inspecting a gnomic display.

At this year’s show, the Grand Marquee includes a photographic display of the Queen’s visits over the years. The contrast between an award-winning garden in her Coronation Year, 1953, and today could hardly be more pronounced.

Back then, it was all manicured lawns and immaculate displays of roses and foxgloves. Today, it is about wild flowers, sustainability, mindfulness, biodiversity – and bees. Many of this year’s gardens have a strong bee theme, given the catastrophic fall in numbers in recent years. 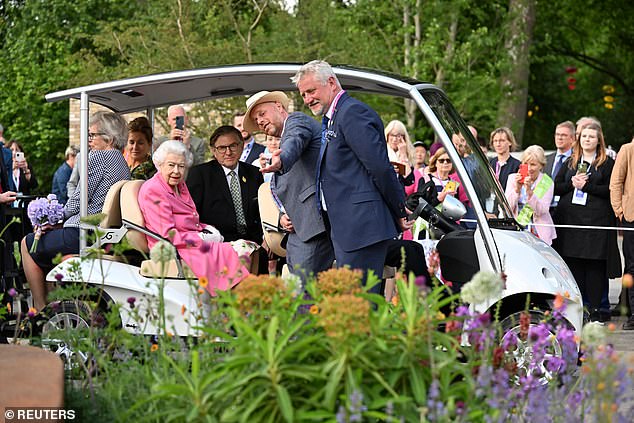 It was good to see the Bumblebee Conservation Trust making its debut. ‘If you can only plant two things, plant nasturtiums and sunflowers,’ said their education officer, Andy Benson. Nor was the Queen the only great British gardener to be found among the shrubbery yesterday. Earlier, I found Dame Joanna Lumley joining Chelsea Pensioners and young garden designers admiring the Body Shop Garden.

‘There’s nothing like Chelsea to restore your belief in gardening and to make you want to get the secateurs out,’ explained Dame Joanna, while happily accommodating an endless succession of selfie-hunters.

At the Blue Peter Garden, a reunion of presenters past and present was taking place to mark a campaign to help children appreciate the joy of compost.

Of all the exhibitors, few were paying more attention to the weather than London garden designers The Plantman & Co.

Their display consists of hundreds of plants encased in 120 blocks of ice, each weighing 19 stone. The idea is to highlight the threat of climate change, though it could be awkward if they highlight it too soon. They must be the only people not hoping for sunshine this week as Chelsea bounces back to life after its three-year hiatus.

With 140,000 visitors expected by the weekend, could there be a more potent sign that our great British summer is back than the sight of Chelsea en fete in the company of our Jubilee Queen?