The significance of historical events usually fades with time but the current hostility between Beijing and the West has given a dangerous new edge to the anniversary of the Tiananmen Square massacre.

As the Herald has reported in the past few days, it was 30 years ago on Tuesday that the Chinese Communist Party  called People's Liberation Army tanks on to the streets of the national capital and dispersed crowds of pro-democracy protesters and students with reckless, senseless brutality, killing several thousand.

The Chinese government has suppressed all mention of the events of  June 4, 1989 inside China and indeed it is likely to act with the same evil purpose if any dissidents are brave enough to say what needs to be said today. Protesters in the democratic haven of Hong Kong will hold their usual candlelight vigil to mark the day but border officials have blocked a former student leader flying from the US to join the protest. On the mainland, anyone who proclaims the truth that Chinese soldiers fired on their own unarmed citizens faces jail or worse. 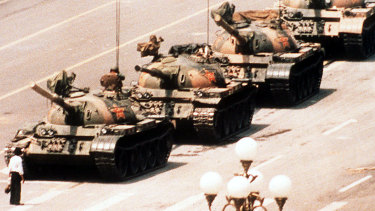 A lone protester clutching a shopping bag prevents a line of tanks from reaching Tiananmen Square on June 4, 1989.Credit:AAP

The telling of this big historical lie has become ever more brazen under leader-for-life Xi Jinping who has taken a callous attitude towards human rights, especially for the hundreds of thousands of members of the Muslim Uighur ethnic minority detained in re-education camps in western China.

Prime Minister Scott Morrison has apparently ducked a chance to use the anniversary to send a strong message about Australia's human rights concerns.

Three Chinese warships and 700 Chinese service men have been allowed to dock in Sydney Harbour and will spend the next few days in Australia. It is a rather uncomfortable coincidence but Mr Morrison said it should not be "over-analysed."

It underlines the dilemma for Australia in raising Tiananmen and other human rights abuses at a time when the US and China have entered a period of intense strategic and economic rivalry which could catch Australia in its crossfire.

Australia must find the right diplomatic formula for defending human rights while not adding to the atmosphere of conflict. Part of the answer will be to send a message that shows due respect for China as a civilisation and has due regard to our own often imperfect history.

Many Chinese are justly proud of their success in modernising in the last 30 years and they resent criticism of the Chinese regime which ignores that record of achievement.

Chinese defence minister Wei Funghe was unusually blunt at a security summit in Singapore this week in saying that China regarded the brutality of Tiananmen as the only way to avoid the anarchy of the glasnost period in the Soviet Union. "The government was decisive in stopping the turbulence," Mr Wei said.

It is a sign that China refuses to accept any Western interference in its domestic policies or indeed any Western claim to global moral leadership.

When they hear criticism of Tiananmen, Chinese are aware, because they are constantly being told by their own state media, that the West has blind spots about its own history too, including Australia's treatment of its first peoples and the false claims that justified the US invasion of Iraq.

Lecturing China about the past is a delicate game. In speaking of Tiananmen, the best approach must be to appeal to the desire for human dignity which is just as much a part of China's history as of any country. It is in China's interests to have a free discussion of its past and to imagine a future where soldiers are no longer needed to defend the regime against its people.