Teenager, 18, wanted for stealing a car was found hiding inside a giant TEDDY BEAR by police – when they spotted the toy breathing

A car thief who ripped open a teddy bear’s bottom and climbed inside it to try and avoid arrest has been mocked online after police caught him when they saw the giant toy ‘breathing’.

Disqualified driver Joshua Dobson, 18, from Rochdale, had been evading Greater Manchester Police’s neighbourhood team after stealing a car and failing to pay for fuel in May.

As cops searched for the teenager, they eventually entered a property and were stunned to be greeted by a ‘breathing’ teddy bear – before realising Joshua had ripped open the cuddly toy’s bum and hidden inside its stuffing. 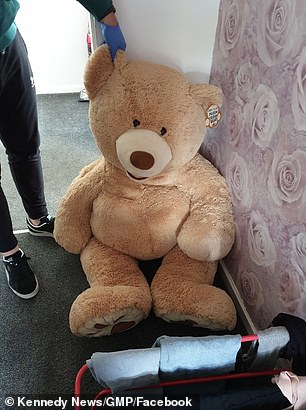 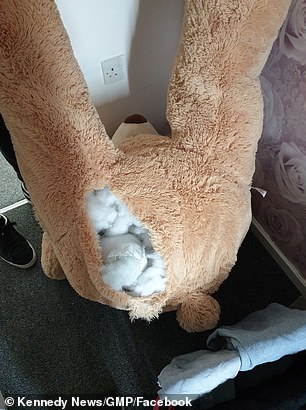 UnBEARlievable: Joshua Dobson, 18, hid inside a giant teddy while on the run from police

Dobson was sentenced for theft of a motor vehicle, driving while disqualified, and making off from a petrol station without payment last week and will spend nine months behind bars.

GMP Rochdale wrote on their social media: ‘A wanted car thief who tried using a teddy bear to hide from our neighbourhood cops out looking for him last month has been put behind bars for nine months.

‘When we went to arrest him, our officers noticed a large bear breathing in the address before finding Dobson hidden inside.

‘He’s now stuffed behind bars after being sentenced last week for theft of a motor vehicle, driving while disqualified, and making off from a petrol station without payment.

‘Hopefully he has a bearable time inside…’

After details of the unusual incident were posted on social media, Dobson’s failed disguise was mocked by Facebook users who branded the fugitive’s quick-thinking ‘hilarious’. 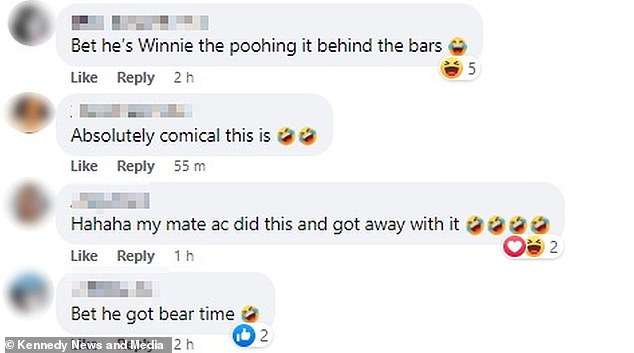 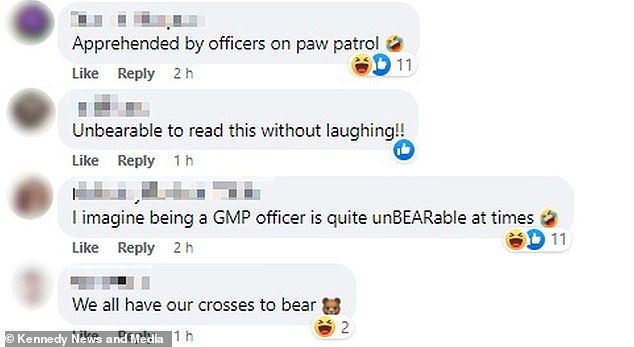 ‘Unbearable to read without laughing’: Dozens of social media users found the story of the failed escape plan hilarious

One user said: ‘I bet the officers couldn’t ‘bearlieve’ it when they found him.’

Another Facebook user said: ‘I imagine being a GMP officer is quite unBEARable at times.’

A fellow Mancunian said: ‘He will only get the bear essentials in jail.’

One commenter said: ‘Apprehended by officers on paw patrol.’ 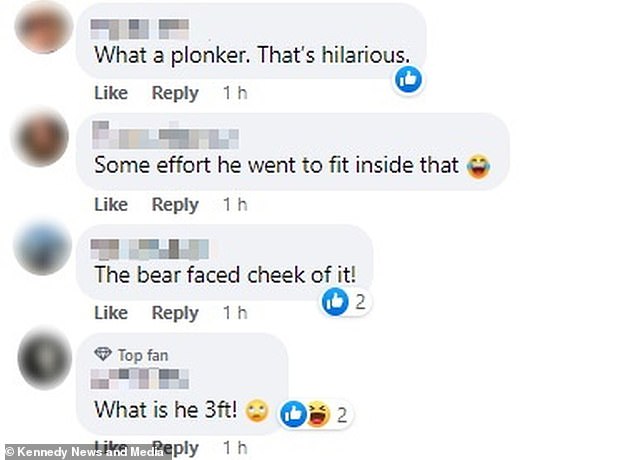 Another pointed out that while the teddy is large it is nowhere near human-sized.

‘What is he 3ft!’ they said about Dobson.

Another local said: ‘What a plonker. That’s hilarious.’

Meanwhile another disbelieving person said they had to ‘check the date’ to make sure the post was not an April Fools prank by the police.