When classes start this fall at Texas Christian University, the school will no longer have freshman students, according to a report.

That’s because university officials have decided that the term “freshman” wasn’t gender inclusive enough, FOX 4 of Dallas-Fort Worth reported.

So going forward, any TCU student with 24 or fewer credit hours will be known as a “first-year student,” the report said.

The change drew mixed reactions on the school’s Fort Worth campus, according to FOX 4.

“Really, we can’t even be called freshmen anymore,” student Mackenzie Carey told the station. “I mean, I know people are offended by literally everything nowadays, but that one’s pushing it, in my book.”

“I know people are offended by literally everything nowadays, but that one’s pushing it, in my book.”

“There are a lot of words that have ‘men’ in them,” Mekhail said. “I don’t know, there’s a lot more TCU can do, to do inclusion, than just change the word ‘freshman.’” 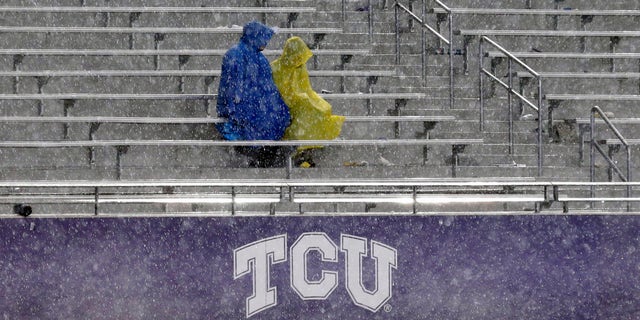 Fans sit in the stands during a thunder delay in the second quarter of an NCAA college football game between Texas and TCU, Saturday, Oct. 26, 2013, in Fort Worth, Texas. (Associated Press)

“’First year,’ I think medical school,” Gresel said. “So if I’m going to call someone a ‘first year,’ I’m thinking you’re a first-year resident or something like that.”

“My heart sinks,” Davis wrote on Twitter. “I want good things for all our proud local colleges. This is pure stupidity from #TCU.”

TCU junior Matt Gill, part of the university’s team for implementing the change, explained the reasoning behind the move.

The new term “first-year student” will also refer to transferees, military veterans and others who aren’t arriving on campus straight from high school, he added.

“Language is important,” Gill added. “The more we are able to start referring to people on equal terms, the better off I think we will be in terms of reaching actual progress.”

Other universities, including Yale, Penn State and the University of North Carolina, have made similar language changes, FOX 4 reported.