Stockholm: Sweden's government failed to sufficiently protect the elderly in care homes from COVID-19 and is ultimately responsible for the pandemic's effects in the country, according to a stinging official report released on Tuesday.

The Scandinavian country has stood out among European and other nations for the way it has handled the pandemic, for long not mandating lockdowns like others but relying instead on citizens’ sense of civic duty. 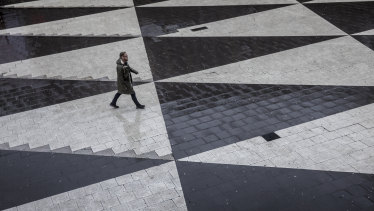 A man crosses an unusually empty square of Sergels Torg in central Stockholm. This time of the year, the square should be full of Christmas stalls and shoppers.Credit:Getty Images

But an independent commission that looked into the government’s handling of the crisis said elderly care had major structural shortcomings and authorities proved unprepared and ill-equipped to meet the pandemic. Nearly half the country's COVID-19 deaths have been in aged care homes.

The head of the commission, Mats Melin, said the blame for structural shortcomings in the healthcare system could be placed on several authorities and organisations.

While Swedish authorities reacted to the pandemic by advising people to practise social distancing, most schools, bars and restaurants have been kept open.

Yet, the country of just over 10 million has recorded 341,029 confirmed infections and 7667 virus-related deaths, a death toll much higher than in neighbours Norway, Finland or Denmark.

Despite Sweden having one of the highest per capita COVID-19 death rates in the world, Prime Minister Stefan Lofven’s government and Chief Epidemiologist Anders Tegnell have defended the controversial coronavirus strategy as sustainable in the long-term. They have, however, admitted failures in their efforts to protect the elderly and nursing home residents.

“In the other Nordic countries … care for the elderly seems to have been more in focus in the authorities’ early pandemic measures,” the report said.

Sweden's strategy had also been expected to spare the country a resurgence of the disease, but earlier on Tuesday Lofven said health officials had misjudged the impact of the latest wave.

“I think that most people in the profession didn’t see such a wave in front of them, they talked about different clusters,” Lofven told the Swedish Aftonbladet newspaper.

A rapid increase in new coronavirus infections that strained the Swedish healthcare system. The virus has spread quickly among medical staff, pushing the government to back more restrictions, including a nationwide ban on the sale of alcohol in bars and restaurants after 10pm.

It has also imposed its tightest virus restrictions to date by banning public gatherings of more than eight people.

Almost all regional hospitals were now struggling with a shortage of healthcare staff, according to a report on Swedish Radio.

University hospitals across the country, except for Norrland University Hospital, did not have enough employees to look after the sickest COVID patients, the broadcaster said.

Last week, Stockholm's health-care system almost caved under the pressure of the pandemic as its intensive care capacity hit 99 per cent.