A statue of Christopher Columbus in Chicago was removed under cover of darkness today after drawing chaotic protests in a wave of violence which has led to Donald Trump’s deployment of federal forces in the city.

Hours after news spread that mayor Lori Lightfoot had sanctioned the statue’s removal, crews in Grant Park used a large crane to hoist the monument from its pedestal in the early hours of this morning.

The statue, seen by many as a symbol of oppression, had already been covered in plastic wrap to protect it from vandals and was at the center of violent scenes last Friday – while a second statue in Little Italy has also gone.

Columbus statues have come under attack across the United States during the George Floyd protests, with one decapitated in Boston and others removed or toppled in Houston, Richmond and Baltimore among others.

Trump announced on Wednesday that federal agents would be sent to Chicago after last week’s violence was followed by 12 fatal shootings over the weekend.

The president’s intervention in Chicago was bitterly opposed by Lightfoot who said it would lead to a ‘wave of opposition’ amid anger over the federal crackdown in Portland, Oregon.

Trump threatened to send up to 60,000 federal troops on to the streets of America in an interview with Sean Hannity on Thursday night. 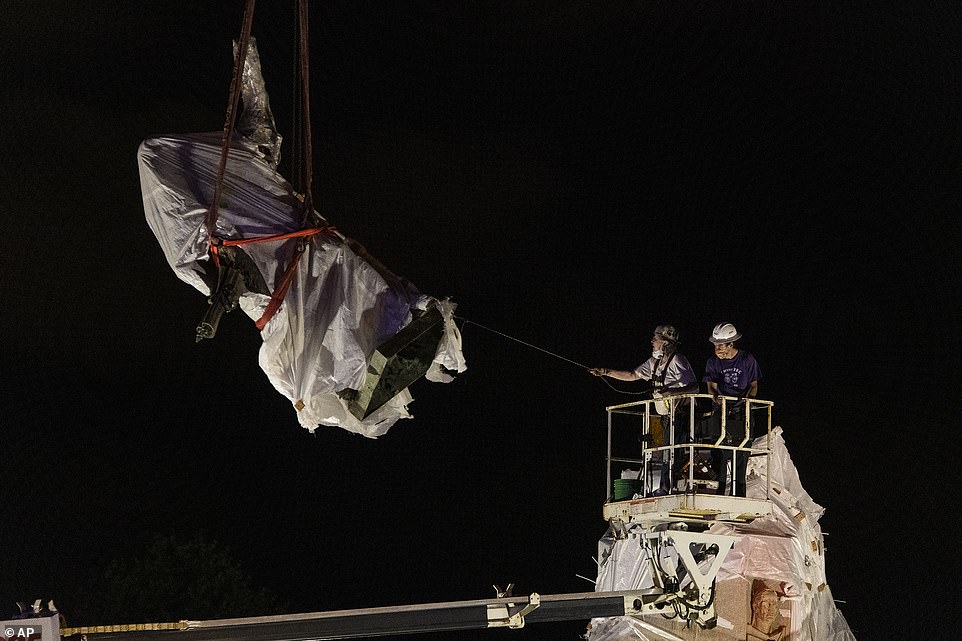 Removal: Chicago’s controversial statue of Christopher Columbus is hoisted away by a crane in the early hours of this morning, watched by a municipal crew who helped to remove it from Grant Park overnight 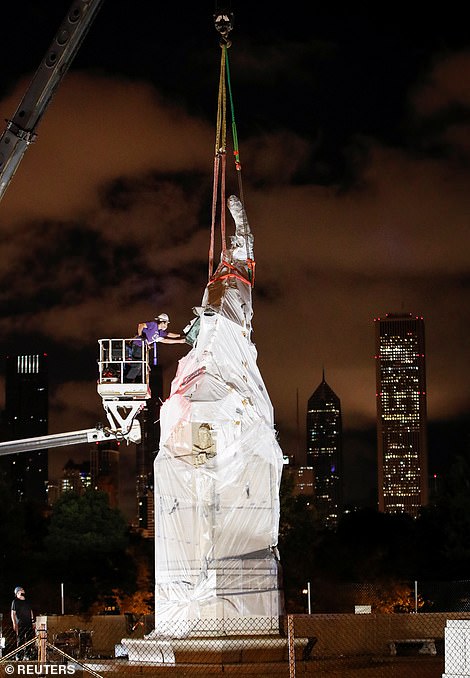 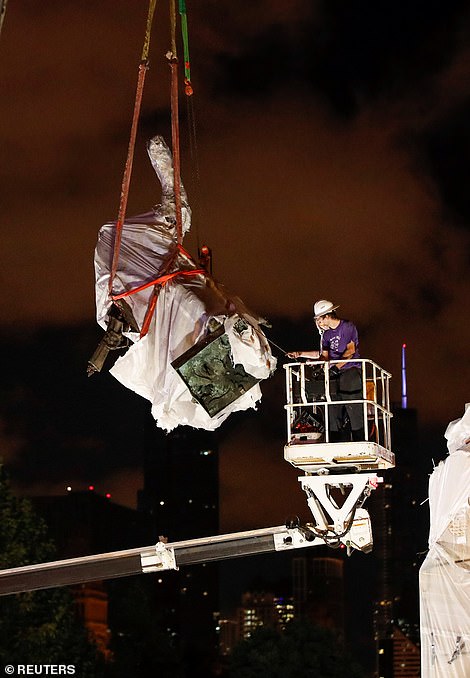 Under cover of darkness: Hours after news spread that mayor Lori Lightfoot had sanctioned the statue’s removal, crews used a large crane to remove the monument from its pedestal overnight 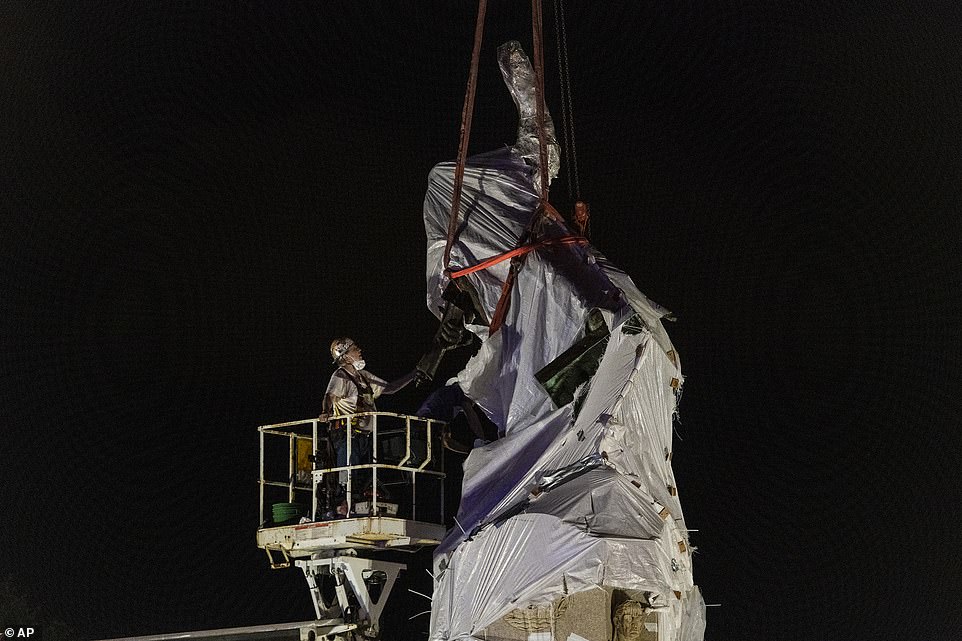 Toppled: City crews inspect the straps that are around the Christopher Columbus statue in Grant Park as they begin to remove it following violent protests over the monument 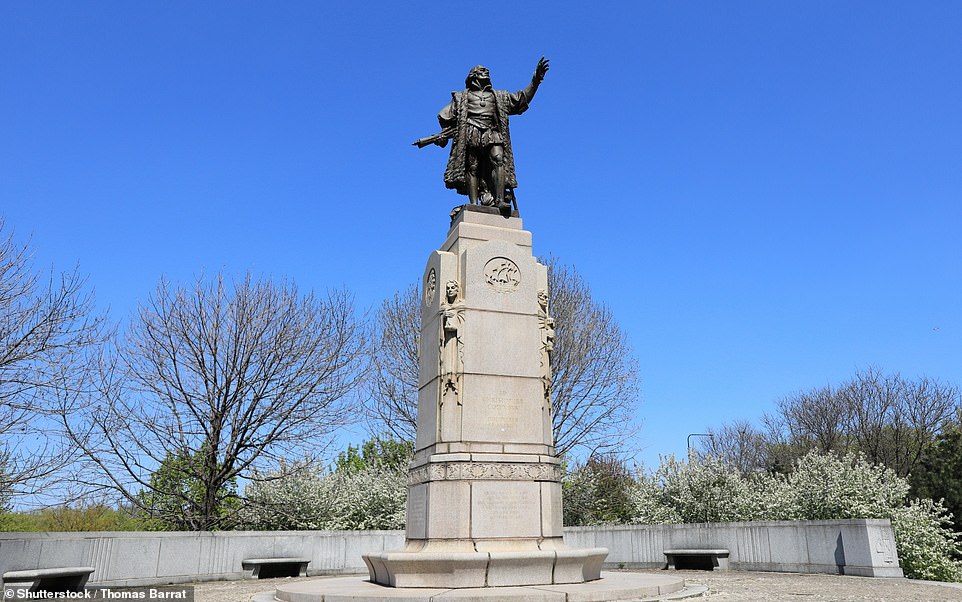 No more: The Columbus statue in Grant Park, pictured as it looked in May 2019, is the latest monument to the Italian explorer to come down during the George Floyd protests across the United States

The statue was removed in front of a small cheering crowd in the early hours of Friday while passing cars honked as the monument was winched to the ground.

It was driven away on the back of a truck after coming down at around 3am, but it was unclear where the monument would be taken.

Reports had emerged on Thursday night that Lightfoot had authorized the statue’s removal after previously opposing the move.

Protesters had already gathered outside the Chicago mayor’s house Thursday night to demand she defund the police and turf Trump’s federal agents out of the city.

More than 2,000 protesters blocked an intersection outside Mayor Lightfoot’s home Thursday night, waving banners reading ‘Black Lives Matter’ and ‘No justice no peace’, while there was no sign of federal agents.

Chants turned from ‘f*** CPD’ to cheers of elation when someone announced over the microphone that the city is planning to take the controversial Columbus monuments down from Grant Park and Little Italy.

Sources said the mayor is looking to avoid a repeat of the clashes witnessed between cops and protesters last week, reported the Chicago Tribune.

However, there was outrage at the decision from Chicago’s Fraternal Order of Police president John Catanzara who slammed Lightfoot as a ‘coward’.

Steve Cortes, spokesman for pro-Trump Super PAC America First, called the mayor ‘feckless’ and accused her of giving in to ‘violent nihilists’.

Several Italian-American leaders in Chicago said the community was unhappy with the decision.

Gianni Pasquale of the Joint Civic Committee of Italian Americans blasted it a betrayal to the Italian-American community for many of whom Columbus is a symbolic figure.

‘The Italian American community feels betrayed. The Mayor’s office is giving into a vocal and destructive minority. This is not how the democratic process is supposed to work,’ he said.

Columbus’s arrival in the Americas in 1492 unleashed centuries of European colonisation, making him a symbol of conquest and violence to Native Americans.

One Columbus statue was beheaded in Boston last month while another was torn down and thrown in a lake in Richmond, while other cities have taken pre-emptive action to remove their statues like Chicago has done.

The empty pedestal in Richmond was spray-painted and covered with a sign saying ‘Columbus Represents Genocide’ after the statue was set on fire and taken down. 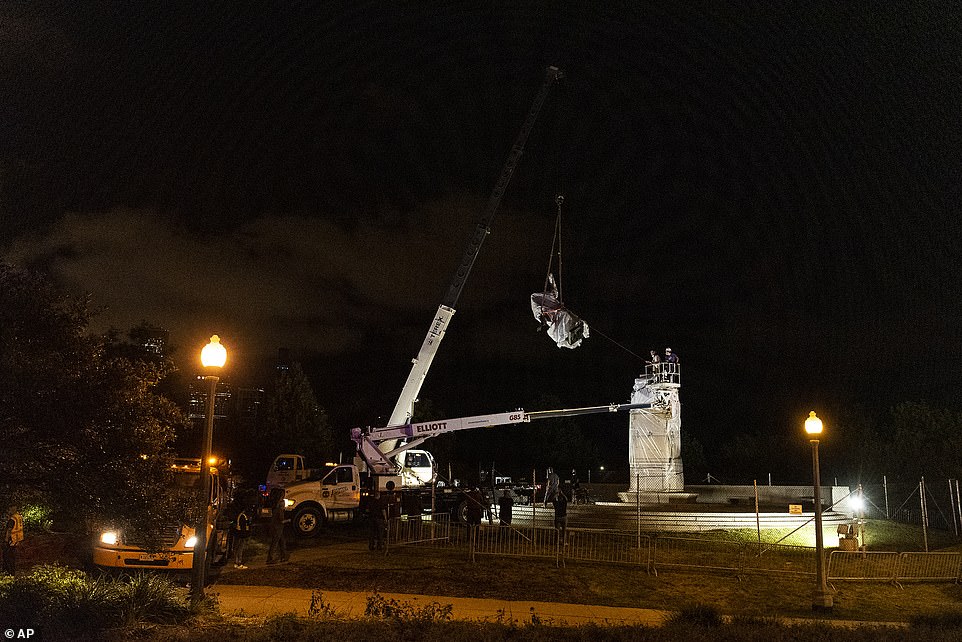 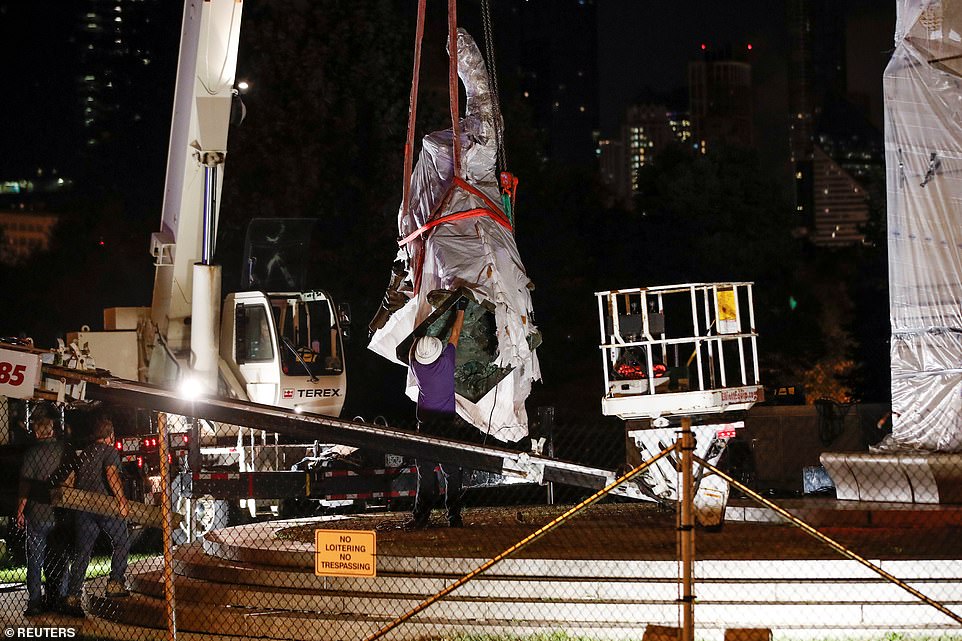 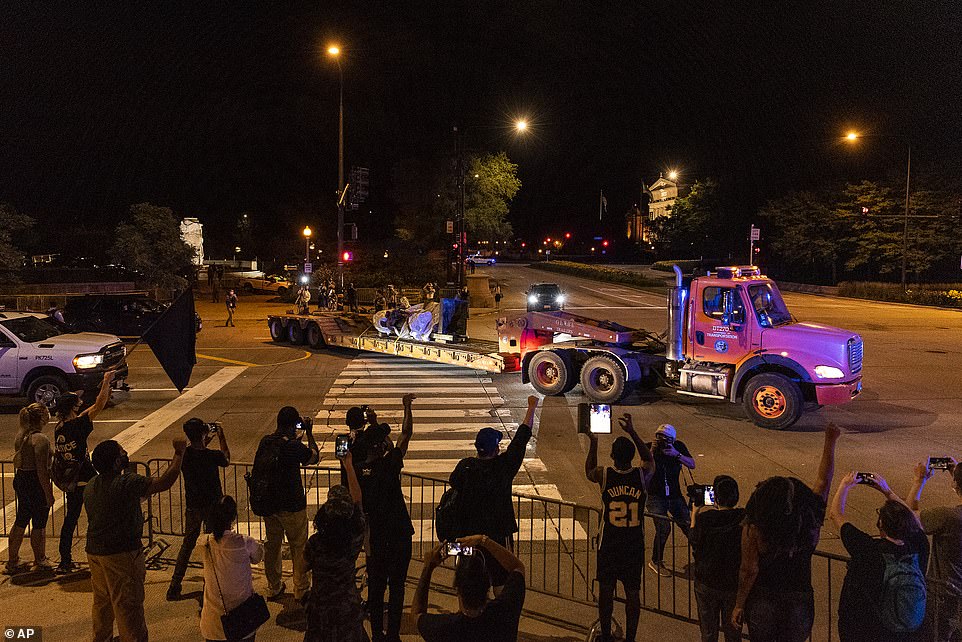 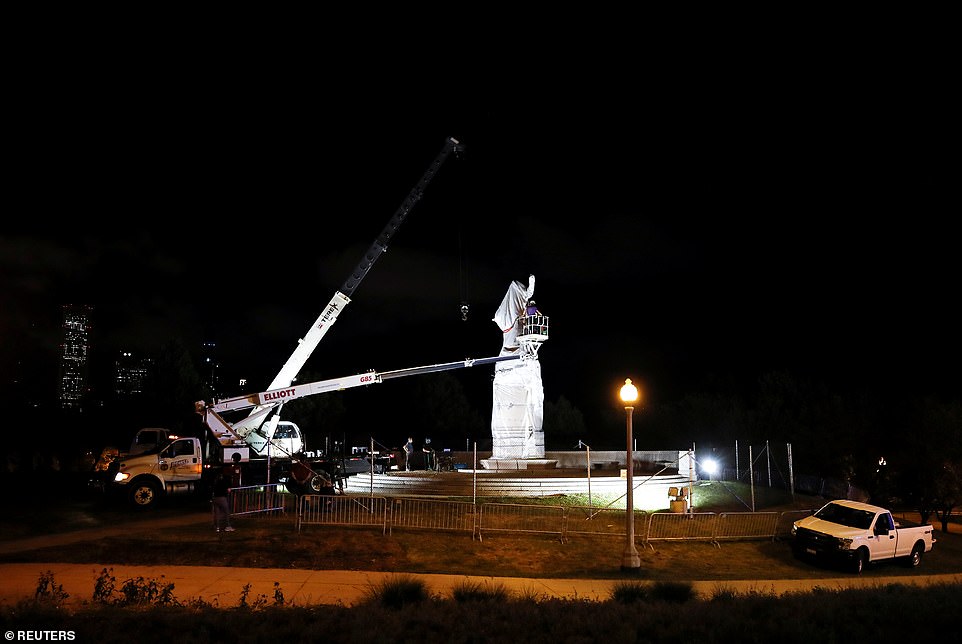 Crews used a large crane to remove the statue from its pedestal as a small crowd gathered to watch. Some lorries were nearby but it was not clear where the toppled statue would be taken 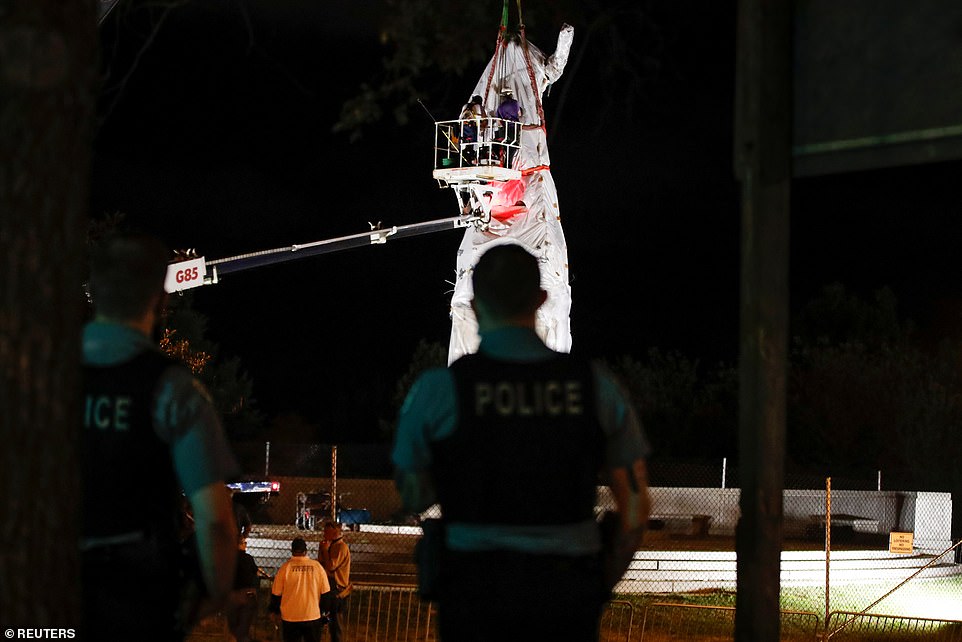 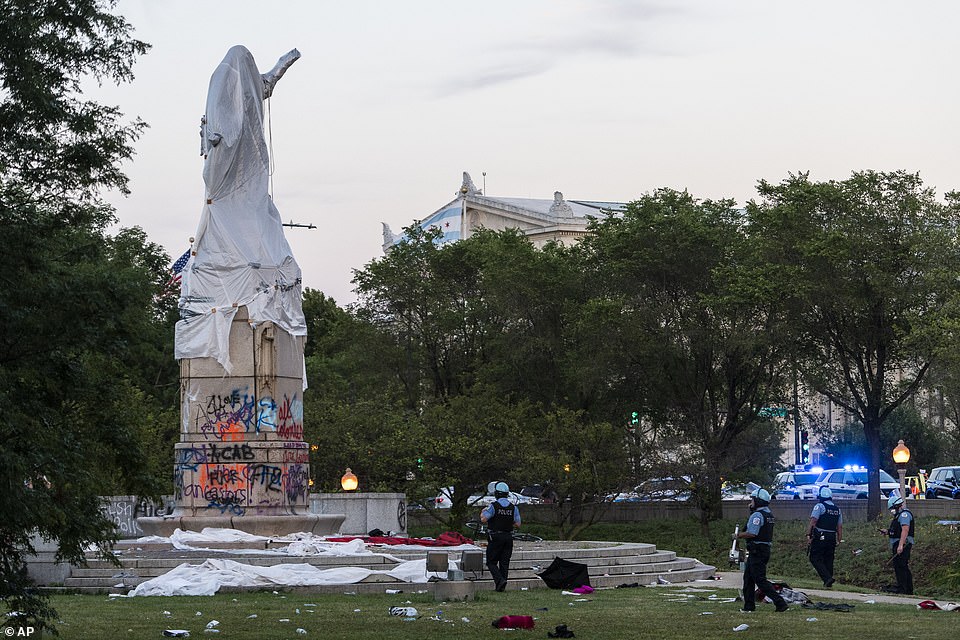 Police walk around at the site of the covered Columbus statue after protesters attempted to topple it Friday. Police were guarding the monument when they were hit with fireworks, authorities said 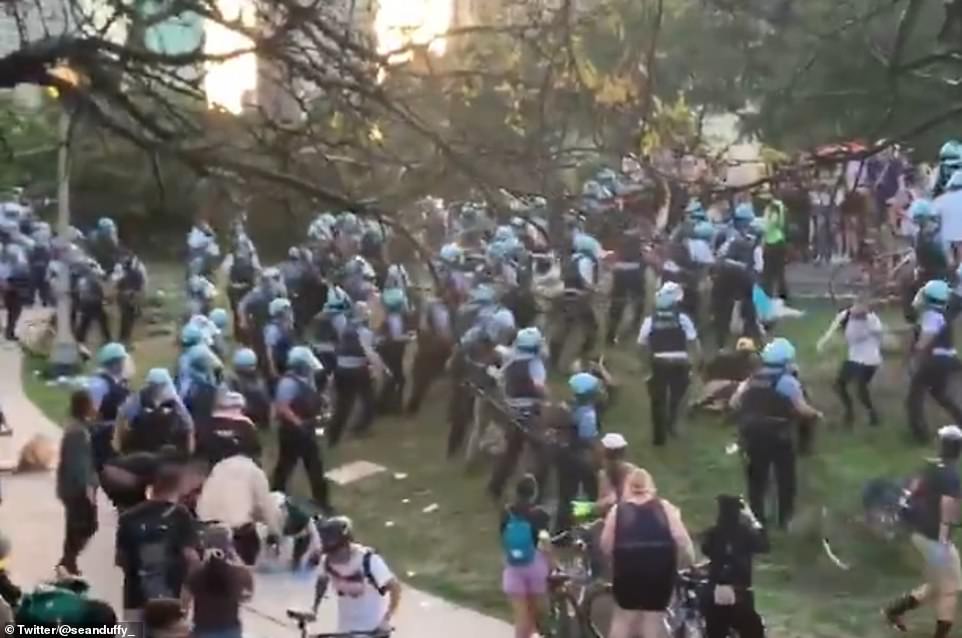 Hordes of police targeted protesters with pepper spray and wooden batons at last Friday’s protest. A view of police descending upon the monument and pushing demonstrators out above 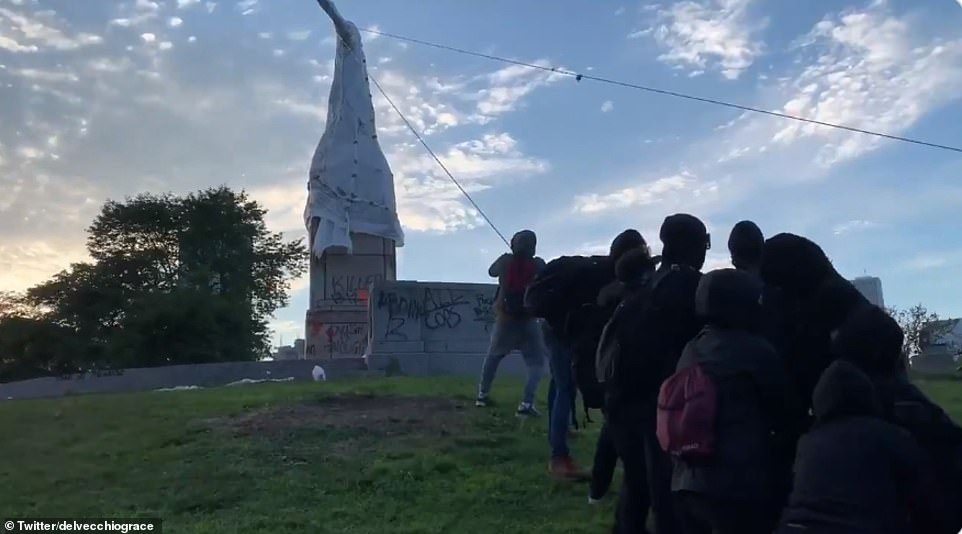 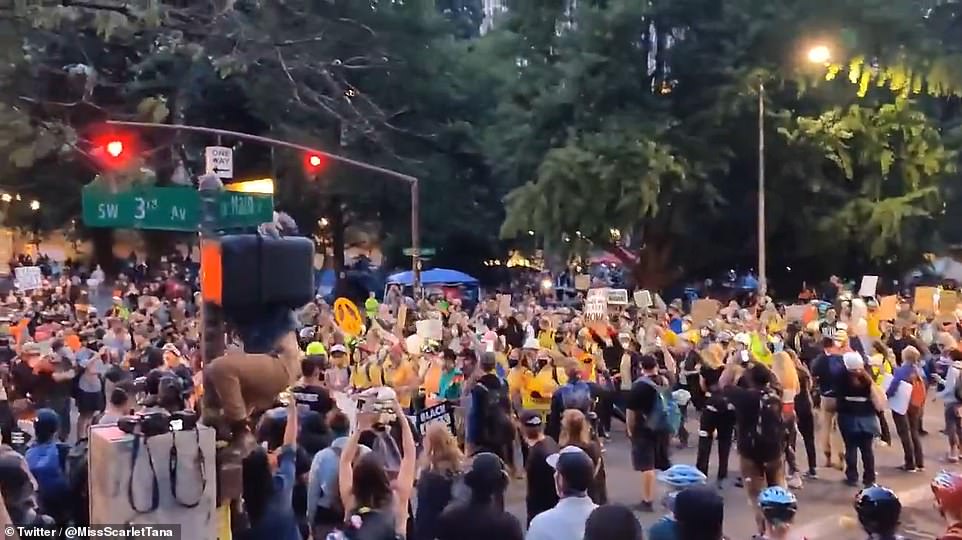 Last night, protesters gathered at the intersection near Lightfoot’s home before they learned the statue was to come down 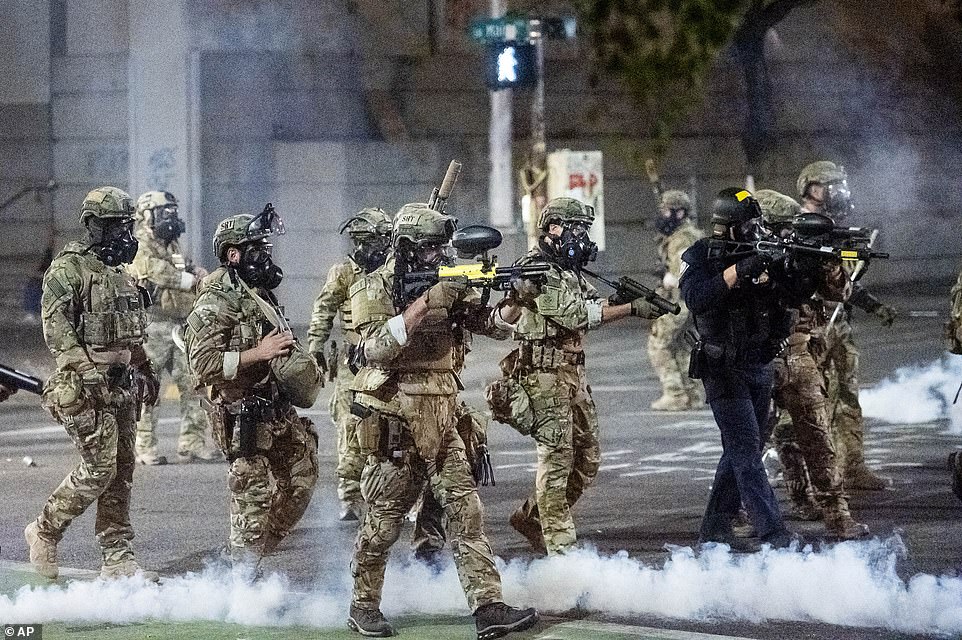 The statue of Columbus was at the center of last Friday’s violence when cops unleashed tear gas on protesters and several were left injured after they attempted to tear down the statue.

At least 20 complaints of police brutality were filed against officers following the night’s events, with one activist Miracle Boyd saying she had one of her teeth knocked out by a cop when they smacked her in the face.

On Tuesday in another neighborhood, a spray of bullets from a car passing a gang member’s funeral wounded 15 people and sent dozens running for their lives.

‘I’ve never seen things worse in this city than they are right now,’ said the Rev. Michael Pfleger, a Roman Catholic priest and longtime activist on the city’s South Side.

Trump announced on Wednesday that federal agents would be sent to Chicago, ignoring Lightfoot’s warnings that deploying paramilitary personnel would ‘spell disaster’ for the city.

‘What we do not need, and what will certainly make our community less safe is secret, federal agents deployed to Chicago,’ Lightfoot said in a letter to Trump.

‘Secret, federal agents who do not know Chicago, are unfamiliar with the unique circumstances of our neighborhoods and who would operate outside the established infrastructure of local law enforcement would not be effective, regardless of the number, and worse will foment a massive wave of opposition,’ Lightfoot said.

A collection of activist groups had filed a lawsuit on Wednesday, seeking to block federal agents from interfering in or policing protests.

However, Lightfoot sought to ease concerns that the surge will resemble the kind of scene that unfolded in Portland, where unidentified agents in camouflage have beaten unarmed protesters and stuffed some of them into unmarked vehicles.

Officials in Portland are also pushing back against the federal agents, with a judge granting a temporary restraining order Thursday, banning them from arresting legal observers and journalists at protests while protesters gathered outside the courthouse chanting ‘hands up please don’t shoot’.

The president warned he will ‘go into all of the cities’ and will put in 60,000 troops on the nation’s streets in an interview with Sean Hannity Thursday night.

‘And they’re strong. They’re tough and we can solve those problems so fast.’ 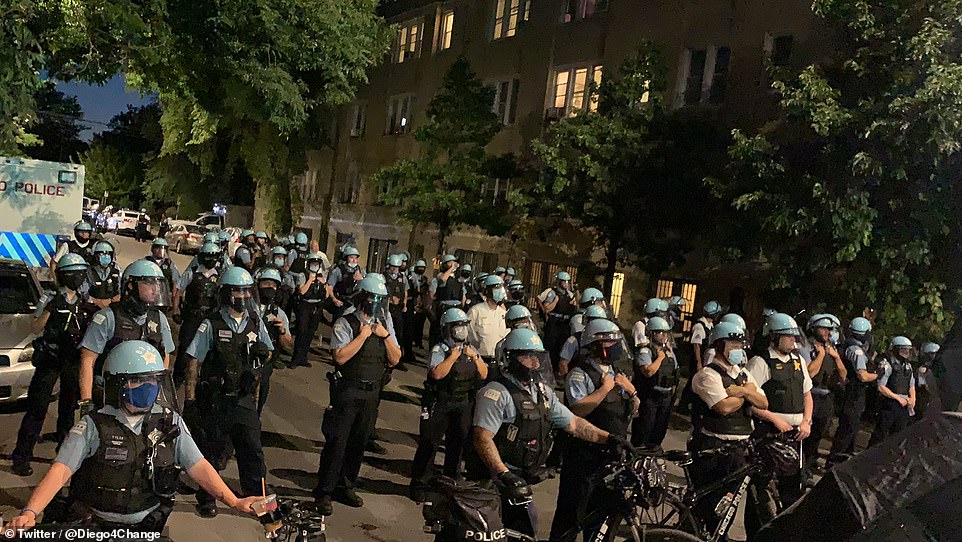 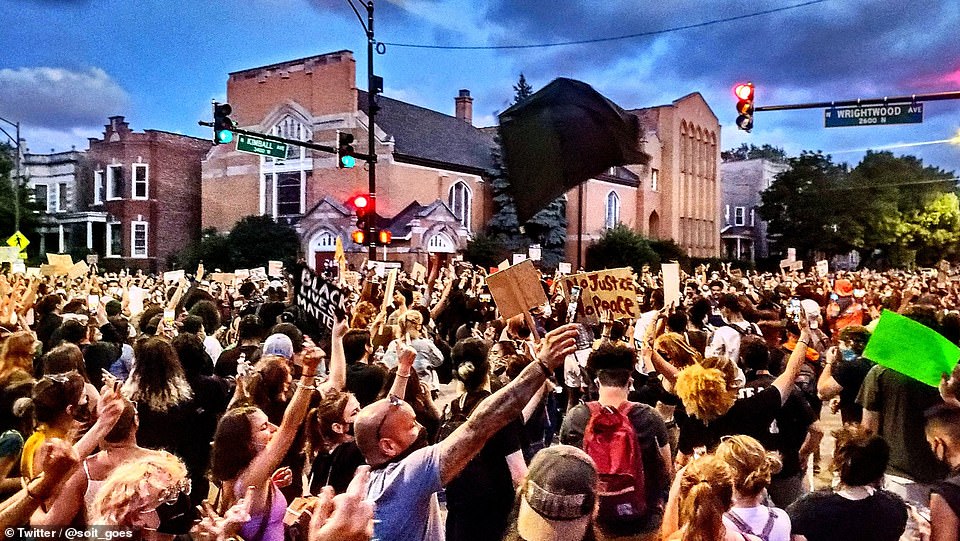 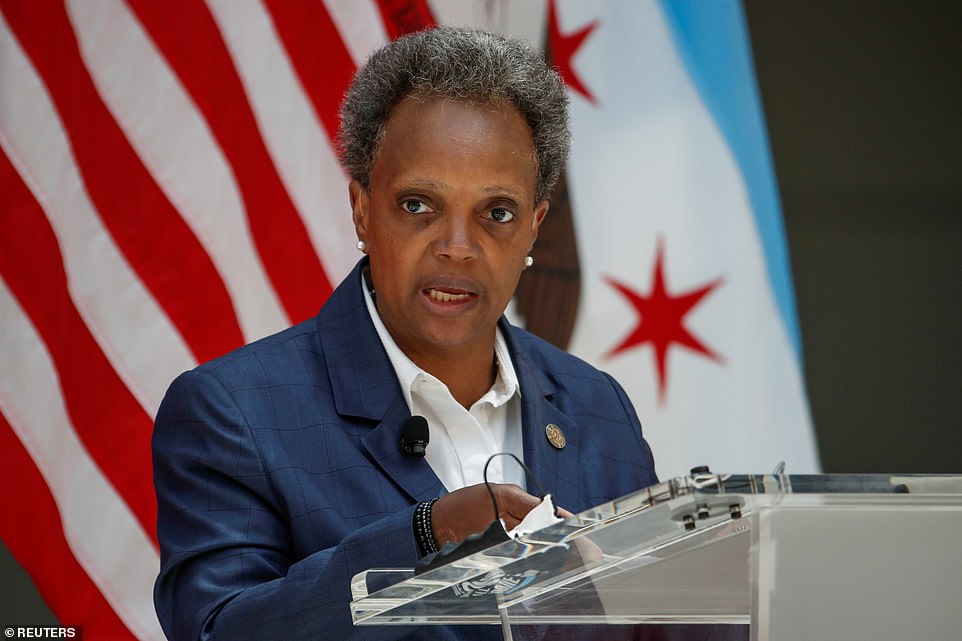 Lightfoot said she has been told the U.S. Attorney’s Office will supervise the additional agents supporting the Chicago offices of the FBI, the Drug Enforcement Agency and the Bureau of Alcohol, Tobacco, Firearms and Explosives.

But given the longstanding animosity between city officials and Trump, leaders from the mayor downwards worry that those promises will not hold up.

City officials will be on guard for any ‘steps out of line,’ particularly from agents with the Homeland Security Department, and they will not hesitate ‘to take the president to court,’ Lightfoot said.

Barr said the number of agents being deployed to Chicago is ‘comparable’ to the Kansas City surge of more than 200.

Trump, who is making law and order a central theme of his re-election campaign, painted Democrat-led cities as out of control and lashed out at the ‘radical left.

‘In recent weeks, there has been a radical movement to defend, dismantle and dissolve our police department,’ Trump said, blaming the movement for ‘a shocking explosion of shootings, killings, murders and heinous crimes of violence.’

Lightfoot has repeatedly said she does not support protesters’ calls to pull money from police in favor of social services.

Who was Christopher Columbus and why is he so divisive? 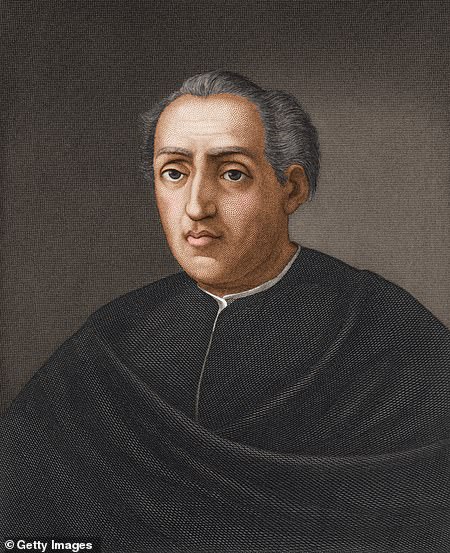 Christopher Columbus, (1451 – 1506) born in the Republic of Genoa (now Italy), was a 15th century navigator who began European incursions into the Americas. Native American activists believe the navigator was responsible for centuries of indigenous genocide.

Like Aristotle and others, Columbus believed that the world was round. He theorized that the distance between Spain’s Canary Islands and Japan was only around 2,300 miles (3,701 kilometers) and felt he could sail west to reach Asia for a new sought-out route for spices. It was really about 12,000 miles (19,321 kilometers). Columbus based his incorrect calculations on mystical texts, and ended up landing in the present-day Caribbean on Oct. 12, 1492.

Columbus convinced Spain’s Queen Isabella to fund his voyage by promising that the riches he’d collect would be used to finance a crusade to ‘reclaim’ Jerusalem for Christians. Instead, he found new foods, animals and indigenous people who, he wrote, were childlike and could be easily turned into slaves.

As indigenous populations revolted against brutal Spanish treatment, Columbus ordered a ruthless crackdown that included having dismembered bodies being paraded in public. Eventually, Columbus was arrested on mismanagement and brutality charges and died soon after.

Around 60 years after Columbus’ arrival, the Taino indigenous population of the Caribbean had been reduced from an estimated 250,000 people to a few hundred because of slavery and death from new diseases.

However for many Italian Americans the Italian explorer continues to be an important symbol in their heritage.

Millions of Italian immigrants traveled across the Atlantic to Ellis Island in New York to start a new life in America in the late 1880s to 1920s.

They faced xenophobia and prejudice, including one of the largest single mass lynchings in American history when 11 were murdered in 1891 in New Orleans.

The Italian explorer thereby became a cultural hero for Italian immigrants to hold on to during this time and Columbus Day parades began in the late 1800s.