President Sirisena fires chief of national intelligence for suggesting he had been forewarned about Easter bombings. 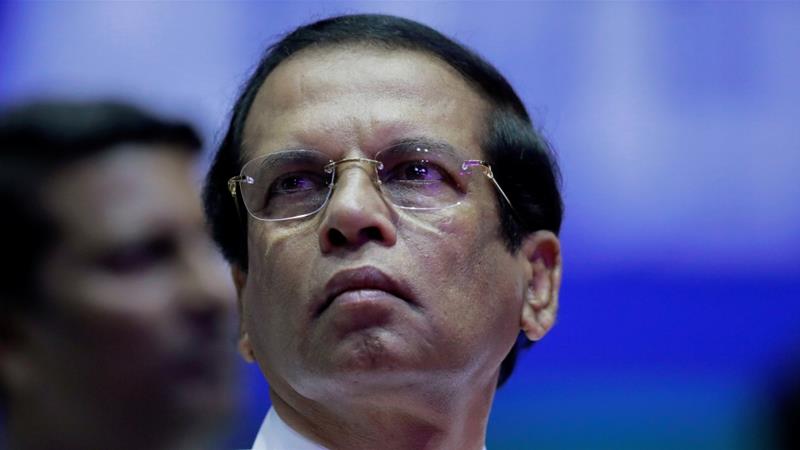 Sri Lanka’s President Maithripala Sirisena has fired the country’s chief of national intelligence after he suggested that the president was forewarned about the deadly Easter bombings.

Indian intelligence agents sent several warnings to Sri Lankan authorities that a plot was under way, but Sirisena and Prime Minister Ranil Wickremesinghe have both said they were not briefed about the warnings before the April 21 attacks, claimed by the Islamic State of Iraq and the Levant (ISIL, also known as ISIS).

A parliamentary select committee, led by allies of Sirisena’s rival Wickremesinghe, is investigating possible lapses that allowed the fighters to target hotels and churches, in which over 250 people were killed.

In his May 29 testimony before the parliamentary committee, intelligence boss Sisira Mendis said security council meetings were irregular, making it difficult to properly protect the island nation.

Mendis said that when he brought up the warnings during a meeting on April 9, director of the State Intelligence Service Nilantha Jayawardena, who has a direct link to the president, told him Sirisena had already been briefed.

Jayasundara said that Sirisena, who is also the minister of defence and police, asked him to resign to take responsibility for the blasts and ensure that he would have his name cleared in any subsequent inquiry.

Hemasiri Fernando, former secretary to the defence ministry who resigned after the blasts, told the committee that Sirisena, as his minister, was not easily accessible for private discussions.

On Friday, a day after the two critical testimonies were made, Sirisena announced the removal of Mendis.

“Everybody who testified before the select committee are the officers whom I removed. We have sacked Sisira Mendis also,” Sirisena said late on Friday evening.

“Everyone knows that Sirisena had been livid about the parliamentary committee. Right on the very first day, we had the Chief of National Intelligence going before the committee, and giving testimony and evidence on the lackadaisical attitude of the president towards national security.”

“Now on the second day, we heard that there were efforts to try and stop the committee session and that the president was unhappy with all the information that is coming out. He also ordered a stop to a live telecast of the proceedings,” she said.

On Saturday, Sirisena’s media unit said in a statement that the president was opposed to police testifying before the parliamentary inquiry.

Sirisena met senior officers on Friday evening and told them he was not in favour of intelligence officers being summoned by the parliamentary committee to discuss sensitive details in the presence of the media, the president’s media unit said in a statement.

Sirisena promised to protect the officers who refused to attend the committee hearings, the statement said.

Sirisena said there were five cases being heard at the Supreme Court in relation to the blasts, and that the attorney general had informed him that the parliamentary hearing might be a hindrance to the court cases.

Sri Lankan leaders and the security establishment are under fire for not acting upon near-specific information ahead of the blasts on possible attacks on churches.

President Sirisena has vowed to restore normalcy in the country which is still emerging from a 37-year Tamil separatist war that ended almost a decade ago.

Sri Lanka’s police said last month they had either killed or arrested all those responsible for the bombings, but that the threat of further attacks persisted.