Spitfires flew over the white cliffs of Dover yesterday to mark the final countdown to the 75th anniversary of the D-Day landings on Thursday.

Aero Legends Pilots flew the iconic planes in formation above the English Channel on Sunday as the world began to reflect on the milestone anniversary approaching.

Thousands of people will take part in commemoration events across the UK and France this week.

Hundreds of veterans, the Queen and US President Donald Trump will attend ceremonies to remember what is considered one of the most important events of the Second World War and the biggest amphibious invasion in military history.

Later this afternoon more than 200 veterans will board a cruise ship charted by the Royal British Legion in Portsmouth to make it to Normandy in time for the big day.

They will be escorted by five Navy vessels and 18 gunboats as they make the poignant journey to Caen. 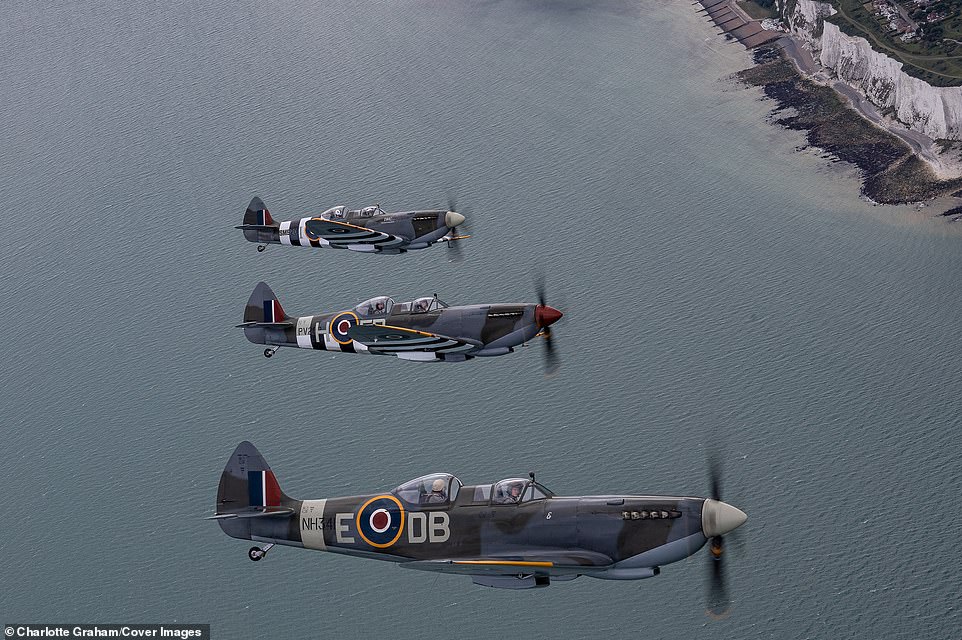 Pictures Shows Aero Legends Pilots flying in three spitfires in formation over the White Cliffs of Dover on Sunday in preparation of the 75th Day Anniversary on Thursday, June 6 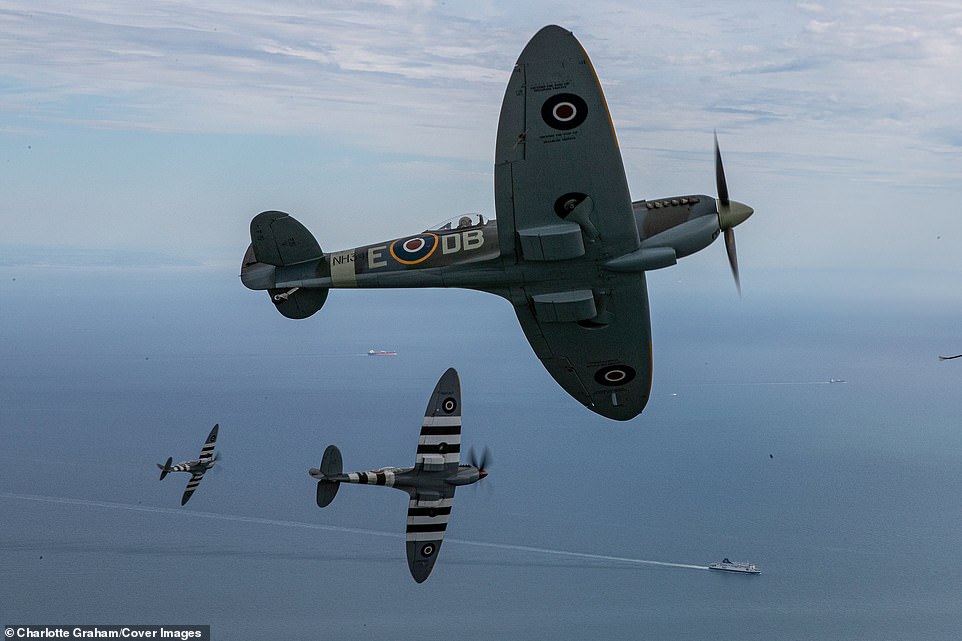 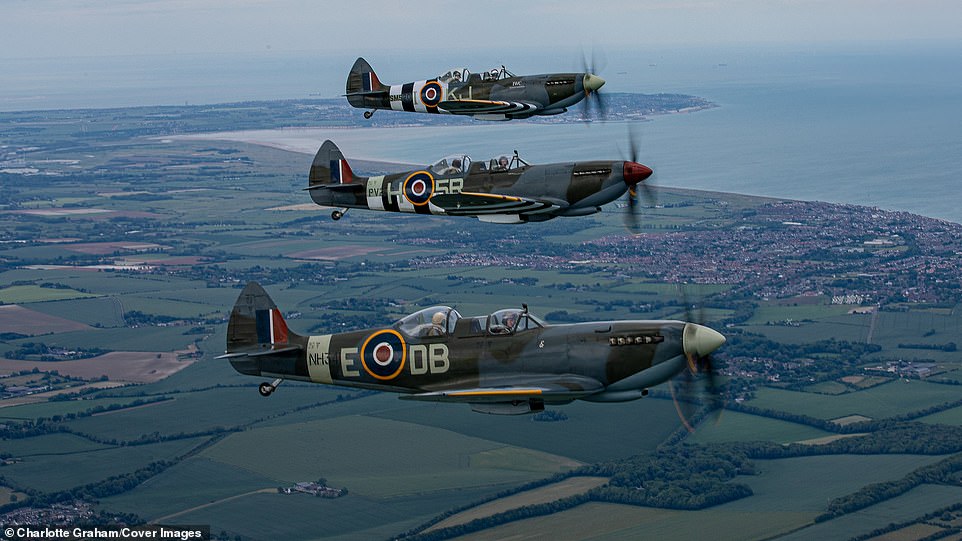 Spitfire MKIX TD314TD314 was built at Castle Bromwich in late 1944 and fitted with a Merlin 70 as a High Level Fighter. She was one of the last high back Spitfires built as the production line switched to low back aircraft in February of 1945

Two fearless D-Day veterans in their nineties are to parachute into Normandy 75 years after they first landed there.

Harry Read, 95, and John Hutton, 94, will take part in the descent on Wednesday to commemorate the anniversary of the landings.

Now a retired Salvation Army officer living in Bournemouth, Dorset, Mr Read was a 20-year-old wireless operator with the Royal Signals who had a battery the size and weight of a toolbox strapped to his right leg when he was pushed out of the plane in the early hours of June 6 1944.

Mr Hutton – known by his friends as Jock – was 19 when he served in the 13th Lancashire Parachute Battalion.

Among some 280 paratroopers, the pair will board a Dakota aircraft in Duxford, Cambridgeshire, and fly to Sannerville with the Red Devils, where they will perform a tandem jump and land in fields used as a ‘drop zone’ for the 8th (Midlands) Parachute Battalion, who went on to destroy bridges in a bid to restrict German movements during the missions.

More used to descending within 800ft of the ground and landing after 30 seconds, Mr Read last year challenged himself to a skydive from 10,000ft. 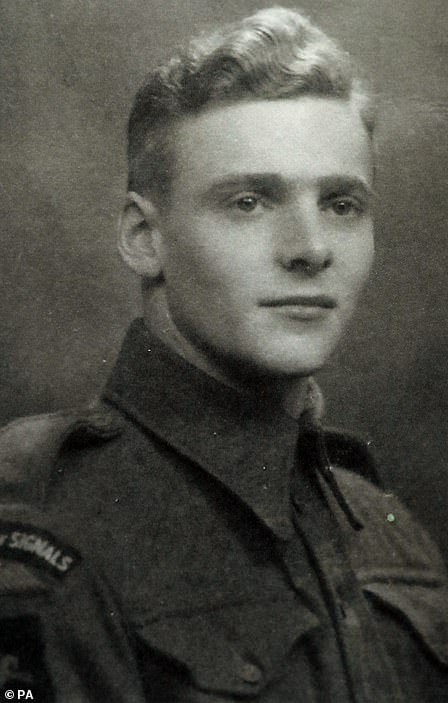 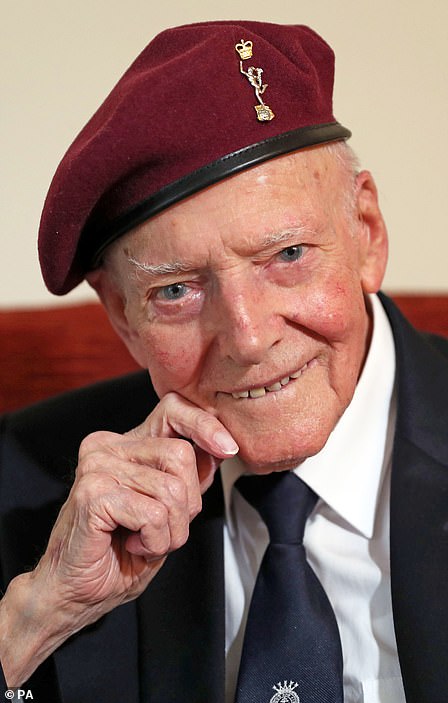 Harry Read (pictured at 19 left and today right), 95, and John Hutton, 94, will take part in the descent on Wednesday to commemorate the anniversary of the landings

After visiting the Normandy battlefields – and in a bid to support the Salvation Army’s anti-trafficking and modern slavery campaign – he resolved to try another jump again.

The great-great-grandfather, who grew up in Middlesbrough, said the forthcoming descent – after which he will visit fallen comrades in cemeteries – will be tinged with sadness.

Mr Read said: ‘I will enjoy the jump. There are very real and definite pleasures in parachuting. It might be a little bit tricky, but I’m willing to have a go.

‘But also in my heart I will be thinking of my mates. I get very moved when I think about them.

‘I have lived one of the most fulfilled lives that it’s possible for a person to live and they haven’t. I will stand in that cemetery and I will be speechless and I’ll weep.’

Presented with the Chevalier medal – by order of the Legion d’Honneur – for the role he played in the operation as part of the 6th Airborne Division, Mr Read remembers the flight over was so turbulent they could barely stand, adding: ‘It was like riding a bucking bronco.’

Then they were shoved out of the plane.

He said: ‘You’re at your most vulnerable as a para when you’re hung by your shoulders. And you know that for every bullet you can see, there are five that you can’t.

Mr Read descended amid mortar fire while an aircraft went down in flames ahead of him and shells exploded all around.

With a target just less than four miles inland, they landed with heavy equipment which was almost immediately discarded as he was submerged by flood water.

He and a comrade spent 16 hours trying to get out of the swamp before seeking refuge with a French farming family.

There a priest helped them reunite with the rest of their section so they could continue their advance towards the River Seine.

Mr Read, who told how he saw soldiers blown up in front of him and was briefed by senior officers to expect 50% casualties upon landing, said: ‘Our casualties had been heavy.

‘When we were being briefed for the actual conflict, our major general said the objectives must be carried out ‘at whatever cost’.

‘I came to the conclusion there would be no withholding of energy or effort on my part. I would not surrender.’

Being an experienced parachutist – most recently jumping at a similar event five years ago – Mr Hutton, from Larkfield in Kent, is not at all phased by the prospect of the descent.

A member of the Parachute Regiment, he said he was ‘itching all the time to join a fighting unit’ and when he saw recruitment posters ‘I put both arms up, celebrated, in my rush to get there.’

He added: ‘Military parachuting was a hurried affair, mainly by Winston Churchill.

‘He was at the stage where he was tearing his hair out wondering what to do to match up to the German army.

‘He insisted that the British Army produce 5,000 parachutists at the drop of a hat.’

Landing at Pegasus Bridge near Caen, Mr Hutton said: ‘It was in the dark, but I’d done a lot of parachuting. There was nothing strange about it.’

Mr Hutton, who initially signed up as a boy soldier in Stirling aged 15, still has shrapnel lodged in his stomach after he was injured in an explosion later in the Normandy campaign.

He said: ‘Three weeks after the landings I was on a night patrol. Germans saw us in the moonlight and threw grenades. Such was the noise I didn’t realise I had been wounded.

‘It was only when I got back to my hole in the ground, I couldn’t feel my legs.’