Beijing claims the majority of the South China Sea but this is contested by other countries including the Philippines, Malaysia, Brunei, Taiwan and Vietnam. The US does not claim any parts of the strategic waterway but it opposes China’s position. In a speech yesterday at the Future of Asia conference, Rodrigo Duterte warned the waters will be a “flashpoint for trouble” until the issue is addressed.

The Filipino leader called for a code of conduct over the sea to be finalised between China and the Association of Southeast Asian Nations.

Mr Duterte added that without a deal it risks other countries getting involved.

He said: “France, Britain, America are testing the waters. This is not a testing of waters of temperature. It is really testing who can fire the first shot.” 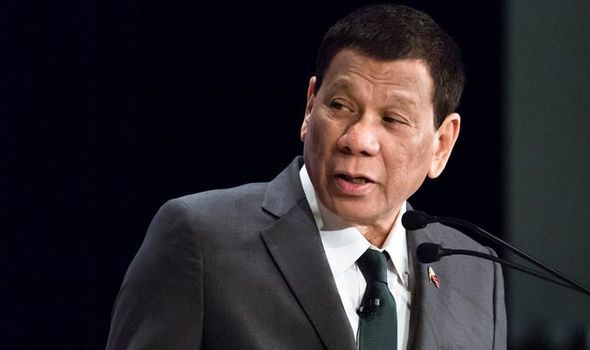 He said: “Is it right for a country to claim the whole ocean?”

It comes as acting US defence secretary Patrick Shanahan has warned Washington will no longer “tiptoe” around Beijing’s behaviour in Asia, with stability in the region threatened by a range of issues including the South China Sea.

Speaking at the annual Shangri-La Dialogue in Singapore, he referred to “artificial features” in a swipe at islands built by China in the disputed sea.

Mr Shanahan said: “Perhaps the greatest long-term threat to the vital interests of states across this region comes from actors who seek to undermine, rather than uphold, the rules-based international order.

“If the trends in these behaviours continue, artificial features in the global commons could become tollbooths, sovereignty could become the purview of the powerful.

“We’re not going to ignore Chinese behaviour and I think in the past people have kind of tiptoed around that.”