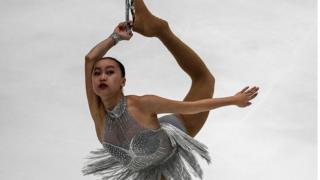 Singapore’s main sports agency says it is “dismayed” after a top figure skater said she had been severely abused while training in China.

Jessica Shuran Yu, 19, was born in China and trained there but has competed for Singapore.

She revealed this week that from the age of 11 she had been hit repeatedly by coaches, sometimes with skating blades that drew blood from her shins.

After one bad training session she said she was dragged from a car and beaten.

It is the latest in a series of accusations of abuse in the sporting world. A recent report by Human Rights Watch said mistreatment of young athletes in Japan was “rampant”.

Dozens of Australia’s former top gymnasts have also spoken out over alleged instances of mental and physical abuse.

Sport Singapore (SportSG) and the Singapore Ice Skating Association (Sisa) said they were supporting the athlete, who is now retired from competitive skating.

“The well-being of all athletes is paramount to the legitimacy of sport,” a SportSG spokesman told The Straits Times.

“(Yu) has reached out to Sisa’s safeguarding officer and the Safe Sport Taskforce, and we are supporting her as necessary.”

Sisa president Alison Chan said the organisation “applauded” Yu’s courage to be able to speak about the abuse.

The skater revealed her experiences in an Instagram post that coincided with an interview with The Guardian newspaper.

My story, in response to Athlete A and Gymnast Alliance. TRIGGER WARNING: abuse, eating disorder Edit: my DM’s are open for anyone who needs a safe space to talk!💌 #GymnastAlliance #AthleteA #AthleteAFilm #AthleteAlliance #figureskating

My story, in response to Athlete A and Gymnast Alliance. TRIGGER WARNING: abuse, eating disorder Edit: my DM’s are open for anyone who needs a safe space to talk!💌 #GymnastAlliance #AthleteA #AthleteAFilm #AthleteAlliance #figureskating

“The abuse started from the age of 11 when I started being told to reach out a hand whenever I made mistakes,” she said. “On especially bad days, I would get hit more than 10 times in a row until my skin was raw.

“When I was 14 and going through puberty, I started to struggle with my jumps because I was gaining weight. I was called over and kicked on the bone of my shin with a toe-pick of a blade and made to try again. I wasn’t allowed to limp or cry.”

She recalled how, after a bad training session at an overseas camp, she was driven to a secluded area, dragged out of the car and given a beating as punishment.

Yu said that “the physical abuse levelled off when I started competing in the seniors” but “the verbal and mental abuse was consistent” and she could not remember a time without it.

Yu, whose father was born in Singapore, represented the city-state at the 2017 Southeast Asian Games.

She said she decided to speak out after watching the Netflix documentary Athlete A, which details the cover-up of sexual abuse in US gymnastics.

The sports world has been rocked by a string of allegations of mistreatment in recent weeks.

Earlier this month it was revealed that young South Korean triathlete Choi Suk-hyeon took her own life after lodging a number of complaints over alleged abuse from her coaching staff.

According to reports, the 22-year-old said she had endured years of abuse but that her complaints to sporting authorities were ignored.

Last year, South Korea’s biggest ever sex abuse investigation was launched after several elite athletes came forward saying they had been physically and sexually abused by their coaches.

The athletes said sexual abuse had been covered up.