Sculptures by Sir Anthony Gormley have been slammed by locals for ‘looking like sex toys,’ after they were placed on a Suffolk beach without planning permission.

The four cast iron sculptures, each measuring up to 4ft long and weighing up to a tonne, are resting on the pebbled-beach at Aldeburgh in Suffolk.

East Suffolk Council is now having to decide whether to grant retrospective planning permission for the rusting artwork.

Titled ‘Quartet (Sleeping)’ it was created in 2001 by Sir Antony who is acclaimed for his work, including the 200 tonne Angel of the North in Gateshead.

It was later sold to international art collector Caroline Wiseman who has a home and gallery space in Aldeburgh.

She kept it in her home and in a friend’s garden before deciding to display it on the beach ‘as a genuine art installation for the cultural benefit of the town’. 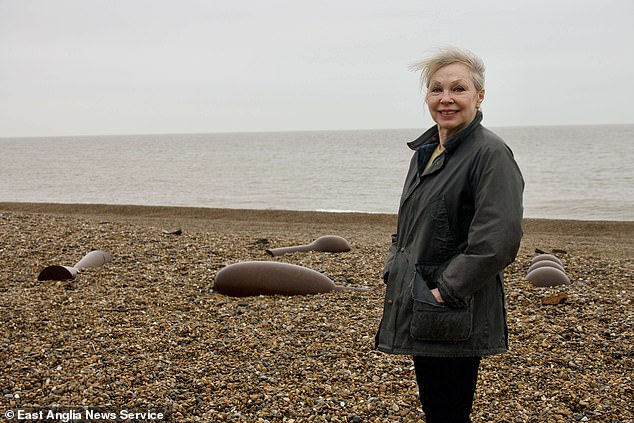 Art collector Caroline Wiseman installed Quarter on Aldeburgh’s beach ‘as a genuine art installation for the cultural benefit of the town,’ last August. It has been met with mixed reviews, with some locals saying it ‘looks like something out of Ann Summers’

The curved metal shapes are half a mile from artist Maggi Hambling’s giant scallop sculpture erected on the beach in Aldeburgh in 2003 in tribute to composer Benjamin Britten who lived in the town.

Many residents have praised the Gormley work as a welcome addition to the cultural attractions of the seaside town, but others have been less complimentary.

As well as saying they resembled oversized sex toys, others compared the piece to a ‘variety of giant dog poo’ or ‘giant rabbit droppings’.

Mrs Wiseman did not think she needed planning consent when she had the sculptures hauled in place on the shingle near a tower on the beach called Southern Lookout, which she uses as a workspace for guest artists.

But she has now submitted a retrospective planning application, meaning the artwork which faces the daily ravages of the North Sea is under a more immediate threat from local councillors.

A planning statement drawn up for her by East Coast Planning Services states: ‘The placing of these sculptures on the beach was not a cynical attempt to circumvent the planning process but a simple misunderstanding that planning permission was not required. This application seeks to regularise the planning position.’ 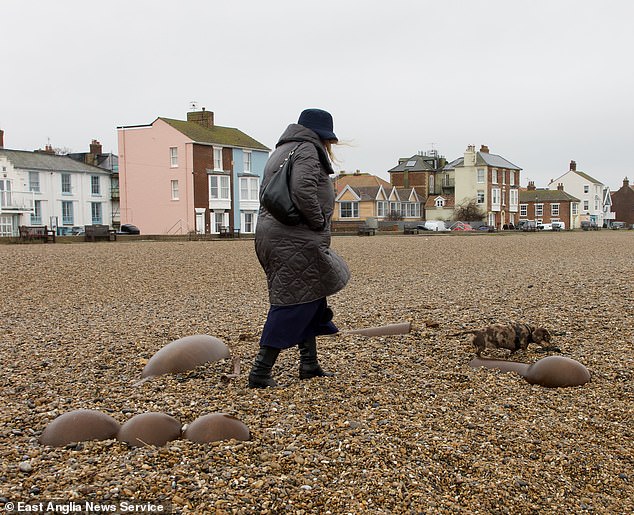 The four cast iron sculptures, each measuring up to 4ft long and weighing up to a tonne, were installed without planning permission. East Suffolk Council is now deciding whether the pieces can remain in place 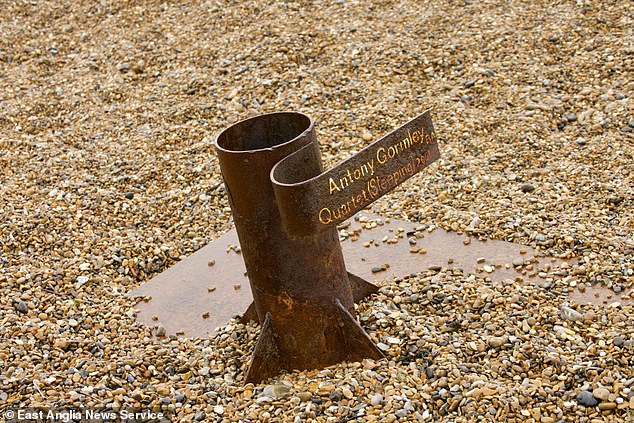 The artwork was made in 2001 by Sir Antony Gormley, who is acclaimed for his work, which  includes the 200 tonne Angel of the North in Gateshead

The statement describes the curved shapes as being ‘relatively smooth’, sitting horizontally on the shingle without pre-prepared bases or anchoring points and being compliant with local and national planning policies.

It adds: ‘In terms of the wider beach area, the proposal is an unobtrusive installation on a very small section of the beach.

‘The sculptures are small and partially buried within the shingle such that they extend above the shingle by a mere 300mm or so.

Yorkshire-born Sir Anthony Gormley, 70, has been creating artistic sculptures since the early 1980s, with his first exhibition coming in 1981.

Many of his pieces focus around the human body, and he has regularly used his own body to create metal casts for his work.

His pieces are often displayed on a huge scale.

In 2006 his work Asian Field was displayed at the Sydney Biennale. The piece was an installation of 180,000 small clay figurines crafted by 350 Chinese villagers.

The following year 31 life-size and anatomically correct casts of his body were displayed around London’s South Bank in a piece he called Event Horizon.

Crosby Beach in Merseyside is home to Another Place – 100 cast iron naked figures modelled on Gormley’s own body. They have been on display since 2005.

His most well-known work is the Angel of the North in Gateshead.

‘Being cast iron, they have acquired a very weathered patina and have quickly been assimilated into their beach environment.

‘The sculptures are largely unseen from any distance and can only be appreciated when viewed from close by.’

The statement goes on to say that the sculptures have a ‘negligible and certainly less than substantial’ impact on the Conservation Area in Aldeburgh.

It says: ‘Any harm to this designated heritage asset that can be said to result from the sculptures is more than outweighed by the public benefits arising in terms of the enhancement of the cultural well-being of Aldeburgh resulting from the work of this internationally renowned sculptor.’

The statement concedes that the artwork is at risk from the changing shape of the beach and may one day be swamped by the sea.

Mrs Wiseman, defended the artwork, saying: ‘The shapes look really lovely and beautiful. I kept them quietly, and then thought that I should show them. It is so much better for people to see them.

‘They are sympathetic to the environment and their colour fits in with the shingle. I think they look rather like sleeping seals. They are incredibly heavy and not particularly expensive, so I don’t think anyone is going to run away with them.

‘Aldeburgh is one of the most cultural seaside towns in Britain and this the ideal place for them. Everyone here adores them.

‘I was very worried that the sea was going to get them in the second Beast from the East last week, but they survived. Children love playing on them and sitting on them.’

Aldeburgh’s deputy mayor Peter Palmer said: ‘The planning application will be discussed by the town council and I don’t want to say anything about it before that happens.’ 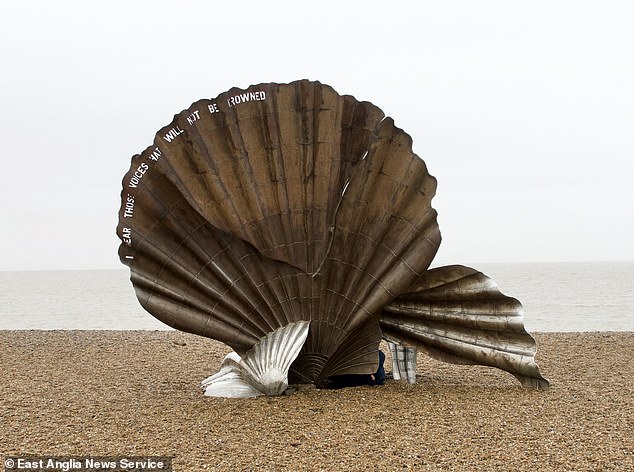 Maggi Hambling’s 13ft high scallop structure was put on Aldeburgh beach in the face of furious opposition from some locals.

It was vandalised with paint and daubed with messages calling it ‘a tin can’ at least 12 times between 2004 and 2011.

John Carrington, 34, a digital marketing specialist working in Aldeburgh and living nearby, said: ‘I think it is very good for the town. We are a cultural destination with global reach and it will be another attraction.

‘I thought it was very interesting when I first saw it, although I didn’t appreciate it was a Sir Antony Gormley piece. Knowing that it is a Gormley work, makes it even more special. 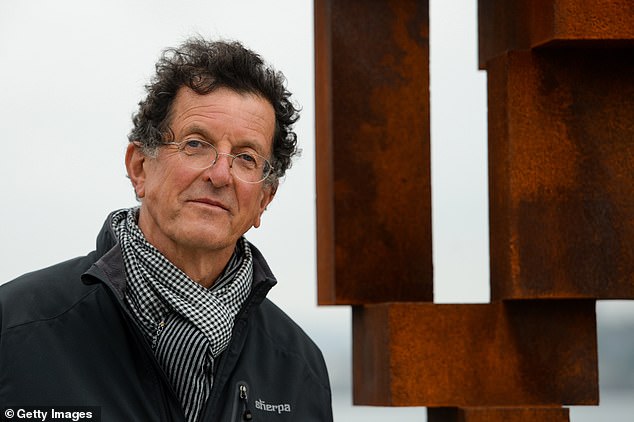 ‘I know many people don’t like new things, but over time, I think they will get used to it, and come to view it as part of the landscape in Aldeburgh.’

Aldeburgh Town Council clerk Ruth Proctor said: ‘I think, as with anything in Aldeburgh, the views about the artwork are polarised.

‘There is some support for it on social media as well as comments from people who perhaps didn’t initially understand that it is art.

‘The scallop sculpture has an information board explaining the design and concept. It is unfortunate that there is not something similar for the Gormley piece.

‘Our planning committee is being consulted as a courtesy and will be discussing it next week.’