Moscow: Russia has cleared a hurdle in its vaccine rollout with the publication in the respected British medical journal The Lancet of late-stage trial results showing that the country’s Sputnik V vaccine is safe and highly effective.

The publication is sure to buoy the Russian government’s promotion of the vaccine at home and around the world, strengthening the Kremlin’s hand in vaccine diplomacy with a credible endorsement of the product’s safety. 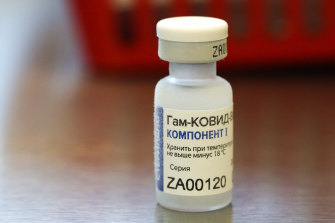 A vial of the ‘Gam-COVID-Vac’, also known as ‘Sputnik V’, COVID-19 vaccine, developed by the Gamaleya National Research Centre for Epidemiology and Microbiology and the Russian Direct Investment Fund at the City Clinic #68 in Moscow, Russia.Credit:Bloomberg

Russia drew criticism from Western experts when it approved the vaccine developed by the Russian research institute Gamaleya, for emergency use in August — before late-stage trials had even begun — and started vaccinations that month.

It claimed victory in the vaccine race, as it had decades earlier in the space race with the launch of the Sputnik satellite, though at the time other vaccines were further along in testing. In the end, its politicised rollout only served to deepen scepticism.

The peer-reviewed article published on Tuesday (Wednesday AEDT) cleared those doubts. It showed the vaccine had an impressive efficacy rate of 91.6 per cent against the virus, and was completely protective against severe forms of COVID-19.

“The development of the Sputnik V vaccine has been criticised for unseemly haste, corner cutting, and an absence of transparency,” two independent researchers, Ian Jones of the University of Reading and Polly Roy with the London School of Hygiene and Tropical Medicine, wrote in a commentary published in The Lancet. 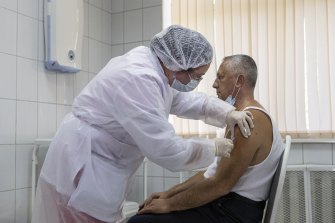 A Russian healthcare worker administers the vaccine to a volunteer in Moscow in September.Credit:AP

“But the outcome reported here,” they continued, “is clear and the scientific principle of vaccination is demonstrated.”

Their commentary did note that the design of the Russian vaccine, which relies on a genetically modified cold virus and is similar to half a dozen others including those made by Johnson & Johnson and AstraZeneca, is difficult to mass produce.

Though quick out of the gate with regulatory approval, Russia has lagged in mass production and actual vaccinations, the process that in fact protects people from illness and death.

The Russian financial company promoting the vaccine has said about 2 million people have been inoculated with Sputnik V worldwide, far fewer than with the Pfizer or Moderna vaccines.

The company, the Russian Direct Investment Fund, does not break down the vaccinations by country. But of the 2 million vaccinations, at least hundreds of thousands have been in countries outside of Russia, suggesting the government has quietly prioritised exports.

While beneficial for speeding global immunity to the disease, the policy has also reaped public relations and diplomatic benefits for the Russian government, even as residents of many provincial Russian cities still do not have access to shots. On Monday, for example, the authorities in the Leningrad region in north-west Russia said supplies had run out.

So far, 15 other countries, including Argentina, Hungary and Serbia, have approved the Sputnik V vaccine for emergency use.

“Publication in The Lancet today really shows that Sputnik V is the vaccine for all mankind,” Kirill Dmitriev, director of the Russian Direct Investment Fund, said in a statement. “Today is a great victory.”

The vaccine is one of three that have completed late-stage trials showing an efficacy rate above 90 per cent, along with the shots made by Pfizer and Moderna.

The version of the Russian vaccine tested in the trials must be shipped and stored at difficult-to-manage temperatures below around minus-18 degrees Celsius. The Russian Ministry of Health has also approved a freeze-dried version that can be stored in a refrigerator. Russia is marketing Sputnik V at a price of about $US10 ($13) per dose for the two-shot vaccine.

The clinical trial conducted in Moscow late last year on about 20,000 volunteers showed only side effects commonly associated with vaccines, such as headaches or mild fevers.

The researchers determined that no so-called adverse events, or serious medical problems among the trial participants, were associated with the vaccine. In total, they found 70 serious medical episodes in 68 people in the trial, in both the placebo and vaccine group.

Notably, two people who were administered the vaccine died of COVID-19 following illnesses that began days after the first injection. The researchers said both people were likely infected before the trial began and fell ill before the vaccine had time to generate antibodies to the coronavirus.

The “disease had progressed before any immunity from the vaccine developed,” they wrote.

The Russian authors of The Lancet article also noted the trial in Moscow lacked ethnic diversity to ensure the vaccine is safe in non-white recipients. A trial of Sputnik V underway now in the United Arab Emirates includes a more diverse study group, the researchers say.

Outside experts said the data convincingly shows the vaccine works. But because the trial was conducted in Russia in the northern autumn, before the spread of virus variants that have shown signs of eroding vaccine effectiveness, questions loom about how protective the vaccine will be in the face of emerging threats.

“Results are great,” Hildegund Ertl, a vaccine scientist at the Wistar Institute, said. “Good safety profile, more than 90 per cent efficacy across all age groups, 100 per cent efficacy against severe disease or death, can be stored in the fridge and low cost. What more would we want?”

AstraZeneca and Gamaleya announced in December that they were working together to explore whether combinations of their vaccines might be beneficial, The Washington Post reported.