Edinburgh: A Russian pop-star with a claim to be the country’s most famous woman has criticised Vladimir Putin’s war in Ukraine, saying it is pointlessly sending young men to die.

Alla Pugacheva rose to stardom in the late ’60s and sold more than 250 million records, winning a string of national awards alongside plaudits from Boris Yeltsin and Mr Putin himself.

In a statement on Instagram, the 73-year-old said: “The death of our boys for illusory aims makes our country a pariah and weighs down on the lives of our citizens.” 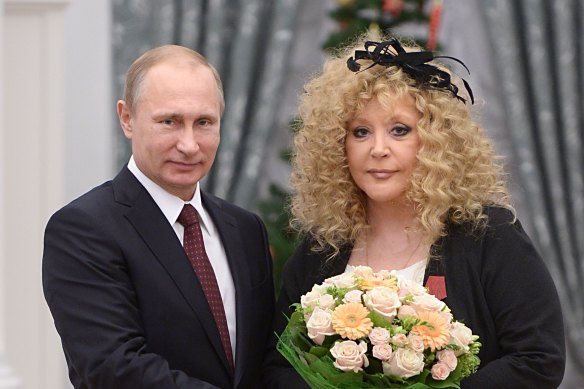 Vladimir Putin and Russian pop singer Alla Pugacheva pose for a photo during an awards ceremony at the Kremlin in 2014.Credit:AP

Analysts say her remarks could bring dissent to new audiences among the apolitical or supporters of the Kremlin.

Viv Groskop, the British comedian and author of a book on Russian culture, said Pugacheva was “arguably the biggest star in Russia” and the “Russian Dolly Parton”.

Pugacheva asked Russia’s justice ministry to declare her a “foreign agent” alongside her husband, the TV comedian and talk-show host Maxim Galkin. Both fled the country at the start of the invasion.

The “foreign agent” label has negative, Soviet-era connotations and its bearers have to place it on all content they publish. They also face financial and bureaucratic requirements.

Pugacheva’s request to be labelled a foreign agent places the Kremlin in a bind, commentators said. Joshua Yaffa, an author on Russia and correspondent for The New Yorker, said it was “unclear how the Kremlin responds”.

“Pugacheva is as close to universally loved national royalty as it gets – admired as much or more by otherwise apolitical, war-ignoring masses across the country than urban intelligentsia,” he wrote on Twitter.

Russia’s leaders have long sought to associate themselves with Pugacheva, whose biggest hit is a 1983 cover of the Soviet love song Million Scarlet Roses.

On her 60th birthday in 2009, then-president Dmitry Medvedev awarded her the 3rd Degree Order of Merit for the Fatherland. Putin invited Pugacheva to awards ceremonies at the Kremlin and photo shoots.

Ksenia Sobchak, the Russian socialite and Putin’s goddaughter, has backed Pugacheva. She told her 1.25 million Telegram viewers, cryptically, that Pugacheva would “outlive you all”.

“Alla Pugacheva speaking out against the war is quite a landmark moment,” Russia analyst Leonid Ragozin wrote on Twitter. “No way Putin can get around it. She is equal to him in social standing terms. Or bigger.”

In Ukraine, the fiercest fighting continued to focus on the Oskil River in the northeast, 120 kilometres east of Kharkiv.

Russian forces fled across the river to escape a Ukrainian offensive that recaptured an area roughly the size of Devon.

Reports say Ukrainian forces had broken through the Russian defences and crossed the Oskil River, described by analysts as the last line of defence ahead of the Luhansk region.

The US-based Insisture for the Study of War said morale and leadership credibility had plummeted so low in the Russian army that they were picking off “meaningless” soft targets rather than reinforcing their frontline along the Oskil River.

“The Russians … appear to be continuing an almost robotic effort to gain ground in Donetsk Oblast that seems increasingly divorced from the overall realities of the theatre,” it said.