Corporate titan Ron Brierley had more than 10,000 images of child abuse material in his possession when he was arrested at Sydney Airport in 2019, telling police he thought they were “perfectly okay” and he looked at them for recreation, court documents reveal.

Brierley, 84, had been on his way to Fiji when Australian Border Force officers stopped him on December 17. He unlocked his laptop, and the officers observed material that amounted to child abuse material. 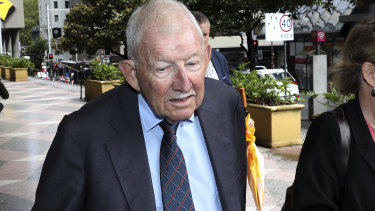 A total of 11,765 child images were found on his laptop and two USBs, some of which were duplicates. Brierley also had two sexually explicit written stories, detailing the abuse of children, and an almost two-hour video of six young girls in their swimmers.

According to agreed facts, tendered to Downing Centre District Court on Friday, Brierley was taken to a private room by police and informed officers had located “a number of images and videos”.

He said the images were freely available on the internet, and he downloaded them because they “looked interesting”. Brierley said he looked at the images for “recreation” and he had most recently looked at them the night before.

Brierley admitted to reading the written stories, which detailed the abuse of a 9-year-old girl and an 11-year-old girl. He said he had received them from the United States and hadn’t been sent any for a long time.

Later that day, police raided his home in the affluent Sydney suburb of Point Piper and seized one laptop and 12 USBs, which contained a combined total of 35,030 child abuse images, some of which were duplicates. The youngest of the children appeared to be about four years old.

It is not known how long Brierley possessed the images, how he organised them, or how frequently he accessed them.

“He appears to have duplicated folders and images across multiple devices. The full extent of the duplication is not known,” the agreed facts state.

Brierley – who made his name as a corporate raider in New Zealand and Australia in the 1980s – pleaded guilty in April to three counts of possessing child abuse material. The charge has a maximum penalty of 10 years’ imprisonment.

The former board member of the Sydney Cricket Ground trust was knighted in 1988 in his native New Zealand for his contribution to business and the community.

However, after he pleaded guilty, New Zealand Prime Minister Jacinda Ardern indicated she would begin a process to strip Brierley of his knighthood.

In a statement earlier this month, Ardern said Brierley was written to on April 6, giving him 30 days to respond, and responded tendering his resignation as a Knight Bachelor.

Brierley, who is a dual Australian and New Zealand citizen, has no criminal history in either jurisdiction.

He will face a sentencing hearing on August 20.

Our Morning Edition newsletter is a curated guide to the most important and interesting stories, analysis and insights. Get it delivered to your inbox.