Riot police converged on Melbourne’s CBD in a show of force before today’s threatened protests, and Victoria Police Deputy Commissioner Rick Nugent says some arrests had already been made early in the morning. 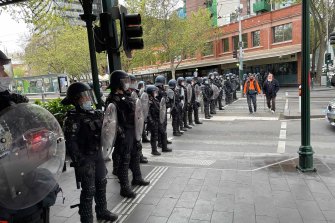 But with city streets blocked by police who are also checking the identification of people heading into the CBD, the area was quiet for most of Wednesday morning.

A smaller crowd of protesters entered the city late in the morning and marched along Lonsdale Street.

Between 1000 and 2000 people protesting against COVID-19 vaccine mandates met in the city on Tuesday, before blockading the West Gate Bridge in a sometimes violent march that organisers vowed to repeat on Wednesday.

Victorian construction union leader John Setka said any CFMEU members found to have participated in violent protests would be expelled from the union.

“Let me tell you, people that were involved in the violent protest, they may as well go pick fruit in Mildura somewhere because they will not be working in our industry,” he told ABC radio this morning.

Premier Daniel Andrews condemned the protests and said Victoria Police would “take action against those who did the wrong thing yesterday”.

“They’re not there to protest; they’re there for a fight.”

Mr Andrews said that despite a few thousand people choosing to protest, about 90,000 people got vaccinated on Tuesday.

“That’s the more important number. They know that the way out of this is not violence, it’s vaccination,” he said.

There are more than 330 active cases across the sector.