Trump mayhem: Protesters vow to paralyse London during President Trump’s visit with marches, a rude robot and THAT blimp

Hundreds of thousands of activists are preparing to paralyse London with mass demonstrations during Donald Trump’s state visit next week.

More than 20,000 police officers will be deployed at 20 separate events planned across the country in a security operation expected to cost about £18million.

The main protest will be held in central London on Tuesday with organisers claiming a quarter of a million will march from Trafalgar Square to Parliament Square. Scotland Yard has given them permission to protest just yards from Downing Street while the US President has lunch there with Prime Minister Theresa May. 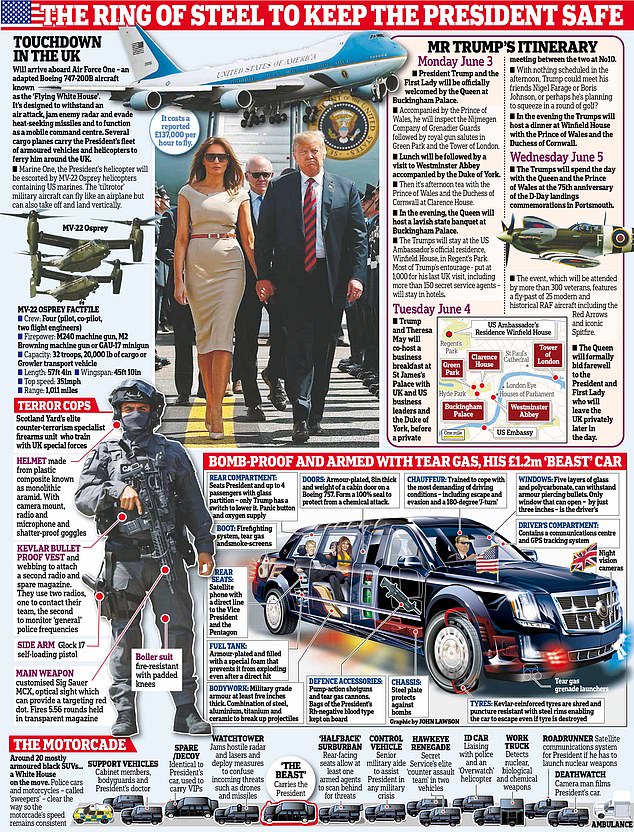 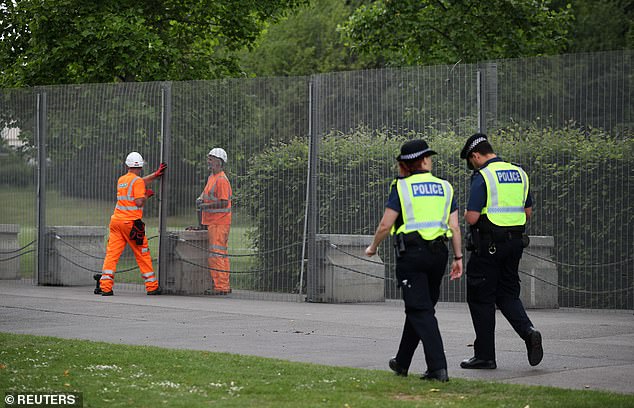 Pictured: Police patrol near the US ambassador’s residence in Regent’s Park, London, as barriers are erected ahead of Trump’s visit 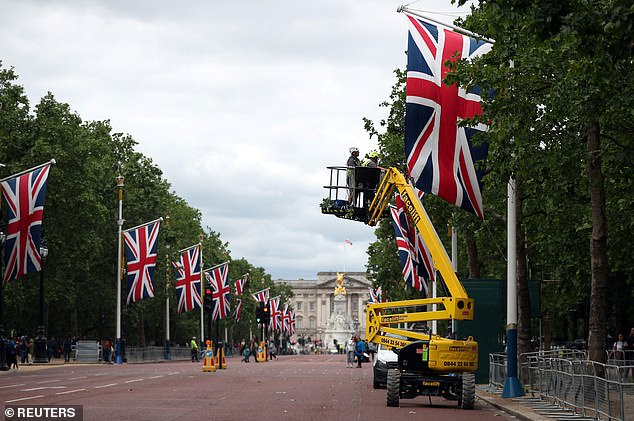 Pictured: Workers line the mall today with Union Flags as the capital makes preparations for the arrival of US President Donald Trump in London

Two groups – Stand Up To Trump and Stop Trump – are co-ordinating protest groups for what they are calling a ‘carnival of resistance’. They have laid on coaches to bring thousands of supporters to the capital from cities and towns across the UK.

A spokesman for Stand Up To Trump said: ‘We will be bringing central London to a standstill. By the time he leaves he will know, and the world will know, that people here reject him and his toxic politics.’

Stop Trump added: ‘We will make it clear to the British Government it’s not OK to normalise Trump’s agenda and the fear it has sparked.’

Mr Trump and his wife Melania are being given the full red carpet treatment, with the Queen hosting no fewer than four events in tribute to them. Royal gun salutes will fire in Trump’s honour at the Tower of London and in Green Park, while Prince Charles, Prince William, Prince Harry and the Duke of York will be heavily involved too. 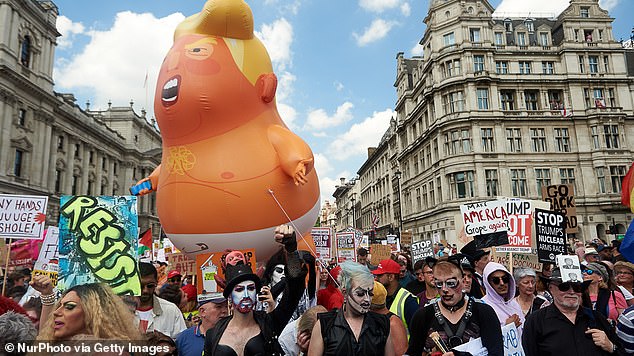 The protesters, who are being led by a ragbag army of hard-Left activists and Corbynistas, are planning to fly an offensive 20ft blimp depicting the President as an angry baby. It was previously flown during Mr Trump’s visit last year after London’s Labour mayor Sadiq Khan licensed its use.

Last night the mayor’s office once again granted permission for it to be flown over the capital, although protesters still need final approval from the Metropolitan Police before it is launched.

A 16ft talking robot of Mr Trump sitting on a gold toilet, which has been shipped to the UK from China, is also expected to make an appearance. It depicts the US leader with his trousers round his ankles while tweeting, and emits breaking wind noises and recordings of some of Trump’s provocative soundbites, including ‘no collusion’, ‘you are fake news’ and ‘I’m a very stable genius’. 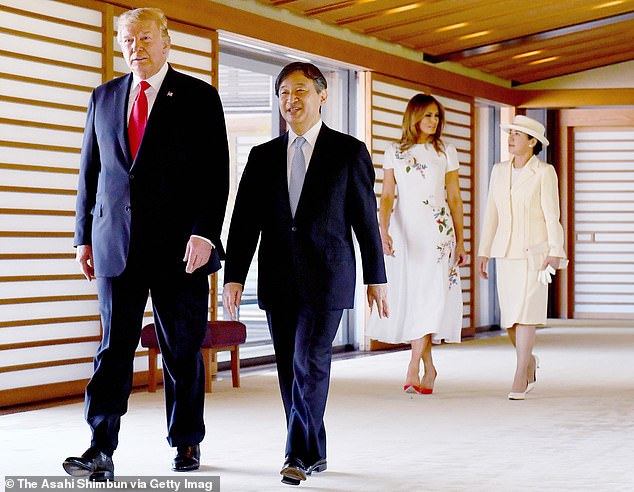 More than 20,000 police officers will be deployed at 20 separate events planned across the country in a security operation expected to cost about £18million

Thousands of protesters are also expected to stage a demonstration outside Buckingham Palace during the royal banquet on Monday night being held in honour of the US President.

The Women’s Peace Council is staging a rally called The People’s Banquet because it does not believe Mr Trump ‘deserves this red carpet treatment’.

Shadow Foreign Secretary Emily Thornberry yesterday announced that she would be attending the main rally and urged her supporters to join her.

Using the slogan #StopTrump, she said she is marching because the US President ‘is destroying all the values that have always united Britain and America’.

Dawn Butler MP, Labour’s women and equalities spokesman, issued a rallying call to activists, saying: ‘If you do one thing next week, it’s come out on your lunch break and stand up against Trump.

‘Stand up against all of the hatred that he uses to elevate himself and say, “Not here, not in our country. We don’t want it and we don’t want you.” ’

The 2018 anti-Trump protest was led by Labour leader Jeremy Corbyn, but the party remained tight-lipped last night over whether he is planning to attend Tuesday’s rally. Mr Corbyn has already turned down the Queen’s invitation to the royal banquet at Buckingham Palace.

There are fears that fierce anti-Trump sentiment could turn violent, and Met police chiefs are concerned that activists may adopt similar tactics used at the Extinction Rebellion protests, which brought misery to thousands in April when large parts of the capital were closed for days by protesters.

The Met said officers have met organisers of the main anti-Trump protest and have banned demonstrators from walking the entire length of Whitehall to allow the President’s motorcade to enter Downing Street without hassle.

During last year’s visit, Mr Trump spent only a few hours in London and so avoided most of the protesters, although he did acknowledge he had been made to feel unwelcome and suggested he might never visit London again.

On this occasion he will almost certainly see – and hear – thousands of anti-Trump activists.