The former minister for multicultural affairs and finance will be challenged for preselection by Nathan Lambert, a former Labor official, adviser to Treasurer Tim Pallas and management consultant at global firm McKinsey.

Preselection challenges to sitting MPs are extremely rare in the Labor Party, which prides itself on its organisational discipline and ability to generate renewal among MPs behind closed doors. Five sitting Liberal MPs are being challenged. 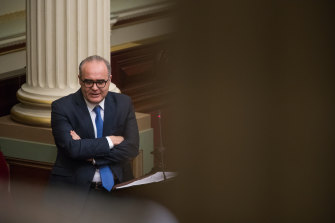 Mr Scott has faced questions about his involvement in grants to multicultural groups run by Labor recruiters who belonged to Mr Somyurek’s factional web. But the member for Pascoe Vale elected in 2006 intends to contest the ballot and told The Age he was proud of his achievements.

“I am very proud of my record of integrity and accomplishment in public life,” he said.

He took a subtle swipe at the federal takeover of the party caused by Mr Somyurek’s downfall in 2020, after which rank-and-file members have been barred from voting in internal elections. “Given that my local community is barred from participating in these ALP preselections, I look forward to putting my candidacy to Canberra’s national executive,” he said.

Mr Lambert, who was rumoured to be running in a new northern suburb seat or in Geelong, is being backed by the Shop, Distributive and Allied Employees Association (SDA). Along with another right faction grouping aligned with Richard Marles, the SDA is a dominant force in the post-Somyurek Labor Party.

If Mr Scott is ousted, it would take to seven the number of Labor MPs who will not be in Parliament after the November, 2022 election. This number could grow in the next week because pressure is being placed on veteran MPs including Frank McGuire and Nazih Elasmar to stand aside.

These MPs are on a list of close to 10 MPs who the ruling factions – including the Socialist Left faction that produced Premier Daniel Andrews – are aiming to move on. Many of these MPs were aligned with Mr Somyurek, and the groups that now dominate the party are uncomfortable with his former allies remaining in Parliament given a corruption inquiry into his behaviour is ongoing.

At corruption hearings last month, evidence was presented detailing conversations between Mr Scott’s staff and factional allies who were lobbying for government grants that Mr Scott controlled. Unlike Ms Kairouz and Mr Somyurek, Mr Scott did not admit to branch stacking. No such allegations have been levelled at him and the party has not taken any disciplinary action against him.

A Victorian cabinet source, speaking anonymously to detail confidential cabinet discussions, said Mr Scott was the first minister to warn of the dire situation Victoria would be in if it did not take strong action against COVID-19 in the first months of 2020.

Mr Scott was in China when the city of Wuhan locked down, and began sounding the alarm about the virus in February before significant transmission occurred in Australia. Mr Scott was perceived by some MPs as being neurotic and overly catastrophic in these early months before the media and political class realised the pandemic was likely to reach every corner of the globe.

In the first term of the Andrews government, he led the government’s reforms to tackle far-right extremism.