NSW will accept an extra 500 international travellers per week on the condition that other states and territories double their own numbers to share the load.

Premier Gladys Berejiklian said it was a "fair response" to a request from Prime Minister Scott Morrison, "given the hardship that people are facing" overseas. 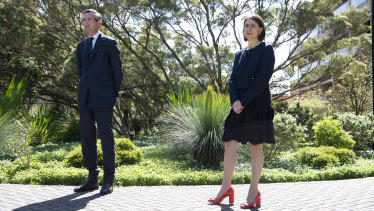 No place like NSW: Premier Gladys Berejiklian says there should not be a border closure with Queensland based on current COVID-19 levels.Credit:Louise Kennerley

“I consulted my relevant ministers and the police commissioner, who is in charge of quarantine, and everybody said they could take on that extra load,” Ms Berejiklian said.

The agreement would mean Queensland and WA would go from accepting around 500 travellers a week to 1000, roughly one-third of the current NSW intake.

Closer to home, Ms Berejiklian welcomed Queensland flagging a reduction of the benchmark for reopening the border with NSW from 28 days without community transmission to 14 days.

"I'm relieved that [Premier Annastacia Palaszczuk] put the impossible benchmark down to a highly unlikely benchmark," Ms Berejiklian said, but added that the 14-day limit was "potentially unrealistic."

"By anyone's standards, at this point in time NSW doesn't have any hot spots. I'd be arguing there is no reason to keep the borders closed today."

She said Premier Palaszczuk's "no community transmission" model was flawed because often – as happened on Wednesday – a previous case with no known source is found to be a false positive or linked to a cluster days after it is reported.

"You don't really want to make decisions based on one case or two cases because often it takes a few days to test the genomics."

The Premier used her comments to further encourage Qantas to stay based in NSW, rather than move to Queensland (as has been placed on the table), saying NSW had demonstrated a "culture" of pushing for domestic travel and economic growth.

NSW is set to ease its restrictions on the Victorian border, as regional Victorians are afforded more freedoms by their own government.

Ms Berejiklian said her government would be making some amendments to border restrictions for "consistency", increasing the size of its border bubble in amendments to looked at "today or tomorrow".

"We are increasing the number of towns, I think around Shepparton, that will be included in that border community," she said.

"And we're also we've provided hundreds of exemptions for both shearers and harvesters to make sure that critical [agriculture] workers are getting across the border as well outside of those border communities."

The Premier said the changes would be "implemented in the next week or so".

These Celeb Homes Stole the Show During the 2020 Emmys

Jennifer Aniston, Zendaya and Reese Witherspoon gave fans a sneak peek inside their homes during the 2020 Emmy Awards. Scroll

Equinox 2020 horoscope: How will the autumn equinox affect YOUR astrology forecast?