‘I still have a high temperature’: Boris Johnson reveals he will NOT be out of coronavirus self-isolation today because he still has symptoms

Boris Johnson is to remain in self-isolation after failing to fully recover from coronavirus, he revealed today.

The Prime Minister was due to exit quarantine in Downing Street today, seven days after testing positive.

But in a video message today he confirmed that he continues to have a high temperature and will therefore remain in isolation.

‘Although I’m feeling better, and I’ve done my seven days of isolation, alas I still have one of the symptoms, a minor symptom – I still have a temperature,’ he revealed.

‘So in accordance with Government advice I must continue my self-isolation until that symptom itself goes.’

He appeared at the door of No 11 Downing Street, where he lives, to join in the mass clapping for key workers at 8pm last night.

It came as Matt Hancock, who has recovered, described the illness as feeling as if you had’ razors in your throat’. 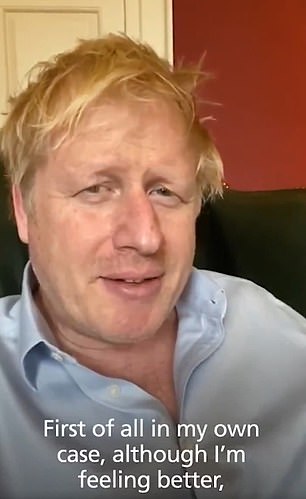 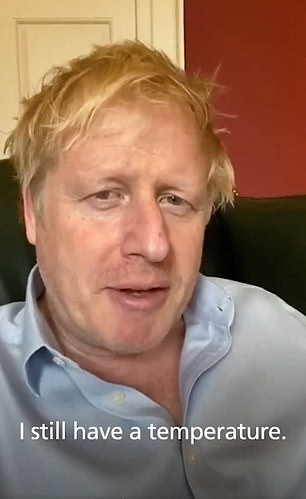 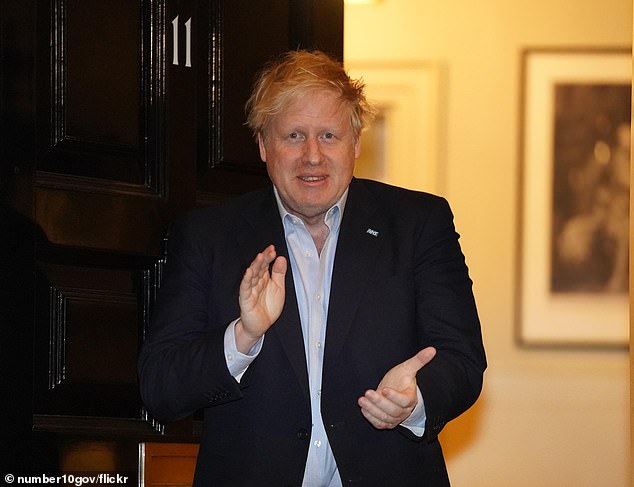 Mr Johnson appeared at the door of No11 Downing Street, where he lives, to join in the mass clapping for key workers at 8pm last night 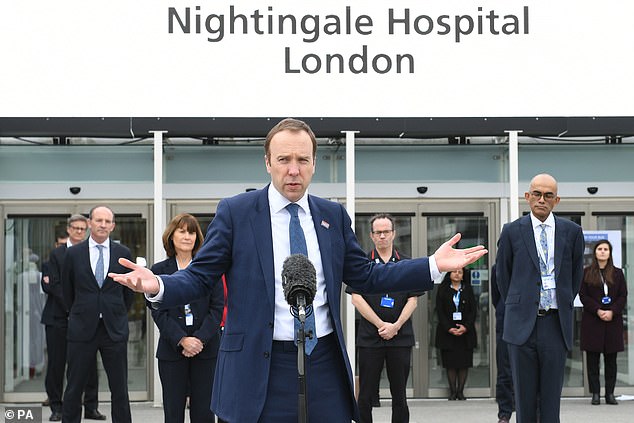 It came as Matt Hancock, who has recovered, described the illness as feeling as if you had’ razors in your throat’

Mr Johnson went into isolation last Friday but has continued to work while being kept apart from his staff, other ministers and also his pregnant fiancee, Carrie Symonds.

His official spokesman told reporters today: ‘He does continue to have mild symptoms, in particular a high temperature.

‘The guidance is clear that if you still have a high temperature you should keep self isolating until it returns to normal.’

Matt Hancock this morning told of his concerns at how serious things might get when he was struck down by coronavirus, describing how he lost half a stone during the illness.

The Health Secretary branded the disease ‘indiscriminate’ and said it had left him unable to eat or drink for a few days and he had been unable to sleep.

Mr Hancock, who said he had begun to go ‘downhill’ on March 26, claimed the worst part had been not knowing how bad things might get.

He told BBC Breakfast: ‘When you’re on the way down it’s really worrying because we can all see just how serious this illness is.

‘And, for some people, the people who often get into the worst of health and those who lose their lives, it’s often because the lungs over-react to the virus, there’s an immune response. And you just don’t know if that’s going to happen, so I found it really worrying.’

Having addressed the daily Downing Street press conference on Thursday as his first public appearance back at work, he did a round of media interviews on Friday morning.

Speaking to Good Morning Britain, he said: ‘I had two days or so when it was like just razors in your throat, a very, very sore throat. I couldn’t eat and I couldn’t drink.

‘The worst bit was on the way down, worrying how bad it would get because we’ve all seen how bad it can get and it seems to be indiscriminate.’