Before and after Bedlam: How the Victorians promoted success stories from notorious asylum

Photographs taken of patients at Bedlam asylum in London in the 1850s reveal how the Victorians promoted so-called success stories of patients who were suffering with a plethora of mental health conditions.

The ‘before and after’ shots were used as a promotional tool for the brutal hospital in order to show the outside world how they were supposedly curing patients who arrived at the asylum, seeking treatment for conditions such as ‘puerperal insanity’.

But they hid the truth about the asylum which was known to have had a rudimentary understanding of mental health and employed ‘treatments’ such as chairs suspended in mid air, which would leave the patients hanging upside down.

Some were also known to have been forcibly dunked in cold baths by the people who were meant to be caring for them, while others were starved or beaten.

One of their case studies had been Eliza Josolyne who was admitted in 1857 with acute melancholia. They branded her as a success story, but the truth was far from that. Josolyne remained at a special ward in Bedlam until her death 50 years later.

This is while other patients such as Emma Riches had been force fed at the institution, after she was admitted with postnatal depression, she returned to the institution on three other occasions throughout her lifetime.

Better known as ‘Bedlam’, Bethlehem Royal Hospital was for centuries an institution synonymous with the worst excesses of asylums.

The word ‘bedlam’ – meaning ‘a place or situation of madness and chaos’ – even entered the language after the hospital became a by-word for its bad conditions.

Founded in 1247 during the reign of Henry III, the original building was built atop a sewer, which frequently overflowed, leaving patients to trudge through the foul muck.

In the 17th century the building started to crumble so a new structure was commissioned with two miserable human sculptures flanking the entrance named ‘Melancholy’ and ‘Raving Madness.’

One treatment, invented by the grandfather of Charles Darwin, Erasmus Darwin, called rotational therapy, involved putting a patient in a chair suspended in the air and then spun round for a few hours.

In the 18th and 19th centuries patients were subjected to a whole host of awful treatments. During this brutal period a Quaker philanthropist Edward Wakefield visited Bethlem in 1814 and described naked, starved men chained to walls.

A notorious aspect of Bethlem was its availability to public. Wealthy patrons would often pay a shilling to gawp at the unfortunately souls locked in the asylum, such as the patients below whose time at the institution was documented with ‘before and after’ shots. 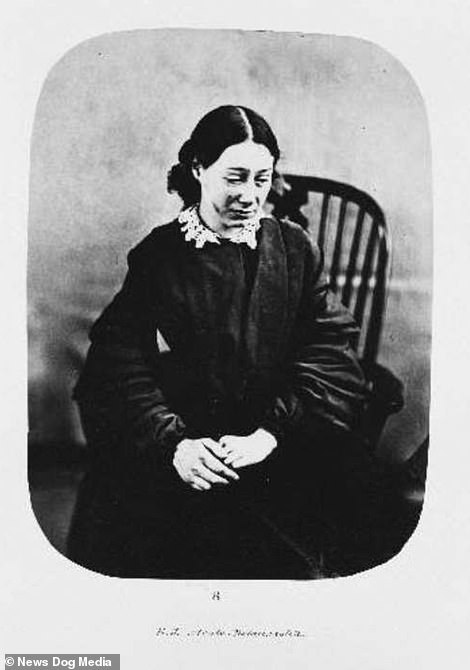 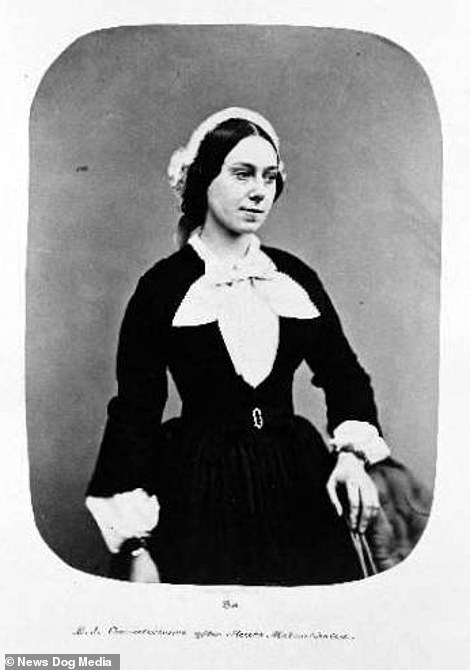 Eliza Josolyne was admitted to Bedlam in 1857 (left) and was diagnosed with acute melancholia. A few months after being admitted she seemed to have been in a much better condition (right).  She had to be kept in a padded room because she was knocking her head against the doors and walls. However by the summer when Hering took his second photograph, Josolyne had made a full recovery. She was now ‘generally cheerful and always industrious’ and working in the scullery. She was ‘recommended for the Incurable List’ and remained at a special ward in Bedlam until her death fifty years later 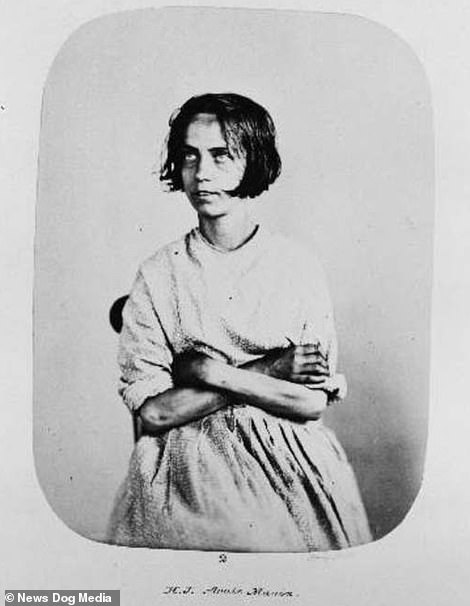 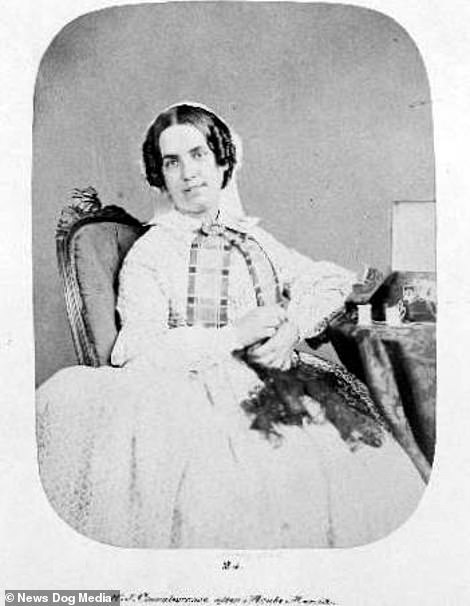 Harriet Jordan was admitted aged 24 in May 1958 (left) for acute mania. After just a few months of treatment she is pictured (right) smiling. In her before picture she appears to be frail and looks away from the camera as she crosses her arms. Just a few months after treatment, her old clothes seem to have been taken away and she is pictured in a dress and bonnet, smiling and looking directly at the camera. At the time doctors said she had gone through a staggering transformation from ‘insane to convalescent, quiet and well-behaved’ 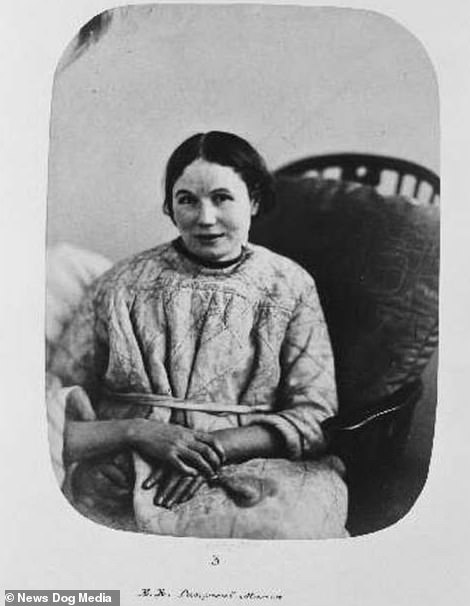 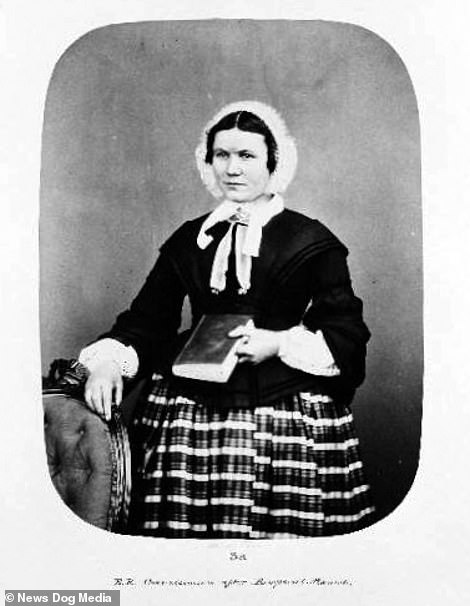 Emma Riches was admitted when she was 27-years-old (left). She is pictured (right) after her treatment, holding a book which symbolises she is ready to re-enter society.  She was first admitted to the mental hospital for ‘puerperal insanity’ – now known as ‘postnatal depression.’ She was admitted to Bedlam a total of four times during her life – after the birth of each of her four children. Her record states how during her time in Bedlam, Riches ‘never speaks nor appears to notice anything, she cares for nothing, will not eat unless she is forced to do so, nor dress nor undress herself…treatment drugs are ineffectual.’ Thankfully after a year in the hospital on her fourth admittance, she was returned to her children 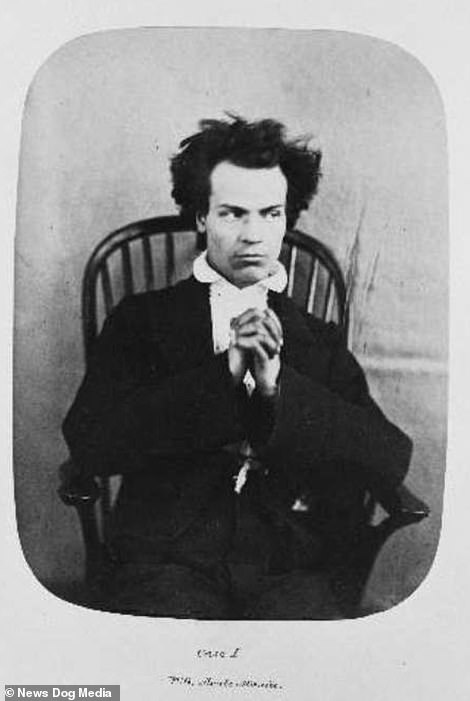 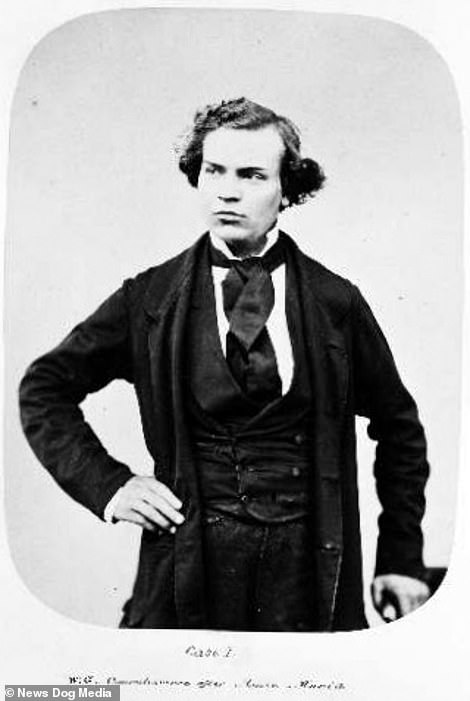 William Green was admitted when he was 33-years-old (left) in 1857 and a photo was also taken of him after his treatment (right). He was said to have been suffering from paroxysmal and intermittent mania. In his ‘before’ picture his hair seems to be static, his collar upturned and he looks to the side while clasping his hands together. In his ‘after’ picture he stands strong and looks to the side confidently, while placing one hand on his hip