After repeatedly foreshadowing a windback of the city's coronavirus restriction over the past week, Mr Andrews said on Sunday that an outbreak in Melbourne’s northern suburbs meant more time was needed. 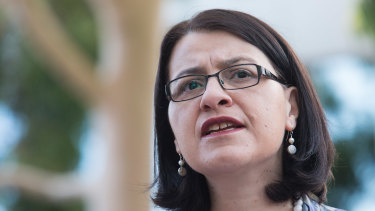 "I have nothing to say about those comments. Nothing whatsoever," he said.

Asked to explain that position, Mr Andrews said: "Because I have nothing to say about them. That’s a choice I’m making and I’m not going to sit here and be interrogated about why I’m not commenting on something – that doesn’t make any sense at all."

Federal Health Minister Greg Hunt said the only reason Victoria was not easing its lockdown was fear its contact tracing regime was not up to scratch.

"The only reason they wouldn't open up is if they didn't have confidence in their own contact tracing system," Mr Hunt said on Sunday.

The Commonwealth worked with Victoria since and the state’s system had "improved significantly" and further delays "would be profoundly disappointing and deeply concerning", he said.

"It is simply the case that on the balance of evidence and risk, Victoria is in a sufficiently strong place to replicate that which has occurred in NSW.

"NSW had a rolling average of over 10 cases a day for 24 consecutive days in late July and early August, and yet they were able to manage being predominantly open through a gold standard, world class contact tracing process."

The majority of NSW's cases are people who are in the state’s hotel quarantine system.

Mr Hunt said the Commonwealth chief medical officers requirement to ease restrictions, for under 10 active coronavirus cases, had been met – as well Victoria's own definition of under a rolling 14 day average of five cases.

"One was the localisation of the public health unit and tracing response. Two the full digitilasation, which is in particular where the chief scientist worked and three is in relation to the case management of individuals, as we saw this week in relation to the family in the northern suburbs of Melbourne."

"All Melburnians have done an amazing job to stop the spread of the virus and our rolling 14-day average is below 5," she said.

"Changing the goal posts is confidence shattering for businesses that are struggling to hold on. Every day is critical to keeping Melburnians in jobs and saving businesses."