As Australia shifted to “COVID normal” and life regained something like its regular rhythm for many families, workplace consultant Samantha Sutherland noticed a theme among her peers: the pandemic’s worst appeared to be behind us but working mothers, especially, still felt overwhelmed.

“I was hearing from friends that women are continuing to do more than they had been pre-COVID, had not been able to get back any sense of balance and were ignoring their own health to care for everyone else. 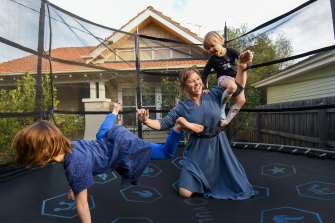 Physiology researcher Sarah Lockie, with Lillian-Euan and Vivienne, has found the after-effects of the pandemic tough enough to consider adjusting her career.Credit:Joe Armao

“A lot are so at capacity they don’t feel they want to continue full-time work, some are considering leaving the workplace,” says Sutherland, a diversity and inclusion consultant and single mother of one.

Anecdotes from women depleted by extra domestic chores and homeschooling for long stretches last year – moving their work home only to find “they got the kitchen table with the kids to manage around them and their partner got the home office, uninterrupted” – were common enough for Sutherland to decide to investigate.

She recruited a researcher and drafted a survey about women’s sense of wellbeing, sponsored and promoted by working women’s groups including Financial Executive Women, The LBD Group, The Remarkable Woman, Work180 and Circle In. The 1300 answers painted a picture of quiet desperation. 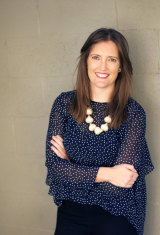 Samantha Sutherland commissioned research into how working mothers were feeling about work-life and wellbeing post-Australian pandemic after hearing peers say they felt overwhelmed.

“There are stories of women leaving work, considering giving up their career because they can’t cope with everything, and a lot of women who don’t want to go back as they can’t manage the different aspects in their life because they are still doing most of the stuff at home,” says Sutherland, who subtitled her Australian Women at Work report ‘Our 2020 Setback’.

“One in four are feeling overwhelmed most of the time, some of that comes from lack of support at home, 69 per cent are feeling like they are doing more parenting than their partners, 71 per cent neglect their own health while taking care of everyone else.”

Mental health experts including Professor Jayashri Kulkarni, who runs the Alfred Hospital’s women’s mental health clinic and is director of the Monash Alfred Psychiatry Research Centre, and Professor Kim Felmingham, director of Melbourne University’s Trauma, Anxiety and Stress Lab, say the anecdotal reports of heightened anxiety among women in the wake of the pandemic are consistent with what they are witnessing.

Kulkarni warned in late October that mental health services were being “absolutely flooded” by record numbers of women experiencing anxiety and depression and says the increased “mental burden” has manifested as ongoing anxiety.

“I optimistically thought when isolation and lockdown finished we would see an improvement in mental health, in fact we are still getting a lot of referrals and seeing women not yet back to pre-COVID normal functioning,” she says, adding that mental health issues often surface after a major crisis is largely resolved, as the pandemic appears to have been here. 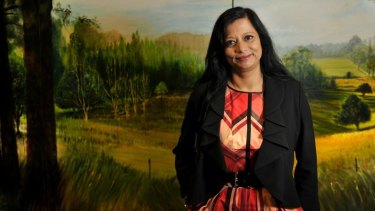 “We’re seeing the ramifications of lockdowns, a number of women are struggling with substance abuse, particularly alcohol. During lockdown there was a lot of anxiety and some self-medicated with increasing alcohol use, so now there are physical as well mental health issues to be dealt with.”

While other 2020 studies showed many fathers spent more time than usual on family duties, especially childcare (and some said they enjoyed that so much they intended to continue), research consistently found women shouldered most of the extra unpaid workload, contributing to what appears to be a burden of burnout.

Felmingham says trying to manage work expectations while also carrying most of homeschooling and increased household work – as several prominent studies found women did even in dual-income households – plus worry about financial stress and potential loss of employment upped women’s anxiety and depression.

I have two master’s degrees yet somehow I am now doing it all. How did this happen?

“Even if men were working at home they still weren’t overseeing the majority of the homeschooling or carrying the mental load. Effectively it doubled women’s workload and increased their stress levels,” she said.

The fact colleagues without childcare responsibilities could increase their productivity due to fewer distractions and less commuting also “contributed to anxiety for those who were struggling and felt they couldn’t acknowledge that, and there’s that overhanging fear”, Felmingham says.

In one study headed by Melbourne University sociology professor Lyn Craig, the extent of exasperation experienced by some women was clear.

Comments in her paper “Coronavirus Domestic Labour and Care: Gendered Roles Locked Down”  included: “I am angry, I am disillusioned, I am depressed … the feminist cause has been set back 10 years by this pandemic and the conditioning of our society (both for males and females) makes it blatantly obvious that gender equality is far from a reality.”

Others included: “I have two master’s degrees yet somehow I am now doing it all. How did this happen?″⁣, and “how can we have come so far only for it to matter so little when the chips are down?”

Sydney University Associate Professor Elizabeth Hill, co-convener of the Australian Work and Family Policy Roundtable, says even before the pandemic many working mothers were under serious, consistent stress due to taking on the lion’s share at home even if they were the breadwinner, thanks to the sticky nature of gender roles in Australian society.

“A lot of those comments [in Sutherland’s research] align very clearly with the pre-COVID experience of Australian women. Many were having difficulty reconciling work and care, it’s a dominant story: many were already clearly identifying they were struggling to manage and that our policy settings and workplace policies were inadequate,” she said.

A lot of working mothers are feeling exhausted, anxious, unsure and they’re rethinking how they’re going to do this.

“That’s the starting point; extreme forms of stress around managing … and then we have a crisis which led to job loss fear, economic insecurity and changes to working hours, rapid escalation of unpaid care and work that needed to be done. It’s no wonder now we’re on the other side of the peak that mothers are feeling a level of exhaustion. Something already very hard became harder.”

Sutherland’s poll “aligned with global meta-analyses that demonstrate there is a long tail to the impact on gender quality from financial crises”.

“We’ve got good data [on the impact on working mothers of COVID] from Lyn Craig and Leah Ruppanner, it’s unsurprising that a few months on when things are beginning to kind of settle down a lot of working mothers are feeling exhausted, anxious, unsure and they’re rethinking how they’re going to do this.

“The tail reflects global data which says the impact of economic crisis on gender inequality goes on for many years after the immediate crisis has ended. Hopefully we’re going to see things in next week’s [federal] budget, but policy makers need to be thinking about the impact into the next year or two and monitoring how that crisis is playing out in the labour market for Australian women.” 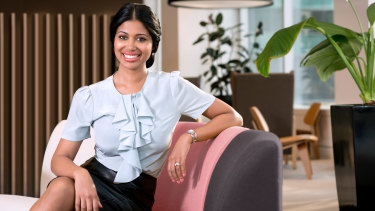 Shivani Gopal, CEO of the mentoring network The Remarkable Woman, says women in her 300,000-strong network are talking about being overwhelmed.

Members of her 300,000-strong online community spoke of companies installing software to measure keystrokes, which upped fear for those battling to cover their professional and home work and to compete with freer colleagues.

”Women in our community bore the brunt of the homeschooling and housework, and the most consistent thing we’re hearing from members of our community is, ‘I don’t have time for anything, no time to care for myself, no hobbies, or to care for my career and invest in going for the next promotion’.

“We are still hearing feedback that even though the transition back to work is happening and kids are back at school, that additional mental load hasn’t decreased,” she said.

Australia’s persistent male breadwinner model and the concept that fathers belong in the office and mothers can have more flexibility but must also run the home was contributing to the “COVID hangover”.

“People are just exhausted; they were living in crisis management for such a long time and what’s concerning me is women giving up on all the stuff that really matters to them as a result.”

She cautioned women against leaving work or scaling back and said a two-week complete break and chance to reset would be far healthier for their longterm economic wellbeing.

“If you are opting out because the overwhelm is so high right now there is a high chance of regret, and it being hard to opt back in. I advocate for women taking two weeks off and saying, ‘You know what? I just needed moment to refresh and recoup’ … and for more men stepping up and using [flexibility] policies which the ASX200 companies have, but which languish in HR portals.”

Physiology researcher Sarah Lockie, mother of two young children, said mental fatigue and anxiety from her 2020 work-life load had caused her to consider career change. ”A friend sent me a podcast on burnout and said, ‘You should listen to this’ and I was like, ‘This is me, I think I might actually be suffering from burnout.’

“There is the desire to run away, that it’s not worth it anymore, something I’ve worked really hard for 12 years to do. The thing COVID did to me was make me question if it is worth it, though I have always loved my job. There was some point when one of my kids said to me, ‘Mum, remember when you used to shower in the morning?’. I’m like, ‘yeah, sweetheart, I do’.”

Despite the large setback to her equilibrium, she is pushing through.

“I’m still here writing a grant application, I still find my work extremely rewarding and stimulating, I consider myself to be quite a tough and resilient person, but it’s really taking some time for me to process what I went through last year and feel capable and competent again.”